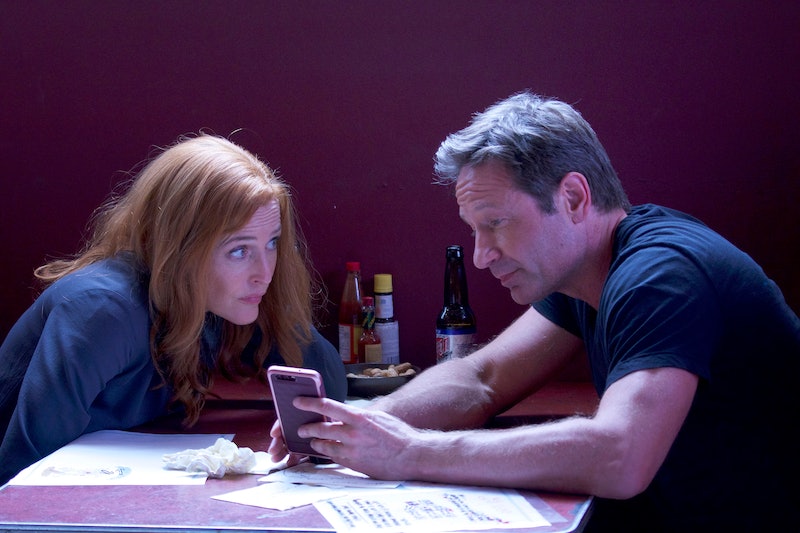 Dana Scully and Fox Mulder have possibly what is the sexiest sexless relationship of all television time. The tension and attraction between the two X-Files characters is enough to make a viewer break a sweat. The love that Mulder and Scully share is deep and intensely true, because they are total soulmates. Even their eye contact has such passion and desire that I have to look away so my retinas don't burn up. Which, if you think about it, would end up being an X-File.

While, unfortunately, Mulder and Scully won't be together romantically when the X-Files reboot comes around, you can still have hope that some sort of passionate rekindling will take place. Even if it doesn't, those two on-screen together is enough to get anyone's heart pitter-pattering or full-scale pounding. I'm breathing a little heavier just thinking about it and that's only 5% because I am suffering from a sinus infection. The other 95% is all anticipation for the greatest TV romance of all time to unfold again right before my very eyes.

But alas, the X-Files reboot doesn't hit television screens until Jan. 24, so until then, there is only one way to stave off this burning hunger fans feel inside: by revisiting the best Mulder/Scully moments of the series.

1. When Mulder Got Uncomfortably Close

That man has no scruples when it comes to invading Scully's personal space.

2. When They Had To Huddle For Warmth

In "Detour", the X- Files superduo find themselves stuck in the woods without anybody to help them out. They don't end up consumating their love, but snuggling is good enough for me.

In "Post-Modern Prometheus," Mulder and Scully wind up at a Cher concert with a monster called the Great Mutato. As they dance to the sweet, sweet sound of Cher's voice, joy fills my heart.

There is something incredibly romantic about the fact that Scully and Mulder rarely agree but still manage to work together to save the day. They balance each other out so perfectly.

5. And Even When They Agreed

After years of working together, Mulder and Scully developed a rhythm and an ability to communicate with just their eyes. Relationship goals, people.

6. When They Rushed To Each Other's Side

One of most common phrases uttered in the series is "where is she?!" Mulder is always trying to save Scully, and vice versa. And boy do they need the help, as those crazy kids can't seem to stop getting themselves into trouble.

7. When They Denied Their Love

Come on Mulder, the truth is out there. You guys are totally in love and it's so apparent. OK?

8. When They Spent Christmas Together

In a really fun monster-of-the week Christmas episode called "How the Ghosts Stole Christmas," Lily Tomlin and Edward Asner play ghostly lovers who try to convince Mulder and Scully to murder each other and then kill themselves. At the end, the duo decide to spend Christmas together sharing gifts they swore they wouldn't buy each other. Aww.

9. When They Almost Killed Each Other

There are a few times that infections, mind control, or something else get into the heads of the characters and make them want to kill each other. Luckily the whole "being soulmates" thing always beats out whatever supernatural entity is convincing them to murder. Love really does conquer all, at least if you are Fox Mulder and Dana Scully.

10. When Mulder Showed His Interest

it is known that Mulder is too busy chasing the truth to have a sex life. From time to time, though, he says some... interesting things to Scully. As you can see in this gif from "One Son," an episode where Mulder and Scully are falsely forced under quarantine, Mulder is not shy with his glances, and while it's a bit much at times, I don't mind it.

11. When They Actually Hooked Up

We're all thinking during this episode, "this is too good to be true." And sadly, it is.

It feels like fans have been waiting for centuries for the show's lead characters to get together for real, but whether or not Mulder and Scully work out their issues in the reboot, I will always be team Sculder.