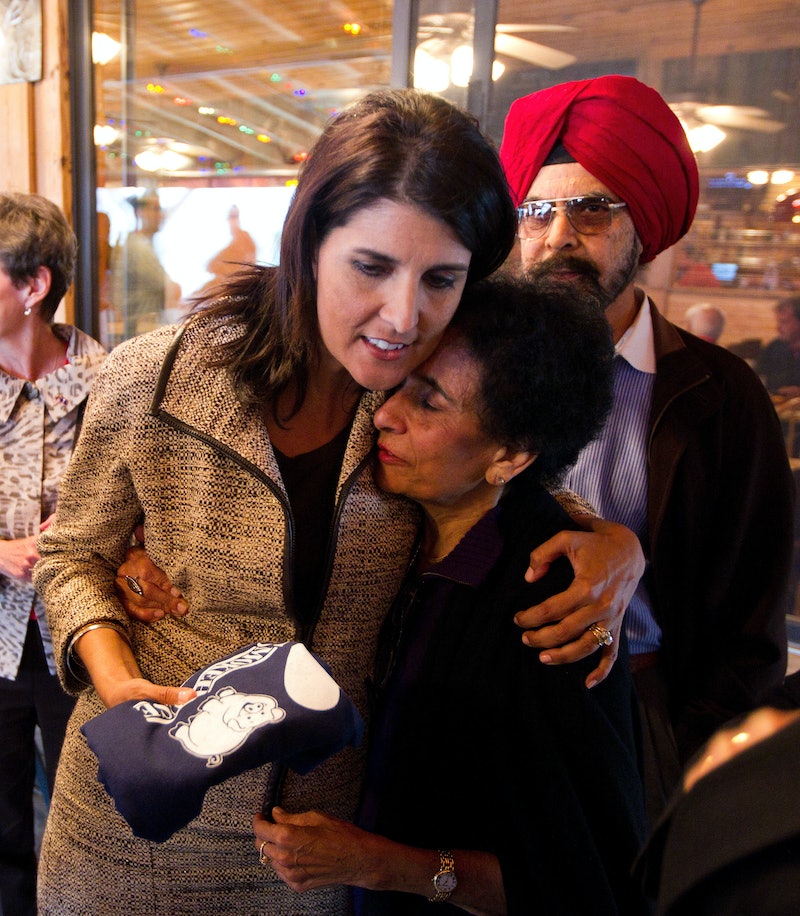 South Carolina governor Nikki Haley has impressed the nation in the past several months, most recently with her response to President Obama's final State of the Union address on behalf of the Republican Party. Haley, a potential vice presidential contender, rose to the position of governor in 2011 and made history as the state's first Indian-American leader and its first female leader. Her family has been the topic of interest in the media, given her Sikh Indian heritage, but who is Nikki Haley's mother?

Raj Kaur Randhawa was born in India and studied law at Delhi University. Randhawa emigrated from the Punjab with her husband Ajit in 1969. The couple first moved to Canada when Haley's father received a scholarship from the University of British Columbia. The family then moved to the United States so her father could teach at Voorhees College, a small school in the city of Denmark, South Carolina. The family settled there permanently, and Haley, her sister, and two brothers were born in Bamberg, South Carolina.

By all accounts, Randhawa and Haley have a strong relationship. As a young girl, when Haley was allegedly physically abused by a child-care provider, her mother was the first person to come to her defense. Randhawa raised three children and earned her masters' degree in education, then taught social studies for seven years. She then left teaching to start her own business, which originally started out as a gift store. Haley worked closely with her mother, and started handling the bookkeeping at age 13. After Haley graduated from Clemson University in 1994, she returned to the company to help turn it into a multi-million dollar enterprise, selling high-end clothing and jewelry.

The Randhawa family practices the Sikh religion, which emphasizes community and tradition. The religion is traditional to the Punjab region of India, and Haley stays connected to her heritage through her parents. "Ultimately my connection to my Indian-ness comes back to my mom and dad. They would all tell me and my siblings stories about their life in India so it was very close to my two brothers and my sister and I," Haley told The New York Times in an interview in 2012. Although Haley converted to Christianity, she and her husband married in both a Christian ceremony and a Sikh ceremony. The family attends services for both religions and stays active in the Sikh community.

Haley's star is on the rise within the Republican Party, but she still maintains strong connections with her family. She has already made history and set important precedent for Indian-Americans in government, and if she is chosen as the vice presidential nominee, it would be huge for minorities in the Republican Party.

More like this
What To Know About Martin Bashir After Watching 'The Crown'
By Bustle UK
Read Dan Levy's Heartbreaking Message After The Club Q Shooting
By Stephanie Topacio Long
Iran Has Issued A Death Sentence Over Mahsa Amini Protests
By Catharina Cheung, Darshita Goyal and Maxine Harrison
Kendall Jenner & Devin Booker’s Relationship Timeline From Start To Finish
By Jordyn Tilchen and Jake Viswanath
Get Even More From Bustle — Sign Up For The Newsletter