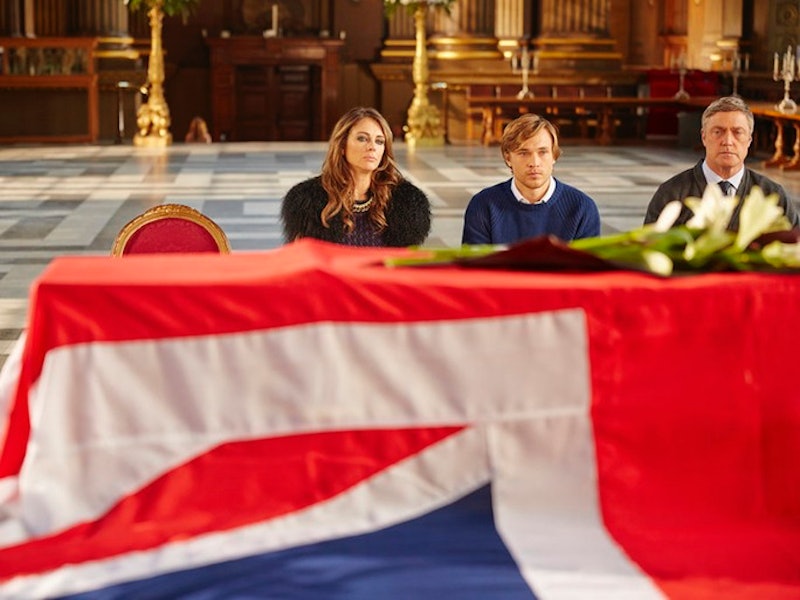 While The Royals has been priming viewers of the E! series to hope for Prince Liam to become king, fans should have been rooting for Prince Robert to rightfully claim his throne because the Season 2 finale of The Royals showed that Prince Robert could still be alive. The series premiere of The Royals dealt with the royal family discovering that the eldest prince had died, but that could not be the case since the end scene of the Jan. 17 episode "The Serpent That Did Sting Thy Father's Life" had a man lying on an abandoned beach with a helmet that had the name "R. Henstridge" on it.

When the man who claimed he was responsible for Prince Robert's death, Brandon Boone, returned to The Royals in Season 2, Loyals should have realized that something was up. Brandon's interaction with royal security detail Jasper and James Hill was amusing, but didn't seem necessary. However, it was actually a very helpful reminder since the Season 2 finale started with a flashback of Brandon remotely shooting down Prince Robert's plane. Brandon had told Eleanor and Jasper in Season 1 that he was ordered to take down the plane and had no idea that the heir to the British throne was on it. Since the Season 2 finale also showed a young Robert flying a paper plane around the palace, it was a massive hint that maybe viewers hadn't seen the last of Robert.

Robert has been a pivotal character in both seasons of The Royals, but the series has never revealed what the adult Robert looked like. Unfortunately, that didn't change at the end of Season 2 since the face of the man on the beach was never shown. But with the flashbacks and the military helmet, The Royals definitely wants fans to assume that when Robert's plane was shot down by Brandon, Robert landed — alive — on a desolate beach.

Since a significant chunk of time has passed since Robert was first reported dead in the series premiere, Robert is poised for a definite comeback in Season 3. (Though can I call it a comeback when he has never appeared on the show before??) If the man on the beach is in fact Robert, The Royals will need to explain where he has been all this time. Did he suffer amnesia from his crash? Did no one find him for awhile? Was he seriously hurt and didn't become conscious until now?

Regardless of how The Royals will explain the delayed discovery that Robert is alive, Loyals can take comfort in the fact that the mystery behind the firstborn son of Helena and Simon has been solved. After all the red herrings in Season 1, including Helena claiming that Robert had killed himself, the Season 2 finale showed that Pryce was really the one who ordered the prince's plane shot down. As long as the show doesn't add another paternity scandal with Prince Robert, then I guess it may be time to say farewell to #KingLiam and hello to #KingRobert.