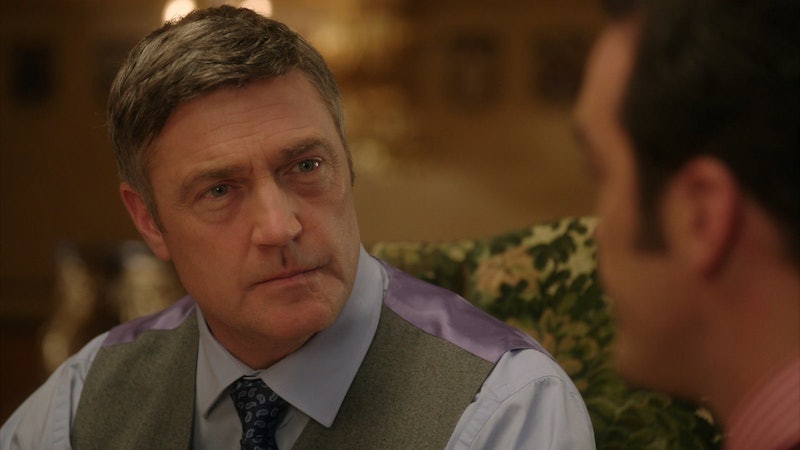 I had hoped that The Royals Season 2 finale would reveal that Liam and Eleanor's father was the deceased King Simon, but instead questions about who is alive and who is dead in the royal family were raised, including if King Simon could be alive on The Royals . In one of the final moments of "The Serpent That Did Sting Thy Father's Life" (yet again, Royals, well done on picking a perfect Hamlet quote for the episode title), Queen Helena went to her husband's tomb to retrieve his DNA so that she could prove that Eleanor and Liam were really his children. But after having sledgehammers taken to his tomb, an astounded Helena was shown looking into the newly-formed cavernous hole — making viewers assume that Simon's body is not where it should be.

Since Simon's son Robert may still be alive, it's no wonder that the tease of the king's missing bones would make fans think that Simon could also somehow be living. I've been curious about the actor who portrayed King Simon, Vincent Regan, since he presumably had to shoot new scenes for Season 2 of The Royals. (The video of him being stabbed by Ted Pryce wasn't shown in Season 1). If Regan had been on the set of The Royals in Season 2, could that mean the actor would be back for Season 3? And furthermore, that his character is still alive? Unfortunately, Regan's presence in Season 2 isn't necessarily a solid clue to the living status of King Simon and no evidence of Simon still being alive had ever been presented before the Season 2 finale. But that didn't stop Loyals from taking to Twitter to theorize.

Rather than say he is alive, I am much more inclined to say that someone had King Simon's dead body moved when it was supposed to be placed in his tomb. Since proving that Simon was the father of Eleanor and Liam could dethrone Cyrus, it's not even remotely outrageous to think that Cyrus could have had his brother's body relocated somewhere secret to secure his claim to the throne — especially when the Season 2 finale showed what lengths Helena is willing to go in taking down Cyrus. The power struggle between Cyrus and Helena is one of the driving forces behind The Royals, so any evidence that could possibly place Helena's children in the position of power would have Cyrus doing manic things — like snatching his brother's dead body.

As Loyals will have to wait a long time to see what happened to King Simon's body, speculating about him being alive may be the best way to cope. I'm putting my money on him being dead, but trust me — there is no solace in that since it also means that The Royals will keep the paternity of Liam and Eleanor unknown for even longer.