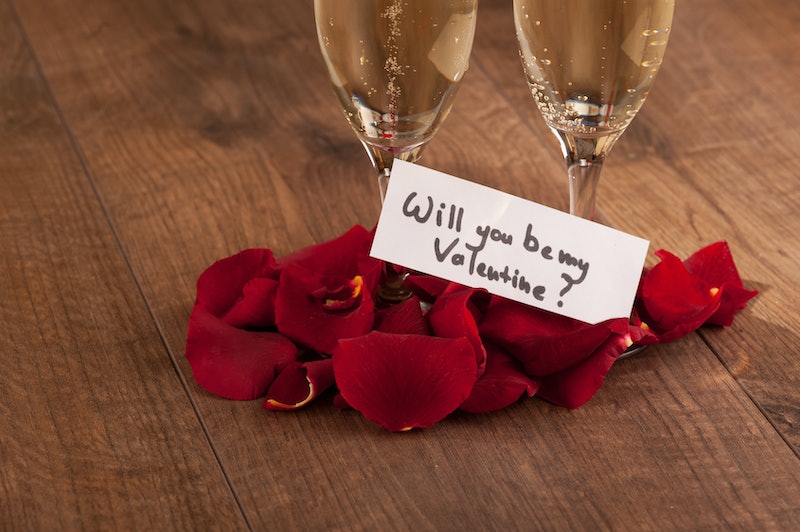 Whether you love Valentine’s Day or you couldn’t care less about heart-shaped balloons and sappy cards, the holiday is coming regardless. Valentine's Day is so ingrained in our society that you may not have stopped to think about why we celebrate Valentine’s Day in the first place — except for as an excuse to eat a whole box of chocolates by ourselves, of course.

The history of Valentine’s Day is long and kind of convoluted. It’s hard to tell what is actual historical fact and what is pick-and-choose history when religion and centuries of retranslated records are involved. And I’m sure most of us have heard one story or another about how this holiday came into being — obviously a dude named Valentine was involved. On the whole though, we’re all either too cynical over the commercializing of a holiday that, for some reason, is supposed to be about love, or too entranced with fancy dinners and bling-bling to care why Valentine’s Day has remained a holiday for so long.

Well, allow me to wade through centuries of history and legend in order to give you a brief lesson on the origins of this pink and red soaked holiday we call Valentine’s Day. Best enjoyed with chocolate and wine!

Was Valentine’s Day always on Feb. 14?

No, actually. Like many modern holidays — looking at you Halloween and Christmas — Valentine’s Day originated as a pagan holiday that was turned into a Christian affair. It was easier to convert people if they didn’t have to learn all new holiday dates, after all. Funnily enough, the Romans may have adapted it from an ancient Greek holiday, so obviously the whole rebranding of holidays process works.

You may be familiar with Lupercalia from Shakespeare’s Julius Caesar, since it’s at the festival that Caesar refuses the crown from Mark Anthony. Originally called Lupercalia, the holiday was celebrated on February 13 to 15, and was aimed at purifying community and promoting fertility. The festivial included the sacrifice of two goats and a dog, a feast, and then a sort of weird, naked marathon where men, donning the skins of the sacrificed goats, would run through the city and whip people. Young girls and women would reportedly line up along their route to get whipped, since it was supposed to ensure fertility and ease the pain of childbirth.

Lupercalia was celebrated from the founding of Rome up until the fifth century (150 years after Christianity was made legal by Emperor Constantine, by the way), until the burgeoning Christians began to associate it with the story of St. Valentine.

So, who was St. Valentine?

Since naked whipping and the worshipping of wolf gods didn’t exactly fly with the early Christians, they tried to slowly phase out Lupercalia in favor of celebrating St. Valentine. According to stories, Valentine lived in the third century during the time of Roman Emperor Claudius II, and was martyred for performing secret marriages after Claudius outlawed young men (and potential soldiers) from getting hitched. This doesn’t seem to be true, since no marriage ban was ever issued. In fact, Claudius encouraged his soldiers to take multiple wives from the conquered Goths. To complicate matters, there are records of several saints by the name of Valentine.

One of the Valentines was supposedly executed after being asked by Claudius to convert to paganism, and in turn Valentine tried to convert Claudius. Valentine was said to also cure the jailer’s daughter Julia of blindness, fell in love with her, and wrote her a note that was signed “From your Valentine.” There is a lot of debate and unreliable sources when it comes to whether or not the St. Valentine the Christians associated with Lupercalia actually existed, but the holiday has obviously stuck.

When did people start to celebrate Valentine’s Day?

Pope Gelasius I officially declared February 14 St. Valentine’s Day near the end of the fifth century, but it wasn’t until the Middle Ages that people started to see it as a day of romance. Written Valentines began being given around 1400 — usually in the form of poems — but since the majority of the population couldn’t read, verbal Valentine’s Day greetings were more common.

Valentine’s Day as we know it didn’t really become popular until the middle of the 18th century in Great Britain, when friends and lovers exchanged small tokens of affection and little notes. By the 19th century, printed cards were widely available and Esther A. Howland started the New England Valentine Company — the first company to mass produce Valentine’s Day cards.

These days, people all over the world celebrate V-Day in one way or another — the Greeting Card Association estimates that more than one billion cards are sent each year, and the average American spends about $126.03 on gifts, dinner, and other Valentine’s Day stuff.

More like this
23 Super Sweet Things To Write In A Valentine's Day Card
By Karen Belz and Lexi Inks
12 Aphrodisiac Desserts To Spice Up Your Valentine’s Day
By Kaitlyn Wylde
The Best Press-On Nails For Valentine's Day 2023
By Audrey Noble
15 Black-Owned Liquor & Wine Brands To Add To Your Bar Cart
By Alexis Morillo
Get Even More From Bustle — Sign Up For The Newsletter
From hair trends to relationship advice, our daily newsletter has everything you need to sound like a person who’s on TikTok, even if you aren’t.