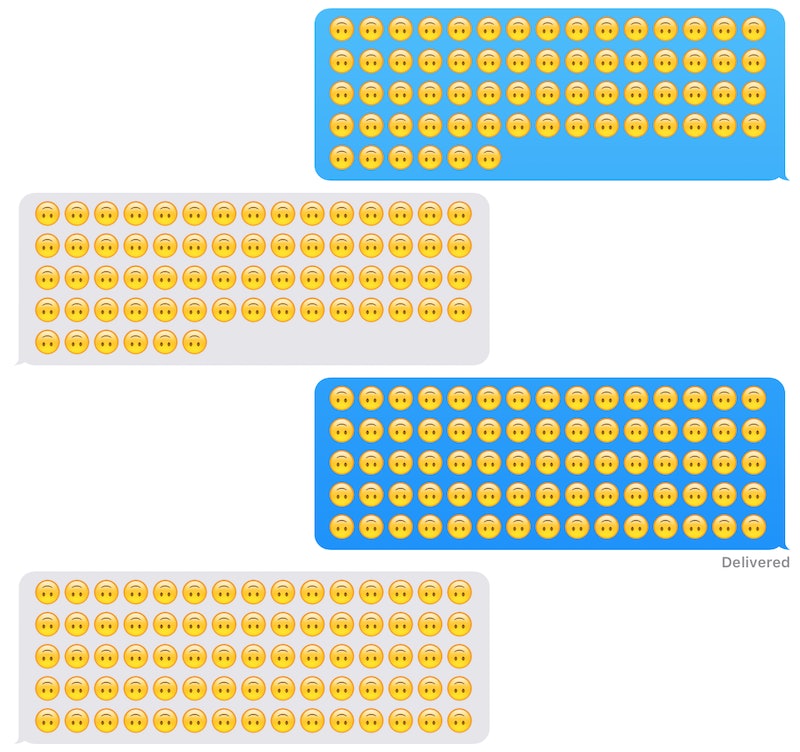 There are some emoji in this world whose meanings couldn't be clearer — the taco emoji is meant to depict a taco, the lips usually indicate flirtatious kissing, and a red heart shows a love that burns deeply and true. But there are some emoji that don't have such apparent meanings or obvious interpretations. For example, what does the upside down face emoji mean? The little critter made its way into our sparkling pink hearts with the iOS 9 update back in October and has been piquing our interests and showing up on our keyboards ever since.

Of course, the upside down face emoji isn't the only emoji with a vague or fluid meaning. No one really knows what to do with the wind-blowing face, for example, and I've seen the face without a mouth used in several different ways. Other emoji people remain hopelessly confused about include the information desk person, the man in a business suit levitating, all the uses for all the cats, all the uses for all the trains, and the most baffling one I've personally encountered, the oil drum. Because really, how would anyone know that's an oil drum? It's just a small, blue cylinder! What are we supposed to do with that?

But in a world where emoji are enhancing our every sentence and even supplanting actual words, it's important to understand where some of our favorites come from and what they might mean. Let's take a closer look at the upside down face emoji to better understand the little pictogram.

The upside down face emoji first appeared in October 2015 with the iOS 9.1 update for Apple and in December 2015 with 6.0.1 for Android. Around this time, Twitter also rolled out custom emoji called Twemoji 2.0, which include an upside down face. Basically, as the world was gearing up for 2016, we were just starting to turn our heads upside down.

How Is It Being used?

It's interesting to note all the different ways people are using the upside down face emoji on different online platforms. On Twitter, for the most part, people often use it sarcastically or snarkily. For example:

Though the upside down emoji is indeed smiling, none of these tweets make it seem like any of these people are particularly happy about any of the things they mention. On Instagram, meanwhile, the upside down emoji seems to show up most with selfies or group pics; the sarcasm shown on Twitter isn't too present on this photo sharing platform. Meanwhile, there are no results for the upside down face on YouTube or Yelp, which just reflects its newness and the fact that, well, no one really knows what it's for.

So What Does It Actually Mean?

According to Emojipedia, the upside down face emoji is meant to represent silliness or goofiness, which is certainly one way to use it effectively. Using it sarcastically or with snark is also a common usage, and implies that you're smiling through your tears or keeping a pleasant face before you absolutely lose control of your emotions. For example: