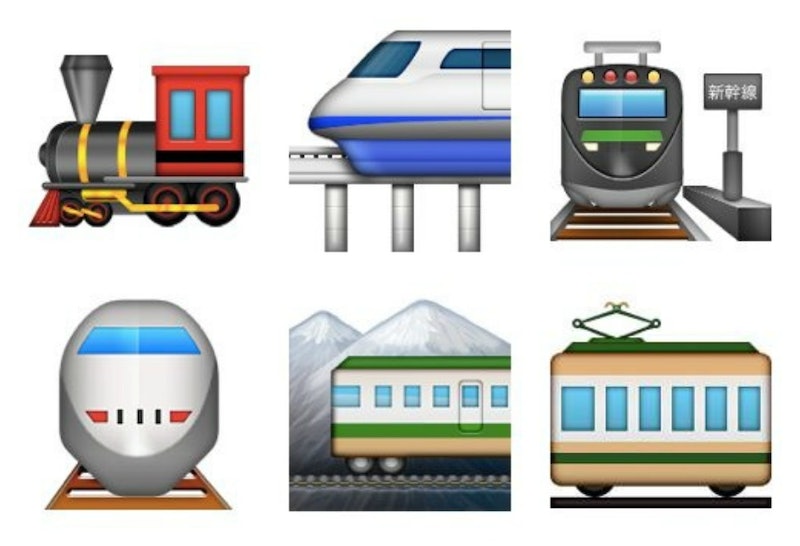 Last week, I took the gruesome liberty of interpreting what all nine of the cat emoji mean, including subtleties between the smiling cat emoji with open mouth and grinning cat emoji with smiley eyes. After careful inspection of the nuances between the cat emoji, it's apparent that all of them can be used for slightly different things and therefore are totally necessary — but what about, for example, the necessity of all 12 train emojis? It is one of the most hotly debated topics in emoji-land: How do we not have a taco emoji (yet... but it's on the way soon!), and yet we do somehow have 12 different trains to represent a method of travel that's a little bit outdated anyway?

The train and cat emoji aren't the only ones represented in excess. We also see an abundance of crying faces, trees, fowers, hearts, houses, and square symbols, the usage of which still remains a bit of a mystery to me. An argument can be made that even though the emoji all look very similar, they could all have very different nuanced meanings, just as synonyms do in the spoken and written english language.

So what do all of these 12 different emojis mean? And do there need to be so many of them? Let's dissect each one to find out, via the indispensible Emojipedia.

The railway car emoji (also known as the railroad car emoji) is a carriage that is generally pulled along a railway line by a locomotive. Because of the windows on this emoji, it seems to be a passenger car, but locomotive-powered trains can also carry cargo.

This emoji may either represent traveling through the mountains or a funicular, which is a cable railway that moves small trains up and down steep slopes. There aren't a huge number of funiculars in North America, but they seem to be more popular in Europe.

Though there isn't actually any steam coming out of it, this locomotive represents an early train powered by coal or wood. Nowadays, locomotives are fired by engines or diesel; steam trains haven't been widely used widely since the early 1900s.

Almost entirely indistinguishable from the railway car, the tram is used to represent a trolley-like train found on city streets in urban areas. Some cities with tram systems include Seattle, Boston, and Los Angeles.

Monorails are single-track trains used to travel very short distances. They're often used in theme parks like Disney World to transport visitors from one section of the park to another, or as tourist attractions in downtown centers of cities. Seattle, for example, has a famous monorail connecting one part of the city to another.

High speed trains, which are often curved at the nose like this one, can move around 130 miles per hour. The majority of these kinds of trains, which are also frequently referred to as "bullet trains," are found in Europe and Asia.

This train is seemingly no different from the high-speed train; it just has a slightly different nose. Why do we need emoji for both? No idea.

This is actually just a train with an unspecified purpose. I think we're starting to push it now, Unicode.

The metro emoji seems to be the most useful one so far: It can be used to depict an urban subway system anywhere. Bostonians, New Yorkers, D.C. residents, and Londoners can all get a lot of use out of this emoji, as millions of people in those cities frequently use the subway.

The light rail is pretty similar to the monorail in that it goes short distances on a track network totally separate from other traffic.

Though technically this emoji can be construed as a depiction of a place and not the train itself, I'm counting it as a train emoji because it shows one pulling up to a station. It's different enough from the other train emoji that its use seems justified.

So what can we conclude from this brief analysis of the train emoji? In short: We definitely don't need all 12. Some of them repeat; some of them are extremely outdated; and some of them are barely used in real life. So let's all petition to trim some of the fat and make room for life more important emoji, like tacos, white wine, and Netflix emoji. Who's with me?