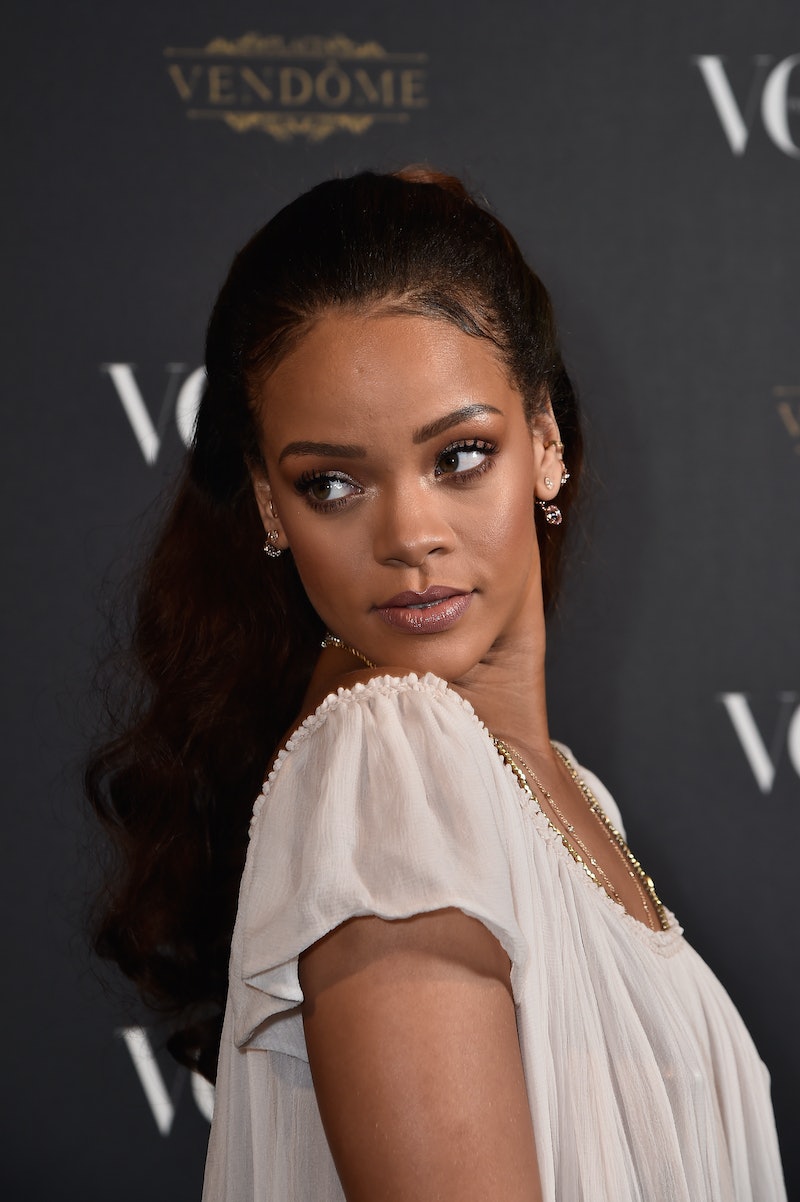 Is 2016 the year we'll finally get to hear Rihanna's long-awaited new album, ANTI ? The superstar's recent commercial for Super Bowl 50 and the 2016 Grammys is giving fans hope. In the spot, which premiered over the weekend, three CBS sportscasters — Phil Simms, James Brown, and Jim Nantz — face off against Rihanna in a coin toss officiated by none other than Late Show host Stephen Colbert. (The dudes are representing the Super Bowl, and Rihanna is representing the Grammys.) When the 27-year-old "FourFiveSeconds" singer tragically loses the toss, Nantz tells her proudly, "We go first." She smirks and says with a shrug, "I'm worth the wait." So, what does this commercial mean, exactly? Is Rihanna performing at the Super Bowl? Or is Rihanna performing at the Grammys?

ALSO, WHAT IF RIHANNA SURPRISES US ALL AND RELEASES ANTI ON GRAMMY NIGHT? Wouldn't you just explode from happiness?? Sorry, I got a little carried away there — blame it on the power of Queen Rih. The way I see it, this ad can be interpreted in two different ways...

First, at the end of 2015, it was rumored that both Beyoncé and Rihanna were in talks to join Coldplay for the upcoming Super Bowl 50 halftime show. Since then, we've learned that Bey is, in fact, returning to the halftime show stage. She's a fantastic live performer, a former Super Bowl headliner, and an uncredited vocalist on Coldplay's latest album, A Head Full of Dreams, so her involvement makes perfect sense.

Does Rihanna's appearance in this commercial mean she's performing at the Super Bowl, as well? After all, she's also a fantastic live performer, and she collaborated with Coldplay on their song "Princess of China" in 2011. It's definitely a possibility, but I think it's much more likely that Rihanna's going to make a splash at the Grammys.

Here's why: In the commercial, Nantz tells Rihanna, "We go first." And he's absolutely right! Super Bowl 50 airs on Sun., Feb. 7 on CBS — a week and a day before the 2016 Grammys air on Mon., Feb. 15. I have to assume Rihanna's "I'm worth the wait" comment means we won't see her on our television screens until after the big foosball game. That's my read of the situation, anyway.

If Rihanna does end up performing at the 2016 Grammys, what will she sing? She hasn't put out a new song since "American Oxygen" in April 2015! There's always the possibility that she'll trot out an old tune (boring!) or sing a tribute to another artist (meh), but I'm crossing my fingers she'll debut her rumored new track with Drake, "Work." I think a Grammys performance would be the perfect way to launch the song. Stay tuned.

Oh, and wouldn't it be just blissful if Rihanna decided to take mercy on her legions of music-starved fans and released ANTI on Grammy night? Can you even imagine the online pandemonium? The meltdowns? It would be, in a word, glorious.

As usual, I'll try not to get my hopes up... but something's gotta be happening soon, right? Right?? Hang in there, Navy. I have a hunch Rihanna's going to be very good to us in 2016.

More like this
Joe Alwyn Reacts To Taylor Swift Earning An NYU Doctorate In A Rare Interview
By Jake Viswanath and Nicole Pomarico
Rihanna Is A Mom Now After Giving Birth To Her First Baby With A$AP Rocky
By Ananya Panchal and Jake Viswanath
Taylor Swift, Kerry Washington & More Speak Out On Uvalde Mass Shooting
By Jake Viswanath
Are Tom Daley & Louis Theroux Bound For 'Strictly'?
By El Hunt
Get Even More From Bustle — Sign Up For The Newsletter