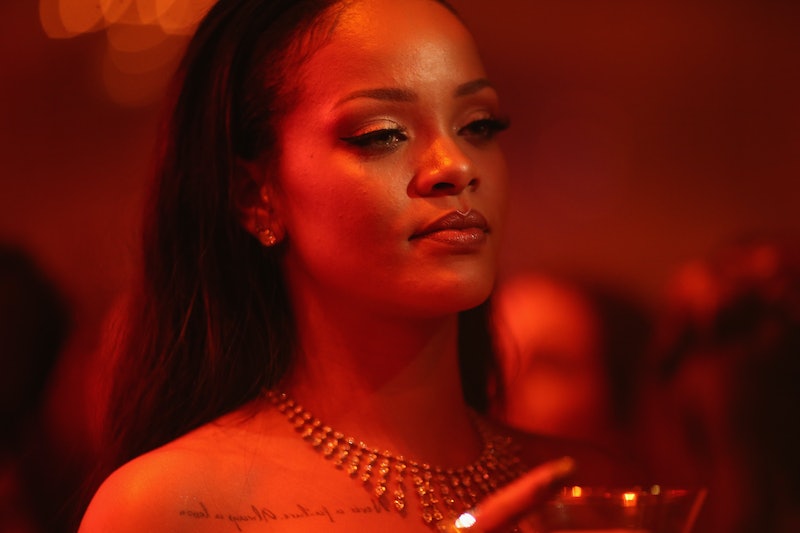 For months, one question has been on every pop music fan's mind: When is Rihanna's new album, ANTI, coming out? Sadly, no one has a clue! The project has been rumored to be coming "soon" for over a year now, but it's still nowhere to be found. Confusingly, at the end of November, the 27-year-old pop star launched ANTIdiaRY.com, a promotional website filled with bizarre images and videos that many people (myself included) thought signaled the LP's impending premiere. But, obviously, people were wrong. What gives? Believe it or not, the campaign for Rih's long-awaited eighth collection just got a whole lot more perplexing: Music producer Glass John claims rapper Travis Scott delayed ANTI. Wait... what?

OK, here's what you need to know about this latest development: Glass John is a record producer who allegedly worked on a song called "Kiss It Better" for ANTI. (You may recall that Rihanna seemingly teased the track on Instagram in December 2014.) Travis Scott is, of course, a rapper who has been romantically linked to Rihanna in recent months. Got it? Good.

On Dec. 26, John took to Twitter to say that ANTI was supposed to drop on Nov. 6, and then later on Christmas Day, but Scott allegedly "keeps putting doubt" in Rihanna's mind:

He also tweeted that "Kiss It Better" was set to be released as ANTI's lead single in 2014, but Scott somehow "prevented" it from happening:

Oh, and as if this whole situation weren't already strange enough, John kept referring to Rihanna as his "wife":

Needless to say, John doesn't seem to think much of Scott...

Later, he claimed to be on a conference call with Rihanna "trying to convince" Roc Nation label head Jay-Z to release ANTI:

He alleged that he'd told Rih he was going to make these statements:

And then, he hit the "caps lock" key and really went to town:

Whoa. So, is what John wrote true? Is Scott responsible for delaying ANTI? At this point, it's impossible to say — but the 23-year-old rapper isn't taking the accusations lying down. According to XXL, Scott simply told his Snapchat followers Tuesday, "Don't believe this s***." I wish Rihanna would step in and clear up this mess.

After the release of "FourFiveSeconds," "American Oxygen," and "Bitch Better Have My Money," it seemed certain that ANTI would arrive in 2015. But, it's now Dec. 31, and the album is still MIA. Perhaps RihRih has a New Year's Eve surprise up her sleeve? Hey, a guy can dream! Hopefully, the singer's fans will have a lot to look forward to in 2016.