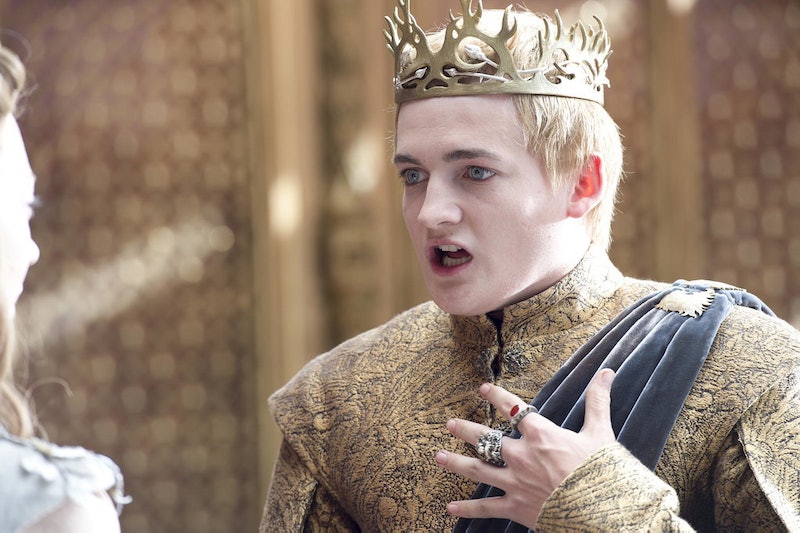 Another year, another bloody, death-filled Game of Thrones season. Although the show's most recent ten episodes may have been short on sex scenes, they certainly didn't want for violence — not that that's a bad thing. What would Thrones be without a massive scythe taking out twenty Wildlings at once or a beloved character getting his eyes pushed right out of his head? Not a show we'd want to see, that's for sure (just kidding. We'd totally watch it, and we'd probably have a lot less nightmares).

Sunday's finale was one of the series' deadliest episodes yet, filled with brutal fights, violent attacks, and some pretty scary looking weapons. In just one night, Thrones lost some of its most important characters, from Tywin Lannister (finally!) to The Hound (R.I.P., you lovable monster). It was a tough hour of television, and the culmination of a gruesome season in which character after character was killed thanks to George R.R. Martin's brilliant, twisted mind. Now that yet another season has come to a mournful end, let's take a look back at the eight most major Game of Thrones characters we lost this past year, from least missed to most:

Method of Death: Poisoned at his own wedding by Littlefinger and Lady Olenna, although that wasn't discovered until later.

Deserved? Oh, yeah. Joffrey was Thrones' most hated character, and it was nothing less than a pleasure to see the King finally, and so publicly, get what was coming to him.

Legacy: We'll miss Jack Gleeson, but as for Joffrey, Westeros is a much better place without him as ruler.

Method of Death: Tossed down the Moon Door by Littlefinger.

Deserved? Yup. Lysa was crazy, in a murderous, still-breastfeeding-my-10-year-old kind of way.

Legacy: Robin's even more screwed up than before.

Method of Death: Shot with a crossbow by his own son. While sitting on the toilet.

Deserved? Oh, yes. Tywin was a cruel, ruthless man, and it was fitting that the person who killed him was the son he'd not-so-subtly wished dead his entire life.

Legacy: He may have been terrible, but he was funny. Thrones will be a lot less wittier without Tywin's one-liners and dirty looks. We'll miss that guy, even if he was the world's worst dad.

Method of Death: Strangled by Tyrion while waiting in bed for his father. Ew.

Deserved? Somewhat. Shae was a likable character up until she turned on Tyrion and helped sentence him to death. She may not have needed such a violent death, but we wasn't too sad to see her go.

Legacy: Her death, along with Tywin's, will undoubtedly have a huge effect on Tyrion, who's now murdered two of the most important people in his life.

Method of Death: Lost a fight to Brienne, and (probably) succumbed to his many wounds.

Deserved? Yeah, but... look, The Hound was no angel — he killed the butcher's boy and did whatever Joffrey said, among other crimes. Yet he cared about Arya, and he made us laugh.

Legacy: Poor Arya's lost another companion, and even if he was a name on her list, that's a whole lot of death for a pre-teen to take. That is, if he died; it's a TV rule of thumb that if you don't actually see a character die, there's a big chance they'll be alive next season.

Method of Death: Shot through the heart by a member of the Watch, while working up the courage to murder Jon Snow.

Deserved? Yeah, but that doesn't mean we wanted to see it happen. Ygritte may have killed plenty of innocents, but she was also Jon Snow's true love.

Legacy: She left Jon Snow a different man, and will forever be one of the most badass characters to grace Game of Thrones.

Method of Death: Got his skull crushed in by The Mountain in the scene you're still trying to forget.

Deserved? No, no, no. Oberyn was funny and handsome and Tyrion's champion. He was a beacon of hope in the dark, dreary Thrones, and then he died a brutal, horrific death.

Legacy: He fought valiantly for Tyrion, and, despite the loss, the Lannister brother managed to make it out alive, so his actions weren't all for naught.

Method of Death: Stabbed by a wight, then had his throat slit by his sister in an act of mercy.

Deserved? NO. Jojen was the best. YOU DON'T KILL THE KID FROM LOVE, ACTUALLY .

Legacy: Thank god Bran found the three-eyed raven guy, because without Jojen to guide him, he would've wandered off the Wall ages ago.