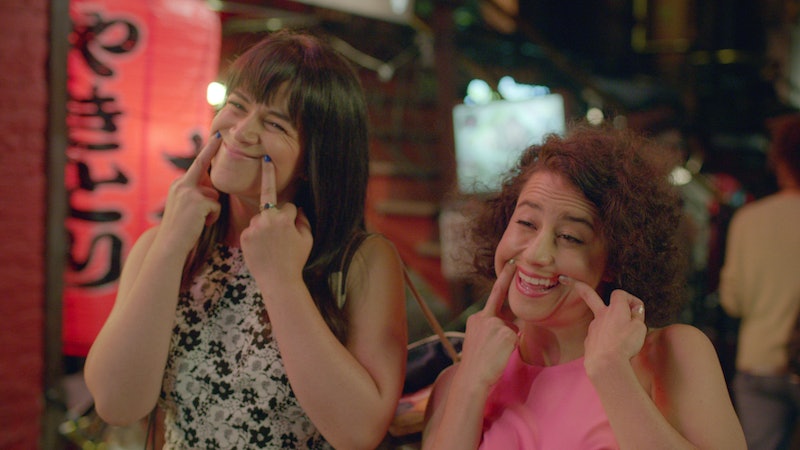 Whatever you may call marijuana — Black Russian, Acapulco Gold, Chronic, reefer, Mary Jane, grass, pot, weed — there are, admittedly, a few drawbacks. The main one is that weed is still looked down upon as primarily a "bad drug" by the majority of people. The second is that being a stoner lends one to being scared of random, borderline irrational things. Ever since moving to California, my relationship to weed has become much more relaxed. It seems to be widely accepted as a recreational drug. It gets pulled out at parties without a second of hesitation and people aren't judging each other for its usage. Seems like a pretty great state to live in, right? While I'm not here to argue the merits of marijuana (although I have many friends who would love to do that), I am simply here as a curator of facts.

Fact One: there are purses out there that are designed specifically to hide the smell of weed, while at the same time looking stylish as all hell. Fact Two: no matter where you live in the United States, buying and smoking weed is an ordeal. Fact Three: all stoners are afraid of the same things. So sit back, light up, relax and see if you can think of any more things I can add to this list.

1. Co-Workers Finding Out You Smoke

It's always a little scary to have your co-workers find out that you like to blaze it up on the weekends. And on the weekdays. And ... basically all the time. It's also amazing when your co-workers knowingly nod along and admit that they too Puff The Magic Dragon. Having them know is directly up to you and how well you hide your habit. Just know that your excuse of having "really dry eyes" isn't fooling anyone.

2. People Smelling Weed On You

Thankfully, I've never experienced someone pointing out that I smell like weed. But I have been the person pointing it out to others on the bus, during an Alt-J concert at the Hollywood Bowl, in movie theaters, and even while walking down a residential street in West Hollywood. The distinct odor lies somewhere between incense and skunk. You cannot miss it. If you are a seasoned smoker, the smell will make you smile. If you are not, you will want to gag. Stoners never want to be the ones making people gag. You don't want to draw attention to yourself, lest you also bring attention from cops.

Stoners are always afraid of the label. Television and film depicts us as couch potatoes with very few goals. But let me tell you something people, stoners are usually the ones thinking of the coolest stuff. Sure, we might like a quite night in, watching old cartoons over clubs, but we are not useless. Who else will point out that our universe can be a tiny atom of a giant being, and that all of our atoms can also be their own universes? Your science professors, and us. You are welcome.

It's the uniform. It's the authority. It's the way that they ask you for your license and registration with no promise of stripping. Cops are scary and I don't like being near them.

There is nothing worse than being pulled into a paranoid reality by a song with police sirens in them. Nothing. There you are, enjoying the road passing you by as your friend drives you to the nearest fast food joint. Suddenly, you hear sirens. You look around trying to spot where the sound is coming from, only to see that it was the car's very own stereo. Ugh, the worst.

When you first start smoking you are always concerned that you are doing it right. Are you inhaling it the right way? Are you calling it by the proper name? Are you passing it in the right direction? You get so caught up in the process that you forget to enjoy it. Luckily, that soon fades away and is replaced by the golden rules of Puff, Puff, Pass and lighter etiquette. Number one rule when you are smoking with stoners — chill the fuck out and enjoy it.

If you are a stoner and get your friends to smoke with you, there will always be a pressure. Now the game rests on your shoulders. You need to show them the proper technique, and not cough at the same time — lest they think you're a noob. Suddenly, all eyes are on you and all you wanted was to was have a nice relaxing night.

First of all, losing anything while being high is not fun. Not having a lighter is monumentally not fun. You got everything ready for a night of blazing and then you realize you lost your lighter. Bummer. You'll have to improvise by finding matches, lighter fluid, or in my case — rolling up a piece of paper and setting it on fire using your stove top. Hold your applause and panties. (Also, for the love of weed, kids, don't try that at home.)

Ah! The infamous white lighter. When someone busts one out during a That 70's Show-esque basement sit-down, stoners will unanimously comment. Why did you bring it? Don't you know it's really bad luck? It's never my favorite way to start the day.

10. A Store Not Having Your Munchie Favorite

Ever since they cancelled my favorite cookie-flavored cereal, I've been in deep sh*t when it comes to munchie foods. You never want to have too much at your own house because that would be too tempting, yet you also don't want to find out that the store you walked all the way to is out of your favorite flavor of ice-cream. It's a sad fear that never really goes away.

Any stoner will tell you, outright, having to complete any kind of transaction (including movie ticket purchases) are the worst. The best explanation of this fear comes from non-other than Louis C.K. during an interview with Jerry Seinfeld.

You always think the other person knows you are stoned and you can't read their facial expressions really well. It's a nightmare that needs to be avoided at all times. Self checkout lanes basically eliminated that problem for food. I can tell you that there is nothing worse than automated checkout counters when you're high. You always get something wrong and end up having to summon a worker and everything becomes a giant mess.

12. Writing Something Not Funny That You Thought Was Funny When You Were High

A lot of people love to write when they are high. Problem with that is that being high makes you laugh at dumb things. Things you wouldn't really laugh at sober. You never want to second guess your writing because you are afraid it was only funny because you were high at the time.

13. Your Dealer Getting Busted

Who will provide for you if he or she is busted? Will it get traced back to you? Even dispensaries are affected by raids, so that fear is ever present no matter what part of the country you are at.

14. Your Dealer Ripping You Off

Unless you are an expect negotiator, always looking for a fight, being ripped off sucks. When you first start smoking, you will take your dealer's words as fact. I'm sure I overpaid for dime bags at multiple points in my life but didn't say anything because I was afraid of getting on their bad side.

15. Your Dealer Hanging Around Your Apartment After Your Buy Weed

On the other hand, there is a real fear of getting too friendly with your dealer — otherwise known as pulling a James Franco. You are always way too nice to your drug dealer because he or she is providing an illegal service. You always end up afraid that you're getting too chummy with the business. I don't see myself inviting the sandwich guy at the deli to sit with me for an hour while I eat his creation.

16. Your Dealer Being Dry

Before dispensaries and doctor prescribed weed, there was that fateful text that was shot into the dark on Friday nights. Can I buy $30 bucks worth? Then waiting. It was always in those moments of waiting that your greatest fears would shoot up. What if my dealer is dry? Where can I possibly go to next? Really puts a damper on your weekend.

The biggest and worst fear. Calling your parents. While I've never had to call my parents when I was inebriated, I have had my parents call me at very inopportune moments. The fear of them asking why you sound weird is always there. You never want to disappoint your folks, so you use very short sentences that don't give away your location or state, in the hopes that they leave you alone. This fear will only go away when you smoke with your parents.

18. Of Never Owning This

Even the thought of not owning something like this when I have the means, is scary.