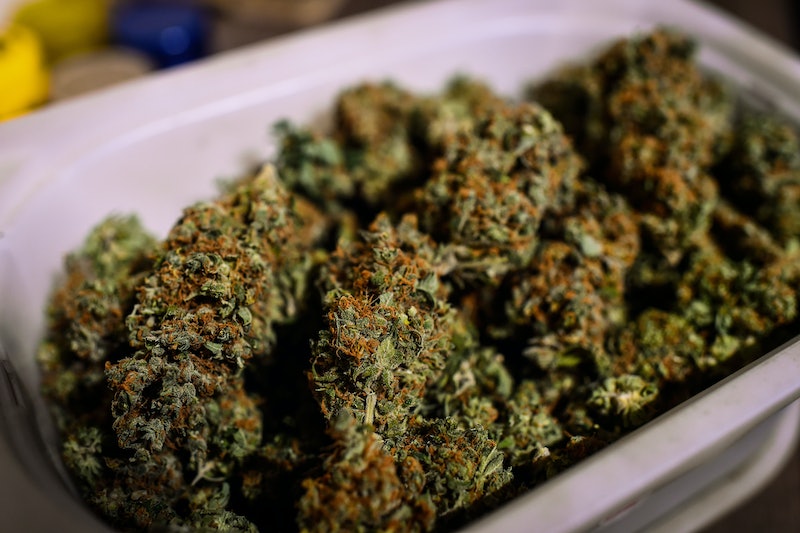 The tide seems to be turning in the national conversation about legalizing marijuana use. A Pew Research Center study of public opinion trends since 1969 showed that views on marijuana use have essentially flipped in the past three years. No longer an issue favored by a fringe minority, for the first time since the 1960s, a whopping 53 percent of the country believes that marijuana should be made legal. As one might predict, the research showed that more millennials are in favor of legalization than those in older generations, but overall the findings hold across age, gender, and political divides. But a change in opinion hasn't changed persisting myths about legalizing marijuana, and there's still plenty of misinformation about what would happen if we were to make weed legal.

For the first time, advocates for the legalization of marijuana are gaining traction as presidential candidates are adding positions on legalizing weed to their official platforms. Kentucky Sen. Rand Paul supports legalizing medical marijuana and is one of the few candidates to do so. Others in the 2016 race have sketched out positions ranging from vocal opposition to supporting each state's right to make its own decision. Even though the candidates disagree, the idea that presidential hopefuls are having serious, public discussions about marijuana use is a major turnaround and legitimizes the issue.

As the above interactive chart from Pew Research shows, public opinion on marijuana use is indeed evolving. However, myths about what will happen if more states legalize marijuana use still pervade the national discussion. Pew Research also revealed that of all the reasons people gave for not supporting legal access to cannabis, the most repeated were its potential harm to society, possibility for addiction, and potential health risks, but the trouble with each of those reasons is that they aren't exactly based in science.

In fact, when you consider the science, the traditional arguments against legalization don't make much sense. And the quicker we refute those myths, the quicker more voters can have honest conversations with policymakers about the financial rewards of legalizing weed. Here are the six biggest myths about legalizing marijuana — along with the reasons why they simply aren't true.

1) If You Legalize Weed, More Kids Will Get Addicted

Oh, the children. Concerns over access to weed leading to more pot-addicted kids have been part of the cannabis narrative since the 1960s. But a 1994 study by Experimental and Clinical Psychopharmacology on the drug's addictive properties found that marijuana isn't even as addictive as was once feared. Just 9 percent of cannabis users become dependent, the study said, compared to 14 percent of alcohol drinkers and 24 percent of smokers. In fact, if marijuana were made legal, that figure may even drop a little since some of the "addiction" markers (e.g., going through a lot of trouble to get the drug) would ease a bit.

2) Weed Is More Dangerous Than Alcohol

Not true, according to a study published earlier this year in Scientific American. A comparison of the effects of alcohol, tobacco, marijuana, cocaine, and methamphetamine use found that weed offered the lowest risk of death. And even though most users smoke marijuana without a filter, cannabis smokers are less likely get lung cancer than cigarette smokers.

3) Marijuana Is A Gateway Drug

This line of thinking will be familiar to anyone who grew up in the 1980s (otherwise known as the "Just Say No" era). The warning used to be that because cocaine, methamphetamine, and heroin users often said that marijuana was the first drug they tried, weed must be a "gateway drug" that eased young people into using other, more dangerous substances. Even Ben Carson and Martin O'Malley have expressed concerns that weed could lead to other drugs. But, research has shown the causal relationship just doesn't ring true: Weed users often avoid trying other harder drugs.

I could make plenty of jokes about how little energy or motivation stoners usually have, but it turns out that stereotype isn't really true, either. Instead, I'll point out the ACLU recently reported that a disproportionate number of marijuana-related arrests were for possession. Obviously, decriminalizing marijuana would free police departments to concentrate resources for addressing more serious offenses.

5) Marijuana Has No Use Beyond Recreation

With nearly half of states and the District of Columbia allowing some forms of marijuana use for medicinal reasons, this myth is pretty easy to refute. According to a TIME magazine analysis of the science behind medicinal marijuana use, it's difficult to assert strong evidence in either direction because the drug is classified as a controlled substance at the federal level. Still, TIME points to evidence of marijuana's benefits in alleviating chronic pain, nausea, and vomiting associated with chemotherapy, HIV/AIDS treatments, and Tourette's syndrome.

Gone are the days when only hippies or a fringe minority were pushing to legalize marijuana. Public opinion on legalization has done an about face in recent years, with more than half of the nation in favor of decriminalizing marijuana use. Not only that, but more Americans are willing to admit that they've tried weed, according to Pew Research. A decade ago, only 38 percent were willing to say they'd tried marijuana; today, that figure is up to 49 percent.

The narrative about marijuana is indeed changing in the United States, and the old scare tactics about addiction and crime simply don't ring true. Instead, voters are showing a record willingness to explore the potential benefits of decriminalizing marijuana. And because voters want to talk about legalizing weed, elected officials will have to evolve in order to keep up.

More like this
Here’s Where The NHS Nurses’ Strike Currently Stands
By Sophie McEvoy
The UK Government Is *Finally* Banning Conversion Therapy
By Sophie McEvoy
6 Anti-Police Brutality Organizations You Can Support Right Now
By Syeda Khaula Saad and JR Thorpe
Watch Jacinda Arden’s Devastatingly Honest Resignation Speech
By Sam Ramsden
Get Even More From Bustle — Sign Up For The Newsletter
From hair trends to relationship advice, our daily newsletter has everything you need to sound like a person who’s on TikTok, even if you aren’t.