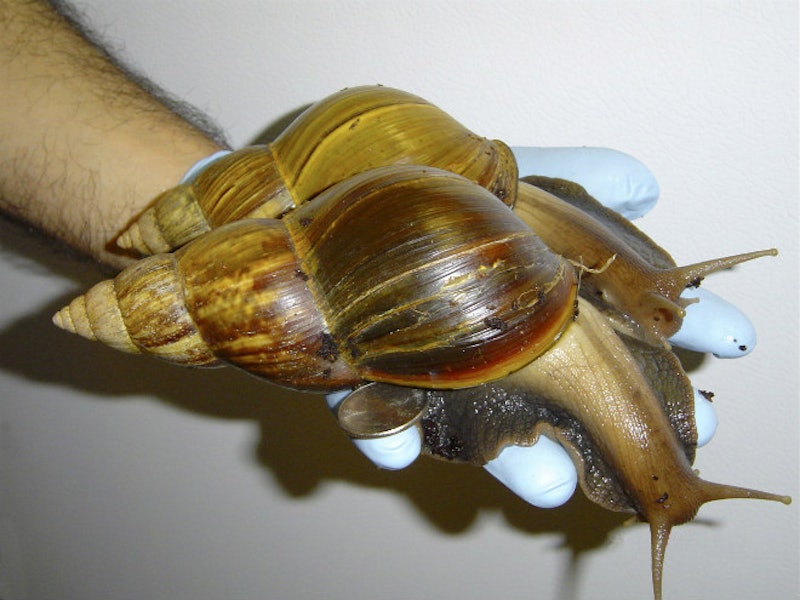 It's been a wild week in the world of sex. Here are the highlights:

I’m more than a little obsessed with the giant African land snail, which Wired calls “a hermaphroditic love machine.” These foot-long creatures have one pore with two sexy functions: either a penis extrudes from the pore, or, when the snail is acting as a female, it becomes a hole in which to receive a temporarily-male snail’s penis. There’s currently an enormous (and costly outbreak) of these snails in Florida, the penis of America, and they’re actually eating houses and more than 500 important plants. It all started when one dumb child brought an African land snail, Lissachatina fulica, back from Hawaii to his home in Florida. Eradication took seven years. And starting in 2011, for reasons not entirely understood, the humungous, sex-crazed snails are back and populating like hell.

This may not count as news, but with MSNBC recently interrupting a Congresswoman to report updates on Justin Bieber's downward spiral, I'm going to go ahead and proceed. America’s boyfriend Zac Efron opened up about his sex life, revealing that sex should happen all over the house. A favorite surface of his? “The kitchen table.” Zefron, I am so, so on board.

3. The Deal with Female Viagra

Ever since the pharmaceutical success story that is Viagra, drug scientists have been furiously attempting to formulate a libido-boosting counterpart for women, The Huffington Post reports. It's looking like there's now reason for hope, as scientists have begun focusing on hormones (instead of blood flow, as Viagra does) and suspect that testosterone could boost female desire and pleasure. Don’t get too excited, though — some of the more promising solutions, including a nasal testosterone spray and gel applied to the arm, are wildly unappealing. And the verdict is still out on long-term effects of any hormonal sex supplements.

The National Survey of Sexual Attitudes and Lifestyles asked 15,000 British adults about their sex lives. One of the questions — “have you had any sex in the past four weeks?” — produced some interesting results. The data shows that in the past four weeks, millions more blokes have had sex than women have. There are many possible explanations for this, including that men and women could very easily (and often do) lie about the amount of sex they’re having, with women underplaying their number and men grossly exaggerating. Overall, though, the study concludes that 20 percent of the population hasn’t had sex in the past month.

Fast Company reports that only one percent of entrepreneurs have found that their sex lives have improved since starting their own businesses, according to a study conducted by Manta in 2013. At the start of January, relationship psychologist Esther Perel met with 60 entrepreneurs in DC to discuss the role of sex in their lives, ultimately finding that starting a business can take a terrible toll on your sex life, as it exhausts you emotionally and creatively. “Home becomes the place of stability and safety,” Perel says. “And work becomes the place of passion.”

6. The Most Popular Time for Having Sex

According to a new survey, 7:37 p.m. on Saturday is the most popular time to have sex. The study, published on www.lovehoney.com, found that the times we are most often aroused do not necessarily correlate with the times we have sex. For some reason, 4:33 p.m. is the most common time for people to be aroused, yet sex follows about three hours later. Ultimately, the survey shows that most couples must schedule sex in order for it to happen. The survey also found that we desire sex the most in the summer; I read this unsurprised, wrapped up in my camouflage snuggy, combing my leg hair and drinking hot chocolate.