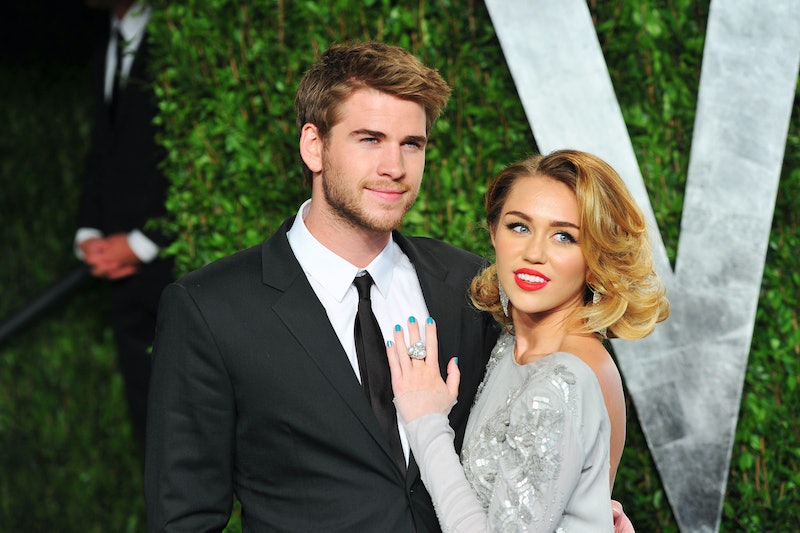 I have always held a little candle for Miley Cyrus and Liam Hemsworth. They had a super adorable Hollywood love story of meeting on a film set, falling head over heels, and quickly becoming engaged, but the couple ended their engagement in September 2013, and hearts broke along with them, and it seems like neither of them found long-lasting love after that. Fans got a treat when reports came out that Cyrus and Hemsworth spent this past New Year's together in Australia and with all of the recent very telling evidence, I can't help but wonder: Are Cyrus and Hemsworth engaged again?

Bustle has reached out to Cyrus and Hemsworth's reps for comment, but has not yet heard back.

Over the past few months, the singer and actor have both seemed to stay mostly single with some rumors of small flings mixed in between. They have publicly declared their love for each other (at least friend love), leading many fans to profess these two as their forever OTP. In her October 2015 Elle UK cover story, Cyrus even said of her relationship with Hemsworth, "Then you break up and it’s everywhere. And it’s like, 'They’ve moved on,' but actually often it’s all good. Me and Liam are still so close and we love each other, and they make it like there is negativity."

And since that New Year's sighting, it seems like things have really been heating up between them again — and fast. On Jan. 17, Cyrus was spotted wearing a gold diamond ring on her engagement finger, which looks suspiciously like the ring Hemsworth gave her years ago.

Aside from the piece of jewelry on that finger, TMZ caught Cyrus driving a U-Haul to Hemsworth's place in Malibu with a ton of stuff and all signs pointing to her moving back in.

According to some "Miley sources" who spoke with TMZ, this past weekend marked the end of her week-long moving process and being that she is, apparently, rocking an engagement ring, I think it's safe to say something very serious is going on with Cyrus and Hemsworth's relationship. Personally, I am super happy at the prospect of them getting back together for good so I can finally believe in real, young love again.

More like this
Khloé Kardashian Is Reportedly Dating A Private Equity Investor She Met Through Kim
By Jordyn Tilchen and Jake Viswanath
Dixie D’Amelio & Noah Beck “Love Each Other” Despite Breakup Rumors
By Julia Emmanuele, Jordyn Tilchen and Grace Wehniainen
Hailey Bieber Reacts To Rumors She "Stole" Justin & *That* Selena Gomez Chant
By Radhika Menon
Adam Devine Hilariously Let Everyone Know He’s *Not* Accused Cheater Adam Levine
By Brad Witter
Get Even More From Bustle — Sign Up For The Newsletter