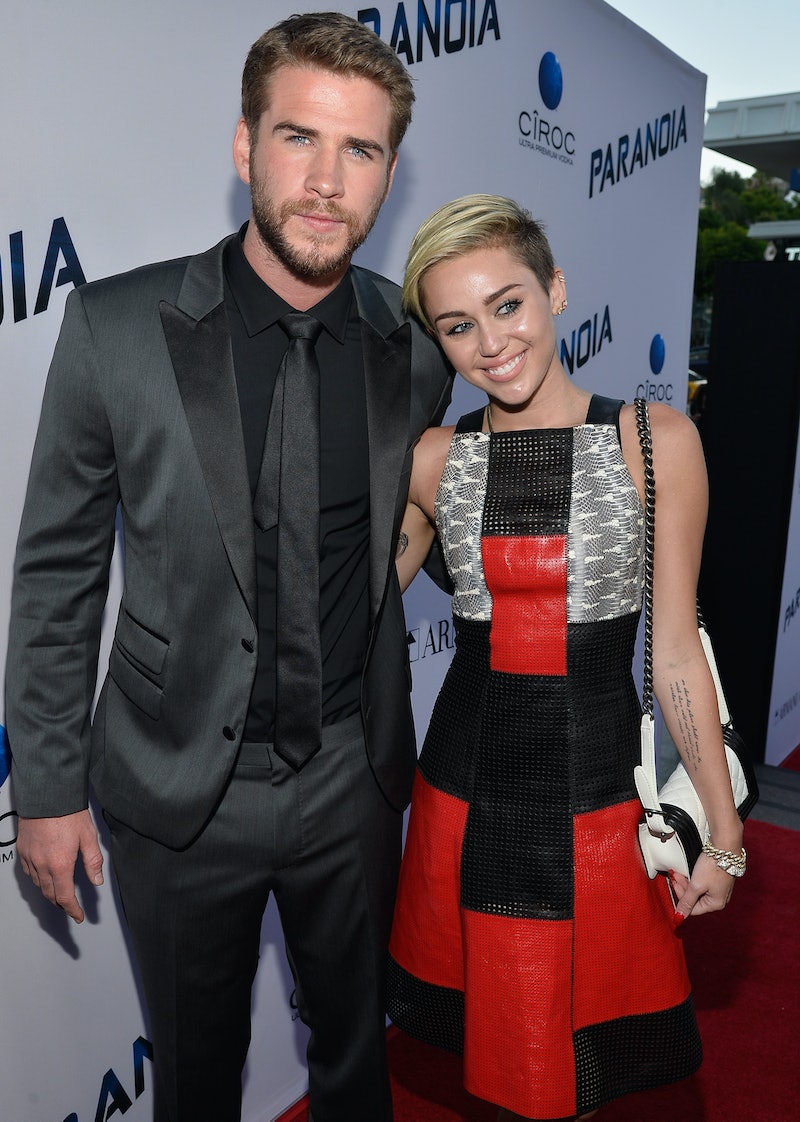 If you never stopped shipping Miley Cyrus and Liam Hemsworth, then prepare ye for this potentially exciting AF news: Cyrus was photographed wearing her engagement ring — or at least a ring that looks insanely similar to her engagement ring. According to Just Jared, the 23-year-old was photographed wearing the diamond rock while arriving at New York's JFK Airport on Sunday, Jan. 17, and it didn't take long for the comparisons to start rolling in. The ring Cyrus was sporting looks pretty identical to her engagement bling from Hemsworth. This fact just adds to the mounting evidence that despite the fact that Hemsworth and Cyrus called off their engagement in 2013, they may be well on their way to getting back together.

Take into consideration the fact that Cyrus and Hemsworth allegedly spent New Year's together in Australia, his home country. According to the Daily Telegraph, the two were "cuddling and kissing" at the Byron Bay Falls Music Festival. On the trip, Cyrus also hung with Hemsworth's sister-in-law, Elsa Pataky — a pretty telling sign that she was still tight with her ex-fiancé's family. Of course, there's no disputing that Cyrus and Hemsworth are still close — lest we forget that she also helped her ex adopt a dog recently. But are they really getting back together? And what does Cyrus' ring mean?

Though I can't say for sure that the rock the "We Can't Stop" singer was donning is exactly the same as her engagement ring from Hemsworth, the (blurry) closeup of the bling does draw a lot of similarities to the custom-made Neil Lane engagement ring. There's the fact that she's wearing it on the ring finger of her left hand (you know, where the engagement ring typically goes), as well as the fact that the diamond appears to be the same size (3.5 carats) and shape (cushion cut), and both rings sport the same type of gold band and gold setting for the rock. Hmmm.

To be fair, it's only natural that rumors are going to fly after these photos emerged. The mill would be churning even if the couple hadn't remained friendly after their split, but the fact that they have — and recently rang in 2016 together "canoodling" it up — only makes the case for their reconciliation (and the idea that Cyrus is sporting her engagement ring) stronger. While the argument could be made that girlfriend just likes to rock the bling — and maybe she's just wearing that long-lost piece of jewelry that she once said she thought she left in the shower — it seems just a little too coincidental here. And though I won't go as far as to flaunt this as irrefutable proof that Cyrus and Hemsworth are getting back together, I'd say that the seeds are definitely planted — and this engagement ring is the sprinkler that is makin.' it. rain.