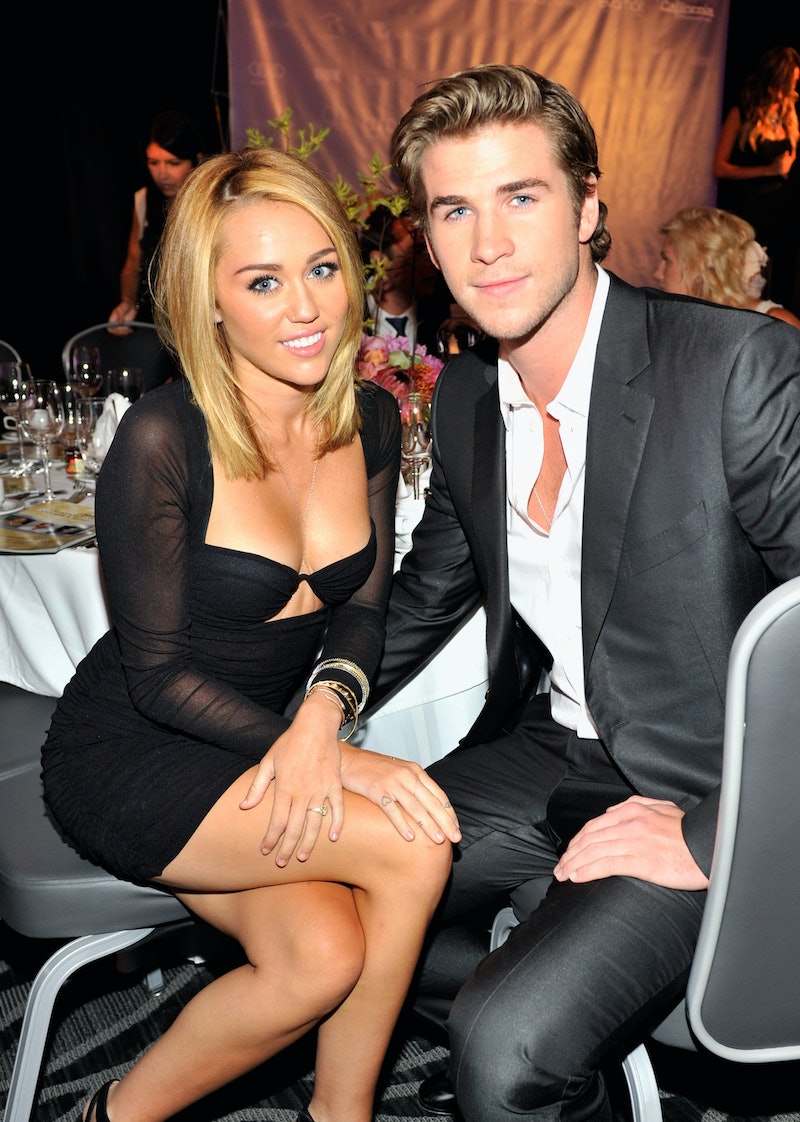 It's been more than two years since Miley Cyrus and Liam Hemsworth officially called it quits, but now, their breakup might be just a bump in the road for these two. In case you haven't heard the good news, the former couple was spotted hanging out in Australia over the New Year's holiday, and it looks like it's possible that these two crazy kids could be getting back together. If you ask me? I'm not surprised. In fact, I've been partially convinced this whole time that eventually, they'd find their way back to each other. They were literally perfect together, guys. Their relationship was beautiful. They were beautiful. Their future children would have been beautiful!

And now, it looks like Cyrus and Hemsworth are getting a second chance — and at the very least, they're chummier than they were before, so either way, people are clinging to the past and still shipping Miam (like me, duh) can take comfort in knowing that the chances of them walking down the aisle someday are at least a little bit bigger than they were before.

But they obviously ended their engagement for a reason, right? What has changed that would make their relationship work this time around? There are plenty of reasons that Cyrus and Hemsworth should get back together, especially now that they've had a break from each other.

Throughout their breakup, they've both maintained that they still have a good relationship. In fact, Hemsworth has even admitted that he doesn't think his feelings for her "will ever change." That means there's definitely still something there to work with. Besides, if Hemsworth still feels that strongly about her, maybe they need to spend more time together to explore that.

2. They've Had Time To Grow

After more than two years apart, they've both had time to live separate lives and be on their own. For Hemsworth, that meant starring in The Hunger Games, and I thank him for that. For Cyrus, it meant making somewhat confusing art but also really good music. And in their time apart, they've also had the opportunity to mature and grow as people, so maybe the adult versions of themselves actually make a perfect partner for each other.

3. Cyrus Was Able To Answer Her Biggest Doubt About Their Relationship

Shortly after their breakup, Cyrus said that she had always been afraid of being alone, and that in her relationship with Hemsworth, she was scared of the feeling of "not knowing what to do with myself ... if I didn't have him." If that thought was always in the back of her mind, no wonder their relationship didn't last. But now that she knows she can stand on her own and be fine without Hemsworth, maybe that will make their relationship that much stronger in round two.

4. They Used To Be So Cute Together

5. They Both Love Animals

In fact, Cyrus even helped Hemsworth rescue a dog recently. What if they got back together and shared that adorable pup? Not such a bad bargaining chip!

6. They're Just So Beautiful

I mean, look at them. I rest my case.

7. And We Need A Last Song Sequel

Not that this one is ever going to happen, but it's definitely not happening as long as Cyrus and Hemsworth remain split up. What? I can't be the only one who loves cheesy movies like this one.

There's only one thing left to do, Hemsworth: Give her back that ridiculously gorgeous engagement ring. Maybe someday?!

More like this
Dixie D’Amelio & Noah Beck “Love Each Other” Despite Breakup Rumors
By Julia Emmanuele, Jordyn Tilchen and Grace Wehniainen
'MAFS UK' Changed The Rules After Matt & Whitney Cheated On Their Partners
By Catharina Cheung
Kim Kardashian Reveals Her Response To Kanye’s Fashion Opinions
By Jake Viswanath
Stanley Tucci & Felicity Blunt’s Relationship Timeline Might Make You A Little Hungry
By Jake Viswanath
Get Even More From Bustle — Sign Up For The Newsletter