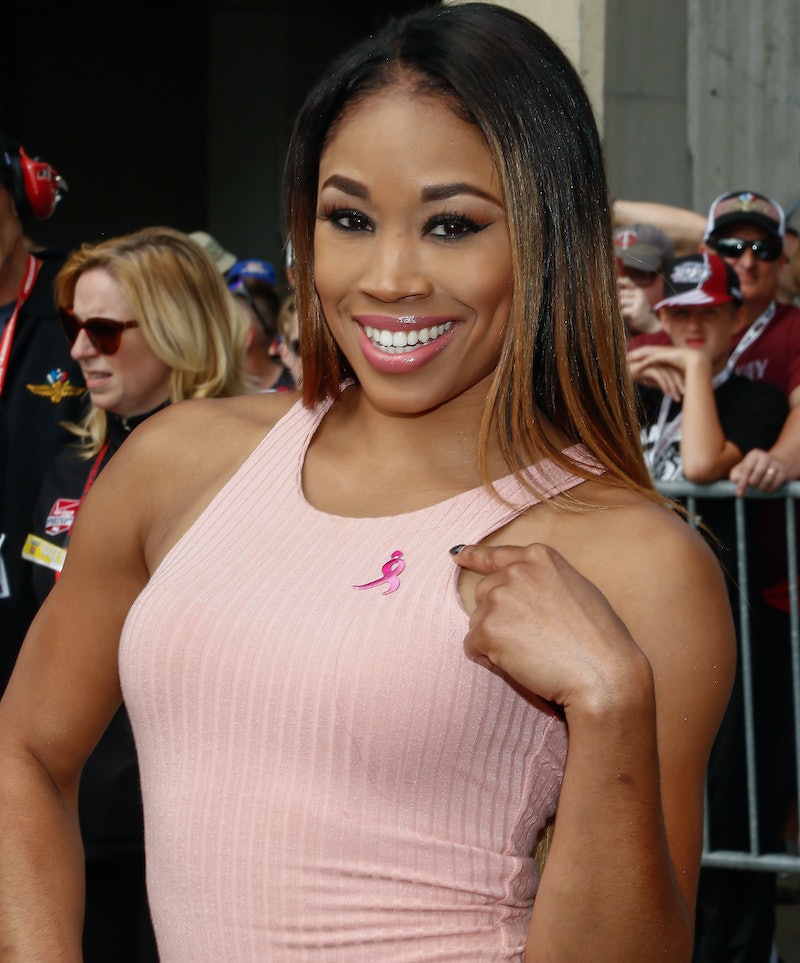 When Season 5 of the E! reality series Total Divas premieres on Tuesday, Jan. 19 at 9 p.m. ET, one of the OGs of the show will probably not be there. Ariane Andrew, better known by her ring name Cameron, hasn't really appeared as a full-time cast member of the show since Season 3, but after making a few appearances in Season 4, it sounds like she won't be in the upcoming season of the show. Hopefully, Cameron is up to something a lot better now to help explain that absence.

However, Cameron's departure from the show shouldn't be all that surprising. After the premiere of Season 4, Cameron posted a lengthy message on Twitter explaining to fans why they wouldn't see her on the show very much. "You may not see me as much this season but you should take solace in the fact that the WWE team and I are working hard on improving the Cameron character as well as me expanding the Ariane brand," she tweeted in July 2015. "I thank you all for the continued support and promise that I am working my tail off to bring you bigger and better things soon!"

So has Cameron made good on that promise during the past six months since Season 4 of Total Divas premiered? Read on to find out the status of Cameron the character and Ariane the real person.

She Took Some Time Off From The WWE

Cameron took a break from the WWE in recent months, she revealed during an interview with the Edmonton Sun published earlier this month. However, she's back training part-time at the WWE Performance Center in Orlando, Fla. and has been in some NXT (the developmental arm of the WWE) live shows. "The Cameron you remember is not the Cameron you will soon see," she wrote in the description for a video on Instagram showing her training with pro wrestler and friend Carlo "Cash Money" Cannon. I can't wait to see what this new Cameron is all about.

But Her Workout Routine Has Not Let Up

When your career depends on what your body can do and what it looks like, you've got to continuously keep it in shape. That's exactly what Cameron has done. Depending on what coast she's in (Cameron splits her time between Orlando and Los Angeles currently), her workout routine can consist of an hour of cardio in the morning and an hour of weight lifting later in the day, a three-hour practice in the ring, and/or a 55-minute circuit-style class, she told the Edmonton Sun. Oh, and she also trains five times a week. That's, like, more exercise than I ever even want to think about.

Say what you want about the legitimacy of pro wrestling, but the athletes do sustain real injuries, and Cameron is no exception. She had to get stitches a few months ago, and it looks like she didn't take getting sewn up like a diva, but rather, like a champ.

She Released An Inspirational Single

Cameron released a new single called "Wrong Number" as Ariane with a singer named Lovely in September 2015. Though the thought of another reality TV star releasing a song might make you want to either laugh or sigh uncontrollably, there's actually a good reason to check out "Wrong Number." The song was created to complement her anti-cyberbullying campaign. “I speak with my fans a lot, and they’re the ones who inspire me. They’ve shared their stories with me, and it made me think, ‘You know what? Let me do something to raise awareness about this, but do it in a fun way through music,’” Cameron said in an interview with WWE.com published in September. “The song is my sassy way of saying, ‘Hey, for every hater, there is a believer. And if you’re not about positivity, you have the wrong number.’ That’s the message.” If listening to "Wrong Number" is wrong, I don't want to be right.

Cameron's boyfriend Vincent Isayan appeared on Total Divas every now and again to support his Diva, and it looks like the macho man is still in her life these days. The two rang in the new year together, and Isayan also posted a sweet message about Cameron on Instagram recently. "She busts her ass to be the best she can be. Some people will never see the reality," he wrote. That almost makes me overlook the fact that he took a photo of Cameron while she was sleeping. Almost.

She's Obsessed With Her Furry Friend

Aside from her boyfriend, the other love in Cameron's life is her little pup Glitter, or Glitty for short, who even has her own Instagram account, but of course. Cameron never seems to miss an opportunity to post a pic of her pooch all dressed up or just cuddling up with her owner, and I can't say I blame her.

In fact, is it wrong that I kind of want Cameron to return to Total Divas just so I can have more Glitty in my life?