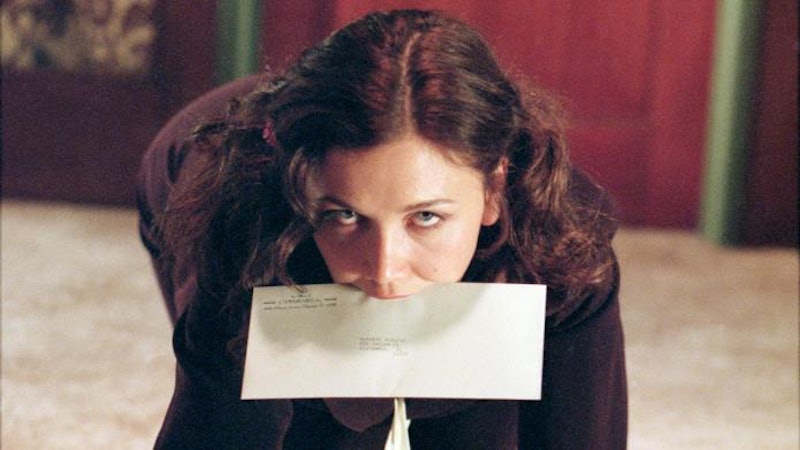 Some of sexiest movies from the early 2000s are no longer considered "dirty;" they're now just a step above sexy. And best of all, you don't have to travel behind some black curtain: you can stream them online.

Before he was Mozart in the Jungle, Gael García Bernal was just a teenage boy taking a road trip with his friend. Of course, that road trip would become his sexual awakening with a mysterious older woman and his bestie, played by Diego Luna. That scene in the hotel may be short — 30 seconds or so — but it won't be forgotten by those who see it.

This David Lynch thriller will have you on the edge of your seat, which isn't much of a surprise — there's plenty of strange and occasionally horrifying imagery to go around. But Mulholland Drive also gives us one of the most beautifully shot lesbian love scenes ever put to film. Yes, from the guy who did Twin Peaks.

Rent it on iTunes

Stream it on HBO

Scarlett Johansson and Jonathan Rhys Meyers have so much passion in this movie that they're ruining apartments because of it. There's something so wrong about what they're doing to their respective partners, but it's hard to look away when they're getting steamy in the rain and ripping each other's clothes to shreds. What can I say, moral compass be damned.

Stream it on HBO

Some may remember this Keira Knightley film as being a stodgy British Oscar nominee about what can happen when someone tells a lie. But that scene in the library between Knightley and James McAvoy will get your heart pounding as loudly as that ticking clock that seems to keep time with their hushed moans and heavy breathing.

Stream it on Hulu

This Jake Gyllenhaal and Anne Hathaway movie is a tearjerker about what it really means to love someone in sickness when you're in good health. But it starts off as a sexy romp that shows these two getting it on pretty much everywhere. That's the part you should watch... and then maybe turn it off before anything sad happens.

This movie is definitely not for the faint of heart, as it covers the final moments of a marriage, flashing back and forth between the present and the past, when a couple — played by Michelle Williams and Ryan Gosling — were young, beautiful and in love. But in that scene in which Gosling pleasures Williams in the shower (the one that got the movie an NC-17 rating) you can't help but feel aroused and possibly a little sad about his last-ditch attempt at intimacy.

This beautifully filmed drama by Todd Haynes focuses on the relationship between Carol Aird (Cate Blanchett) and Therese Belivet (Rooney Mara). Set in the '50s, no one was very keen on the idea of two women having an affair, which this film deals with without being heavy-handed. Haynes also gives the world one of the sweetest and sexiest love scenes between two women. It's not played to be risque, but tasteful — showing two women in the heat of passion, enjoying each other's bodies, which is hard not to enjoy when watching.

This article was originally published on Jan. 29, 2016