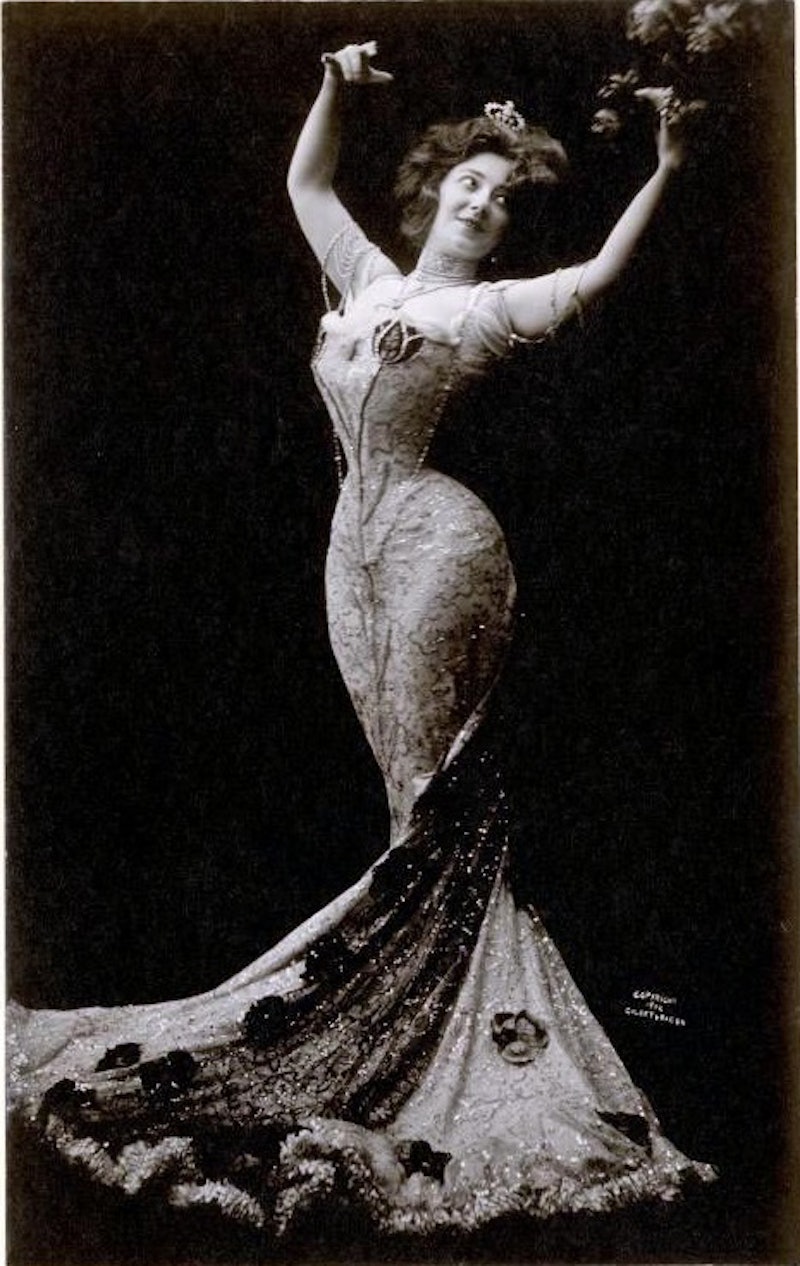 When thinking about the evolution of corsets, my mind immediately pictures three famous people who have flaunted them in recent years. There's burlesque queen Dita Von Teese, Nicole Kidman in Moulin Rouge, and Keira Knightley circa Pirates Of The Caribbean. In the portrayal of their characters or stage personas, all three seem to wear corsets for different reasons.

In the first installment of the Pirates Of The Caribbean series, these babies were the fashion. Sure, Elizabeth Swann's corset was so tight it made her faint. But at least she looked chic, right? In the early 1900s, modern bras were introduced to the mass market, but Moulin Rouge was set just prior to this, so corsets would have still been the preferred underwear choice. Ms. Kidman played a courtesan, who used her corset and foxy costumes to seduce admirers. As for Dita Von Teese, she wears corsets frequently. Perhaps this is because, traditionally, burlesque performers wear lingerie during their performances. Like most modern performers of the dance form, Von Teese carries on the costume-like tradition of wearing a corset during her shows.

Somewhere down the line, corsets transformed from a trend to a garment with the potential to express one's sexuality. Here's a look at the history of this colorful item.

Apparently 16th Century corsets were quite different to modern day ones. According to Drea Leed of the Elizabethan Costume website, during the 16th Century "the corset was not meant to draw in the waist and create an hourglass figure; rather, it was designed to mold the torso into a cylindrical shape, and to flatten and raise the bust line."

This is a very different shape to the hourglass curves that modern corsets still create. Leed, who has studied historic costume and presented papers at the International Congress Of Medieval Studies and other conferences, further noted that "the corset worn in Elizabethan England, when fitted and laced correctly, is quite comfortable."

According to the University Of Virginia's Historical Collections, men wearing corsets wasn't uncommon during this era. "Some men wore corsets in the 18th and 19th centuries. Especially in the late 1700s and early 1800s, high fashion for men called for form-fitting trousers and jackets. Some men wore corsets to create the required smooth silhouette. By the mid-1800s, however, the few men who wore fashion corsets were more commonly subjects of ridicule." After the love affair between men and corsets dwindled out, it would seem that women reclaimed the item once again.

Lucy Johnstone of the Victoria And Albert Museum's Department Of Furniture, Textiles, And Fashion is also familiar with corsets in the Victorian era. According to Johnstone, "The corsets of the 1840s were cut from separate pieces stitched together to give roundness to the bust and shaping over the hips. A broad busk (a flat length of wood or steel) was inserted up the center front of the corset to give a smooth line to the bodice of the dress. Strips of whalebone were also inserted up the back and sometimes down the side and front, to give more structure. Corsets also had to be rigid to conceal the layers of underwear, including chemise, drawers, and petticoat, which were worn underneath."

The Vintage Fashion Guild further notes that tight-lacing was most fashionable from around 1870 to 1890. "These 30 years mark when the small waisted hourglass figure and tight lacing was at its most extreme. Bodices became so fitted, almost to the point of being skintight that a perfectly fitting hourglass shaped corsets was needed to create the changing fashionable silhouette." The Society For Rational Dress helped educate people regarding the health risks associated with Victorian corsets, such as the rearranging of internal organs.

The Vintage Fashion Guild discussed the introduction of supposedly healthy corsets, though. In the late 1870s and 1880s, "elastic panels were often used in corsets to alleviate some of the rigidity of a completely boned corset. Some corsets even had 'ventilation' in them in the form of eyelet holes dotted throughout the corset or by making a corset out of cotton netting for summer use." The concept of a healthy corset might seem a little difficult to wrap your head around. But, hey. At least they tried.

Even after all of the health warnings about tight-lacing, corsets didn't dwindle in popularity straight away. In fact, a new style was invented. In the early 1900s, the S-curve or S-line figure came into popularity. According to the MET Museum, "The S-curve form imposed on women’s bodies in 1900 was the result of a straight-fronted corset that started lower on the bustline than the corsets had a few years previously. The shape of the corset allowed the bosom to hang low and unarticulated in front while the hips were pushed backwards."

I initially assumed that the S-curve was imposed upon women by men, but I was wrong. In an article for Jezebel, Lisa Hix discussed myths and truths surrounding corsets with the director and chief curator of The Museum At The Fashion Institute Of Technology, Valerie Steele. Ms. Hix reported that, "Men, in fact, regularly protested corsets, claiming they caused hysteria and the other health problems." She later added, "Men might not have oppressed women by demanding they wear corsets, but women certainly wore them to impress men and assert their rank among other women."

The S-curve silhouette didn't last long, though. The health implications caused by the unnatural shaping of the body, the rise in popularity of the brassiere, the changing fashions, and the demand for steel during World War I meant that many women were dissuaded from buying corsets.

Although restrictive corsets dwindled in popularity, the corset did not disappear entirely. It actually made a reappearance in the form of a girdle. The girdle was a lighter alternative that usually spanned from the waist to the hips and was typically worn in conjunction with a bra. In an article discussing women's shapewear before Spanx, The Daily Mail reported, "Constructed of elastic fabric and sometimes fastened with hook and eye closures, girdles were also considered essential garments by many women from about 1920 to the late 1960s to create a rigid, controlled figure."

According to The Vintage Fashion Guild, shortly after WWII was declared in 1939, austerity measures were put into place. "Luxury fabrics were hard to obtain or prohibited, and the era of Make Do and Mend began. Zippers were prohibited for use in corsetry and steel hook and eye closures were limited." Metal was also utilized less in corsetry because "metal was clearly to be used in the war effort — not in your corset or girdle."

In 1947, Christian Dior released his "New Look," which took the fashion world by storm as he changed the commonly sought-after "shape" of women's bodies. According to Vogue, Dior's "New Look" "consisted of a calf-length, full skirt, a cinched waist, and fuller bust than had been seen since the turn of the century." Here we saw a return to the nipping-in of the waist through corsetry underneath pretty skirts.

1970s-Now: An Expression Of Sexuality

According to Vollers Corsets and their history of burlesque, "Sadly by the 1960s the burlesque industry was facing increased levels of censorship and interest levels dwindled. It wasn’t until the 1990s that women all over the world began to revive the vintage style of stripping." Perhaps the demise of the burlesque industry had something to do with the decline of corsets for a couple of decades.

In the early aughts, Moulin Rouge was released along with the new version of "Lady Marmalade," sung by Christina Aguilera, Lil' Kim, Mya, and Pink. In the song's music video and in various performances of their rendition, the women wore lingerie and corsets. Obviously they made a nod to the film, but they also used their corsets as empowering symbols of their sexuality.

Although many of us don't wear corsets, I think it's encouraging to know that they've been reclaimed by many women who feel empowered and proud of their sexuality. You might find a corset super restrictive, and feel more confident in an unlined bra, no bra, or boxer style shorts. The point is, there arguably isn't as much pressure for women to wear certain types of underwear in order to fit in with society's beauty ideals. And that's a great thing.

More like this
Most Comfortable Underwear For Big Butts
By Audrey Williams
Are Skater Shoes the Next Y2K Trend to be Revived by Gen Z?
By Lauren Alexis Fisher
The 11 Best Front Closure Bras For Big Boobs
By Maria Cassano
The 5 Best Underwear For Preventing Wedgies
By Lisa Fogarty
Get Even More From Bustle — Sign Up For The Newsletter