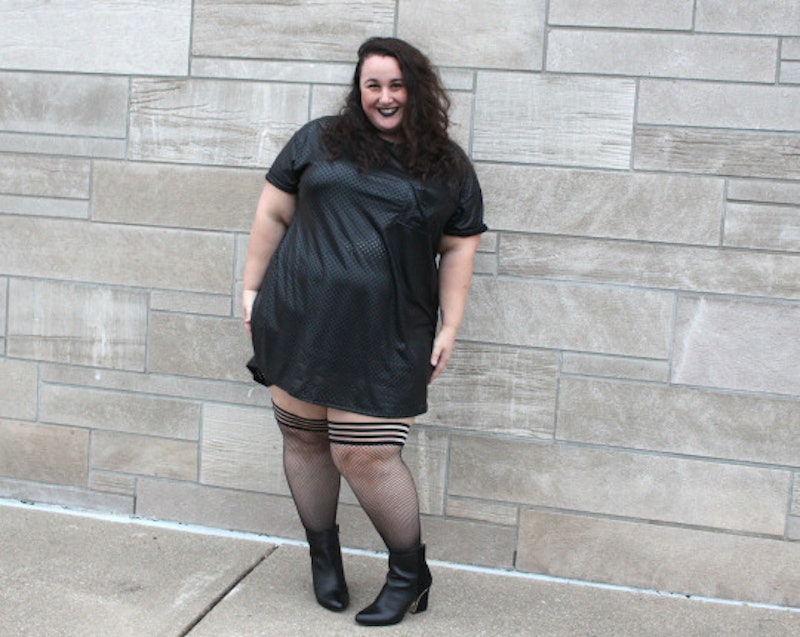 Body positivity is far from a new concept, but 2015 was arguably the year that body positive trends came to the mainstream. And now that the conversation has started, I am predicting that 2016 will be the year that body positivity stops being "news" in and of itself, and instead we start celebrating the individuality of body positive fashion. Mainly, I hope that people will finally stop policing what others want to wear and start celebrating personal freedom and autonomy through style at all sizes.

There have been a lot of body pos trends getting traction in the media, with movements and campaigns such as #IWontCompromise or #DontHateTheShake that challenge the idea that plus size women can't do yoga or show plus size bodies dancing and shaking, respectively. But the fashion lover in me can't help but notice that 2016 is poised for some big advances in body positive style, too.

In 2015, the plus size community fought back against brands that claimed body positivity without an in-depth understanding of the concept. This was seen in the #AskLaneBryant Twitter chat, where a lot of the questions posed focused on giving the plus size community more options and better representation. Notably, blogger Gabi Gregg of GabiFresh posed the question to her followers, "What would make you actually spend more money at Lane Bryant?" and the answers showed that more options and models sizes 22 and above are what the community wants.

The poll from Gregg stuck with me, and not just because I am also a plus size designer who happens to be size 22+, but because it represented the fact that plus size consumers are moving past simply being grateful that brands are offering anything in plus sizes. Folks are standing up and saying that they won't just blindly accept whatever brands decide to give them, both in terms of the clothing produced and the advertisements used to sell the products.

As for clothing options, consumers want parity with their straight size counterparts. And if a campaign is touting body positivity, all of the bodies shown best not look exactly the same. I have faith that, in 2016, retailers will finally give in to the continuous push for more plus size options.

We're only a month in, and already I'm seeing new body positive fashion trends in 2016. Gregg released her fourth annual line for swimsuitsforall this month, and what struck me most was that there were a good amount of one-piece swimsuits in the collection alongside her signature fatkinis. Gregg was one of the people who really popularized fatkinis, so to see her design one-pieces as well shows me that we are moving past the idea that a fat body in a two-piece is revolutionary and — much like our straight size counterparts — we that just want cute options. We're definitely over the notion that fat bodies only want to wear white tees and swim skirts at the beach, but now we are celebrating more options for plus size swimwear beyond bikinis, too.

For a long time, there's been a set of unspoken (and sometimes spoken) rules regarding what plus size women can wear. Oprah Magazine made major waves in summer 2015 for publishing an unfortunate article that claimed that you can only wear a crop top if you have a flat stomach. The plus size community rallied together, posting images proving how wrong that statement of body policing was. Growing up, advice like this from mainstream magazines was common, and I never remember seeing anyone question it. I'm so grateful that this no longer the case, and that publications are now called out for reinforcing fat shaming and bogus beauty standards.

Fat girl fashion rules are made to be broken. There are plenty of bloggers and plus size celebrities who proudly proved as much in 2015, but it came with both support and backlash. This year, we're likely to see less body policing both from those outside and within the plus size community. If you want to wear a bodycon, cool. If you want to wear an oversized tee, that's also cool.

Let's stop telling the size 26 woman that she has to wear shapewear. Let's stop only celebrating hourglass bodies in plus size fashion. Let's make more opportunities to applaud those who dress for no one but themselves. Let's give them a strong platform of support rather than tearing them down, or telling them what to wear in order to be accepted. Let's tell them instead what they can wear — that's what I want to see become the most body pos trend in 2016. Dressing for yourself, and continuing to demand equality, options, and visibility.