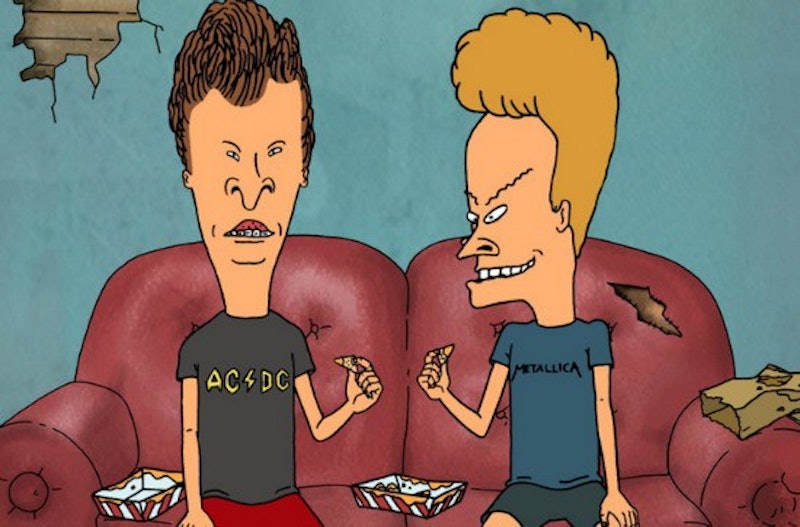 Tucked in between the pleasant memories I have of sitting in front of the television as a child, getting in my good fill of ‘90s sitcoms and cartoons, there are the darker ones. The memories of enforced bed times, of my mother turning off the TV and telling me it was time to do my homework, and of the constant battle over all of those amazing ‘90s shows that my parents wouldn’t let me watch. You remember the ones: The shows that were either on too late or dealt with topics your parents weren’t comfortable with you watching. And no matter how much you begged them to let you watch — “You can even watch with me!” was my usual ploy — they wouldn’t budge.

Thank god for growing up. I mean, I might have to pay rent now, but I can also watch as much trashy television as my time (and my job) will allow. There’s no hand reaching down à la Muppet Babies to turn off the TV when I watch too many episodes of The Bachelor too late at night. These days it’s just me and the remote control, and we can watch whatever we want to.

But back then? These 11 shows became a constant battle, one that you fought valiantly, trying to convince your parents to let you watch them in the first place.

Not only was this show on way too late, there was way too much sex going on for any parent in their right mind to be OK with their kids watching it. And considering how they depicted love and relationships, can really blame your parents for not letting you?

Sneaking over to your friend’s house to watch recorded episodes of The Real World became the norm in your life, because there was no way your parents were letting you watch a show that so blatantly showed people drinking, making bad choices, and fighting without any real sense of conflict resolution.

The stuff of sleepover dreams. You may not have gotten half of the jokes that these two cartoon bozos cracked, but you definitely had to be in someone else’s house in order to watch it.

No matter how much you begged, your mother refused to let you watch this one, at the risk of having nightmares, she always said. In her defense, this was probably the right call. This show is absolutely terrifying.

This show was so far past your bedtime, you didn’t even know those hours of the day existed. Which is a shame, because your comedic timing could have really benefited from these early lessons from the greats.

Your liberal-leaning mother would have probably let you play with Barbies before letting you watch Baywatch. And that’s saying a lot.

Five kids in a house all by themselves with no parents around? This may as well have been another Real World, as far as your parents were concerned.

Your parents probably didn’t want you watching this short-lived show because it dealt with topics like sex, drugs, and rock and roll. But that didn’t stop you from tuning in when reruns started airing on MTV after school. Sorry, mom and dad!

The minute this show came on, my mother would send me to bed, declaring a need for “me time” and “a glass of wine.” Go figure.

I still don’t totally get why parents were so anti-Ren and anti-Stimpy, but they always seemed to be. Probably because they “swore” on occasion, which, like, get over it, mom and dad. It’s not a big deal.

11. Are You Afraid Of The Dark

OK, yes. This one was made for kids. But your mom, like mine, probably had to deal with one night of your post-show nightmares before putting her foot down and saying no more.

So take this opportunity to check out old episodes of the shows your parents wouldn’t let you watch in the ‘90s. You’re an adult now. You can do whatever the hell you want with your Monday nights. That’s actually one of the few things about being an adult that rocks.

More like this
22 Movies On Netflix That Are Perfect For The Whole Family
By Bustle Editors
Here’s How You Can Watch Season 3 Of 'Never Have I Ever' In The UK
By Frances Stewart
Josh Peck Shows Love To Jennette McCurdy After Her Shocking 'iCarly' Revelations
By Radhika Menon
At 14, D'Arcy Carden Was Sneaking Out To Parties & Crying Over Kurt Cobain
By Ivana Rihter
Get Even More From Bustle — Sign Up For The Newsletter