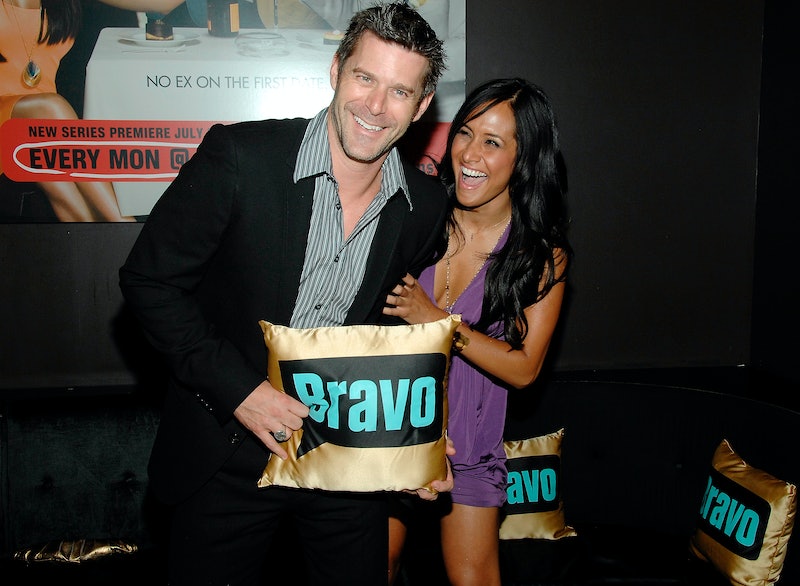 For many of the Real Housewives, before there was happily wedded bliss (or at least happily coupled bliss) there were a few relationships that came and went as quickly as the new seasons of the show. How could any of us forget the men that played such a huge role in these women’s lives? But forget we did (probably because we had more important things to think about, like when the reunion was going to air and who was fighting this time). Sadly, these are the relationships that most of us forgot about on Real Housewives.

Most of them, of course, were doomed from the start. Either rife with drama or a lackluster start, audiences everywhere knew that these guys were goners as soon as they stepped onto reality TV. But some of these relationships had real potential. And watching these men get kicked to the curb (or leave for even sadder reasons) was sometimes hard to watch. But relationship drama — whether it’s with friends or with lovers — is what this show is all about.

So let’s take a walk down memory lane and revisit all of these relationships of Housewives past that you most likely forgot about by the time the new season rolled around. Because some of them defined entire dynamics between the women, and a few of them even ended in tragedy.

Before there was Gretchen and Slade, there was Jo and Slade. The first season of RHOC started off with these two living a very different life than Slade would come to know in future seasons of the show. Back then, he had enough money for Jo to stay home and not work, and viewers followed her around as she basically talked to the cameras and complained about being bored with her life.

It was brief, but it’s been reported that after Slade broke up with Jo and before he got together with Gretchen, Slade dated former Real Housewife Lauri Peterson. Oy vey.

4. Luann DeLesseps And The Count

Before there were French men on girls’ trips, Luann was happily married to the father of her children, Count Alexandre DeLesseps. She may have decided to end things with her husband — but, thankfully, she got to keep her Countess title.

5. Carole Radziwill And That One Rockstar

Long before she was dating the chef (aka, Luann’s niece’s ex-boyfriend), Radziwill was in a long-distance relationship with Russ Irwin, a member of Aerosmith. Audiences barely ever saw him on the show, but it was apparently a thing nevertheless.

6. Greg And Nene Leakes — The First Time Around

Before they were adorable and affectionate Greg and Nene, Greg and Nene were on the brink of divorce and at each other’s throats. Remember that? Ahhh, the good old days! Still, it’s kind of incredible to watch early seasons of RHOA, see Greg being all shady, and wonder what really changed between the two of them.

Long before Todd Tucker was in the picture, Kandi was engaged to Ashley Jewell, another man Mama Joyce hated. The relationship ended on amicable terms, but the story turned tragic when Jewell was killed in a bar fight in Atlanta.

Who could forget that time Kenya Moore dragged Walter Jackson along for a trip with the cast of RHOA? I can’t. But just in case you did, this was the guy who sat back and watched while Kenya flirted with Apollo, embarrassed her in front of her friends, and basically called her a liar after they broke up.

Before there was Kroy to sweep her off her Gucci-studded feet, Kim Zolciak had Big Poppa, the never-seen addition to the RHOA cast who bankrolled her lavish lifestyle and was reportedly married to somebody else.

Now I bet you definitely forgot about this one. Remember that time Kim reportedly dated a woman? Yeah, that was brief and kind of mysterious.

This was a relationship doomed from the start. Ken showed up randomly in Kim Richards’ life when sister Kyle came to help her move her things. The relationship only lasted for a few episodes (longer in real life, of course), but it ended dramatically when Richards thought she was pregnant and soon after admitted she was an alcoholic.

Ah, the dramatic love lives of these women. Thankfully, most of them happy and healthy today — both in relationships and not.