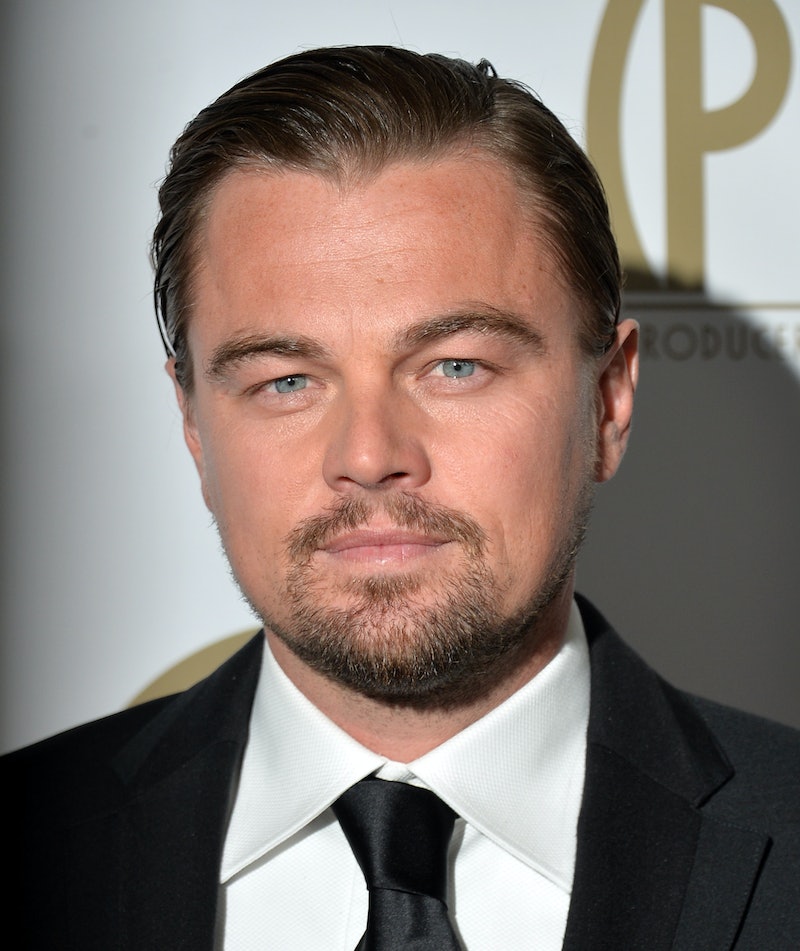 If you ever happen to stalk Leonardo DiCaprio as often as I do, you would know that the heartthrob does not have any movies listed on his IMDb page because Leonardo DiCaprio is taking a break from acting. That is, not only did I black out after hearing this news earlier in 2013, but DiCaprio told German publication, Bild, “I am a bit drained. I’m now going to take a long, long break. I’ve done three films in two years and I’m just worn out."

However, he did also state that he wanted to improve the world, which I find odd considering his good looks and superb acting already improved my world. So, after this year’s Academy Awards, where DiCaprio has been nominated for Best Actor thanks to his role in The Wolf of Wall Street, it’s a mystery as to the actor’s actual plans for the future. So here are my predictions:

1. He Will Discover Women Who Aren’t Models

I’m not trying to rush him, but DiCaprio is 39 and when it comes to his supermodel girlfriends, I’m kind of over it. Although the actor told Extra that he isn’t quite sure about marriage right now, stating, “I take it as it comes. We’ll see what happens in the future,” I’m pretty sure he’s going to get engaged and possibly married before he turns 45, because that’s just pushing it. Actually, he’s already past the point of pushing it.

Although it is not 100 percent set in stone that he will propose to me, I foretell DiCaprio meeting a non-celebrity during his time out of the public eye. Hopefully. Jack will meet his Rose, except it’ll be more like a Prince William meeting his Kate Middleton type of deal. Clearly, I’m a bit salty about the whole supermodel craze. When he does get engaged, though, the Internet will break.

2. An Oscar Mansion Will Be Erected

After receiving an Oscar, I expect that a) his fans will gather for their DiCaprio-finally-winning-an-Oscar parties around the world, b) someone will owe me $100, and c) the actor will start construction for his new house in the shape of an Oscar. The mansion will be gold and models will flock to it. Yet he’ll turn them all away because he’ll have met a non-model already.

3. Leo Will Pull A Beyonce

When Beyonce released an entire album on iTunes, which she had been working on without anyone’s knowledge, the world bowed down and said “Queen Bey has done it again.” It was surprising for the first five minutes after hearing the news and then everyone was like, “Wait, this is Beyonce. Of course she would pull off a stunt like this.”

This is why, with DiCaprio as an equivalent to Beyonce in the movie industry — to me at least — I can only hope that he is working on some secret project that will be released within the next few years. Another movie involving Kate Winslet or a documentary called The Hardships Of A Man Who Was Always Snubbed At The Oscar’s would suffice, and I would be the first one in line for tickets. Also, I wouldn’t say that Rose and Jack getting it on in a car was exactly family friendly, but I would also be down to see a live NBC stage production of Titanic.

When the surprise is revealed, we'll all be like this:

4. He Will Begin His Travels And Drop Off The Face Planet

After all the turmoil that came from DiCaprio informing his fans that they would not see his movies for some time, he told Bild, “I will fly around the world doing good for the environment.” We were all sad that we would not be able to spend an hour and a half to two hours with Leo’s face on the big screen, but we applauded him for being so devoted to a worthy cause. I have no doubt that the Django Unchained actor will hop on a plane and lay low as he travels from country to country doing good deeds for the world. Only every now and then will we receive word from him.

5. A Baby DiCaprio Will Be Born

If there’s anything crazier than DiCaprio finally getting hitched, it would be DiCaprio fathering a child. The celebrity has often played a single man or a childless husband in many of his films, but I cried after discovering how mentally ill his character Teddy Daniels became in Shutter Island after (spoiler alert) his wife killed their children. This movie just proves how convincing his acting is, because I genuinely believe Leo himself would be a wonderful father. To my children. Realistically though, as much as I’d like to see him happily married, there’s a strong possibility that one day the headlines will read “Surprise! Leonardo DiCaprio’s Model Girlfriend Pregnant” because people seem to be doing the preggo thing before marrying more often. As long as he doesn’t name his child something ridiculous like Instagram (because Facebook and Hashtag are already taken) or Dr. Pepper (because Pepsi is old news), I’ll be satisfied.

Whatever my favorite actor does after the Oscars, I just hope he finds himself and returns to the acting world, because I don’t think I can go that long without some Leo in my life. And if he chooses to come apologize for ignoring me and chasing after all of those models, I will happily accept his hand in marriage... because how can you say no to this face?