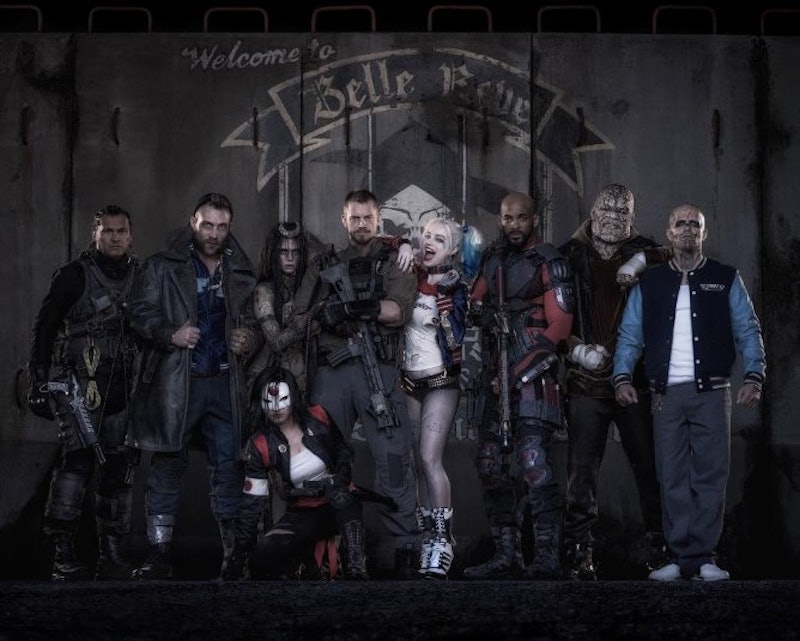 DC Comics continues to ramp up its movie universe in an attempt to compete with Marvel, and while the obvious starting point for the birth of their new continuity is Batman v Superman: Dawn of Justice, there's another movie that has diehard fans pretty excited. I'm talking, of course, about Suicide Squad. But since most casual fans aren't all that familiar with this property, there's a lot that people don't know about what Suicide Squad is really about. But don't worry. By the end of this article you'll pretty much be an expert on this group of villains/heroes.

Suicide Squad is based on the DC comic book of the same name, and is expected to follow roughly the same basic premise, which is this: a group of some of the world's most dangerous criminals are released from prison on the condition that they complete a task for the government; a task which will most likely get them killed (hence the name). The members of this group all have micro-bombs implanted under their skin as well, ensuring that should they try to escape or veer from their task, they will be killed. A lot of the specifics of the movie's plot are being kept under wraps so far, including the allegiances of certain characters and who/what it is they're fighting, but here's who we know is in the film at this point and what their roles are.

She is the government official who conceives the idea of the Suicide Squad and puts the team together. She has no superpowers, but is more often than not a supervillain in the comics. Her motivations are unknown, but many fans believe she'll be revealed as the true villain of the film.

Deadshot is a member of the squad, and like his name suggests, he's an expert marksmen. Unlike Marvel's Hawkeye, though, Deadshot is definitely pro-gun.

Another member of the squad, Quinn's defining feature is that she's psychotic. For real, she doesn't have any powers, she's just crazy to the point of being dangerous. In the comics she has a complicated relationship with the Joker, which will definitely play into the film in some way.

Flag is the Squad's leader, but he's no criminal. He's an accomplished military officer who is given the job of trying to control this gang of nut jobs, a prospect with which he's less than thrilled.

A member of the squad, Boomerang is an Australian assassin whose weapon of choice is, you guessed it, boomerangs. He's also a major scumbag.

A former L.A. gang member (hence the extensive facial tattoos), El Diablo actually has a legit superpower, which is kind of a rarity on this team. He is able to control fire, but unlike his squadmates, he's not a fan of killing people and is more conflicted about his status as a villain.

He's not really a crocodile, he actually has a medical condition that gives him a reptilian appearance. However, he's also big and strong with sharp teeth, and he literally eats people, so confusing him for a croc is understandable. He's on the squad.

The final confirmed member of the team, Slipknot is yet another assassin devoid of any superpowers. But unlike gun-toting Deadshot or boomerang-happy Boomerang, Slipknot's weapon of choice is ropes. All right then.

Katana is not a villain, she volunteers to accompany the team in the role of Flag's bodyguard. And she's pretty good at her job, since she's a kickass martial artist and has a magical sword capable of capturing people's souls.

Perhaps the most-mysterious role in the film, it's not known if Enchantress joins the squad at some point, if she's the film's main villain, or if she does something else entirely. What is known is that she's a normal woman who becomes possessed by the spirit of an ancient witch, giving her mystical powers.

Everyone is anxious to see Leto's take on the classic Batman villain, but Joker's role in the film isn't clear. Is he the main villain? Is he just there to make Harley Quinn stray from her task? He's featured heavily in the film's marketing, so his role is probably pretty big, but one thing is for sure: He's not a member of the Suicide Squad.

Eastwood's role has not been revealed, and the trailer makes it look like he's just another soldier tasked with keeping the squad in line. However, he's a pretty big name actor for such a mundane role, and rumors are flying that he'll become fan-favorite assassin and anti-hero Deathstroke at some point in the film.

The Caped Crusader is known to have a cameo in the film, in a scene where he goes after the Joker and Harley Quinn. Whether or not his role expands beyond that scene is unknown, but he should at least serve to connect Suicide Squad to DC's burgeoning cinematic universe.

There they are, your Suicide Squad cast members. It's a big cast full of some even bigger names, but whether that translates into the launch of a successful franchise or ends up a jumbled mess is something fans won't know until the film debuts on August 5.