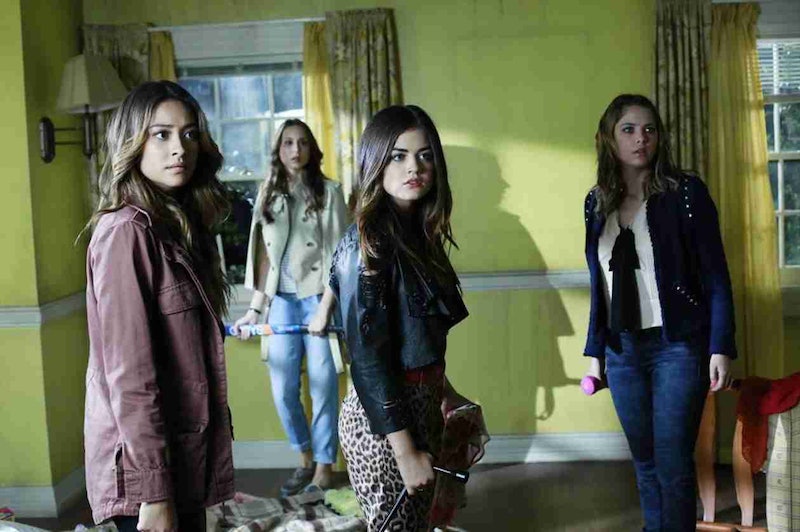 There once was a time when I would clear my schedule of homework, social media, and the like just so I could sit down in peace to watch Pretty Little Liars. When I first began watching the ABC Family show, all I cared about was how adorable Ezra and Aria were, despite how inappropriate their relationship was, and how I could look like Spencer every day for class. Of course, my friends and I also conspired after each episode to determine who we thought A was. Yet, after Pretty Little Liars' "Close Encounters" episode — during which things continued to be creepy and dramatic, and the plot still didn’t really move forward — my once-favorite show started to feel old.

Some of you may be raising your pitchforks and lighting your torches, but that won’t stop me from admitting that, as the series has aged, the creators of the show have dragged out each season. (And you thought The Hobbit trilogy was bad.) I’m still continuously impressed by the acting, especially from Troian Bellisario, Janel Parrish, and Sasha Pieterse, but I can’t help but notice that each episode’s storyline seems strikingly similar to the last.

Let's take a look back at last week: First, Ezra acts extra freaky as usual, making it unrealistic that no one else has noticed how peculiar he’s been. I practically jumped off the couch two episodes ago when he snooped around Hanna’s room without her mother noticing. I’m also 90 percent positive that Ezra isn’t A and that his role has changed just because the whole attractive, intelligent professor business couldn’t last forever without boring the audience. The show has had us on a roller coaster since its first episode, and I find it unlikely that the creators would make Ezra A, because that’s just too easy. Plus, he doesn’t seem like the kind of person who would regularly use “bitches” and “kisses” in A's messages to the girls.

To boot, Pretty Little Liars' relationships are never-ending (and always complicated), and I’m not sure how much longer I can take it. Not only do I dislike Ezra right now, but now Aria is also starting to work my nerves after leaving Jake. He was a hunk and vowed to protect her. Oh yeah, and he didn’t have a secret child and baggage with his whole family like Ezra did. She’s been extremely fickle. Get over it, Aria.

But my frustrations don't begin and end with Aria. If we’re discussing the bigger picture here, it bothers me that the girls are always losing important pieces to the puzzle. Just see Ali’s secret journal. There are four young women searching for answers here, and, yet, A always seems to be ahead of the game. If I had that journal, I would’ve guarded it with my life, or at least memorized all the pages before eating them so no one else could get to Ali.

Oh, and let’s not forget those eerie moments when the girls get locked into a closet, basement, lodge, [insert location here] and almost face their death, when suddenly [hero’s name here] rescues them. Where is your courage, ladies? Why can't you save yourself every once in awhile? You would assume they could after how much crap they’ve been through.

All that said, I know I’ll watch next week’s episode anyway. But, this time around, I might even do my French homework while I watch it. (Gasp!) Really though, Pretty Little Liars — just tell us who A is already, because this is how I feel every time the show ends: