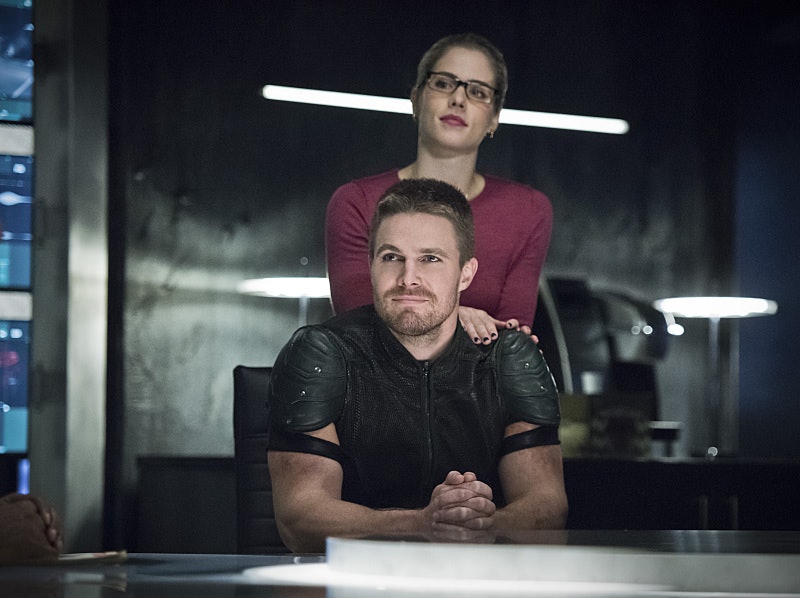 It's been well over a month now since our beloved Felicity Smoak suffered multiple gunshot wounds in the Arrow midseason finale, but our fear for her safety has only grown more adamant with each passing day. Luckily, the series took pity on us and wasted very little time in revealing what actually happened to Felicity in the aftermath of her Arrow injuries. The good news is that she is definitely alive. The bad news is that it still came with a devastating cost. After being rushed the hospital and suffering through multiple surgeries, the doctors discovered that Felicity is paralyzed from the waist down due to the save damage done to her spinal cord, which means she'll never be able to walk ever again.

Many speculated that this could end up being the case, especially since there was a highly spoiler-y Australian promo circulating around the internet. But that still didn't make seeing it play out firsthand any less difficult to endure. Felicity may have never donned a mask or cape, but she's still always been one of the most badass heroes on this show. And while I'm still fully confident she'll eventually get back to her tech savvy ways, it's heartbreaking to see her suffer in any way, shape, or form. However, she wasn't the only one to be vitally impacted by this news. Oliver, of course, blamed himself for what happened to her and vowed vengeance on Damien Darhk once and for all, meaning he had every intention of killing him.

This isn't the first time Oliver has avoided dealing with his emotions, but it hurt my heart to see him not be there when Felicity needed him most. He was too busy trying to track down Darhk and make him pay. (I love you, Ollie, but you never learn.) And even though Oliver insists that this renewed sense of violence is just a one time thing, that's a slippery slope to go down. So while I'm overjoyed that Felicity is still with us, I'm worried about her future with Oliver and the dark path he's heading down. It's like Diggle said: "Don't lose what made her fall in love with you in the first place." She makes him a better man. Let's hope his love for her is stronger than his hate for Darhk.