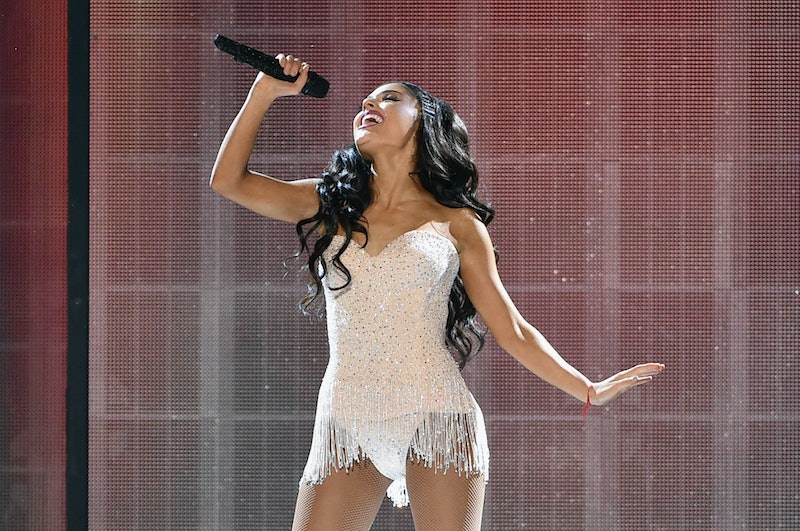 On Wednesday evening, big-voiced pop star Ariana Grande teased new music on Snapchat (as is her wont), posting two snippets of an upcoming song that's rumored to be called "Be Alright." The 22-year-old singer first teased the tune all the way back in June 2015, and now that she's teased it again, many fans are wondering if it could be the next single from her forthcoming new album, which may or may not be titled Moonlight. (Grande told Jimmy Kimmel recently that she's thinking about changing it.) Grande's last single, "Focus," premiered at the end of October 2015. Then, less then two months later, she put out a six-track holiday EP called Christmas & Chill. She's certainly committed to keeping her fans in new music! So, when does Ariana Grande's "Be Alright" come out?

Grande has yet to reveal the song's release date, but we may be able to gather some clues by looking at her past release schedule. For example, there was a little over two months between the premiere of My Everything's lead single, "Problem," and its second single, "Break Free." Two months have already passed since "Focus" debuted on Oct. 30, 2015, but I think Grande bought herself some additional time by unveiling Christmas & Chill on Dec. 18, 2015. Two months from that date would put us at Feb. 18. Will "Be Alright" grace us with its presence sometime within the next four or five weeks?

It's certainly a possibility, but I'm going to encourage you to keep your eyes on Grande's Twitter timeline for more info. Just as the "Bang Bang" hit-maker is committed to keeping her fans in new music, she's committed to dropping hints about when that new music will arrive.

As any true Arianator will tell you, Grande promised fans several months ago that when she uses the word "soon" to describe the release of new music, she means we'll be hearing it in 10 days or less. So, if/when she starts tweeting about "Be Alright" coming "soon," you'll know we're close!

Though "Focus" peaked at No. 7 on the Billboard Hot 100 chart, the song wasn't particularly well-received by critics, several of whom criticized it for sounding too similar to "Problem." Unfortunately, the lukewarm reception to the single seems to have dampened the buzz for Grande's upcoming project a bit. Hopefully "Be Alright" — which, to my ears, doesn't sound anything like the material she's released in the past — will help get the campaign "back on track."

More like this
How To Listen To The 'Love Island' 2022 Soundtrack
By Liv Facey and Sophie McEvoy
Photos Of The 'Elvis' Cast vs. Their IRL Counterparts Will Have You All Shook Up
By Grace Wehniainen
Everything To Know About J-Hope From BTS’ Solo Album ‘Jack In The Box’
By Stephanie Topacio Long
Taylor Swift's “Carolina” Theme For 'Where The Crawdads Sing' Soundtrack Is Here
By Jake Viswanath
Get Even More From Bustle — Sign Up For The Newsletter