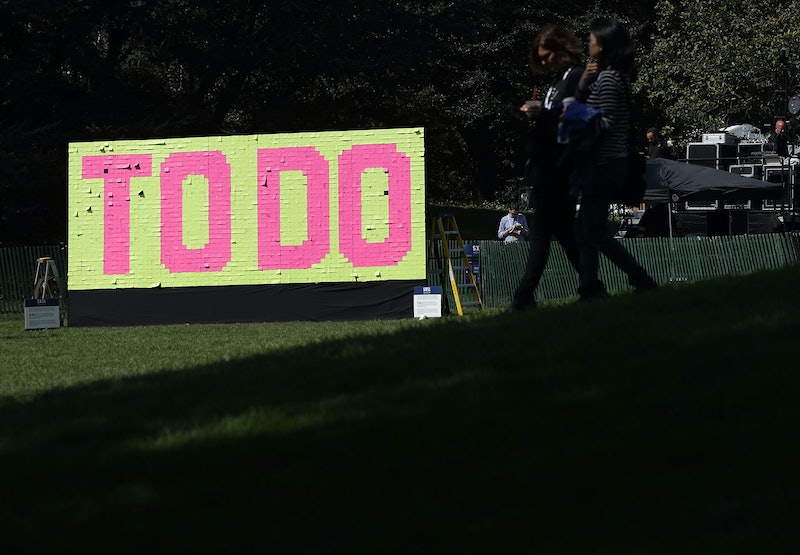 It's a common (overused) trope: guys forget anniversaries, birthdays, taking the trash out. That thing you've asked him to do a million times, super nicely. But a new study suggests that it's not just an excuse — men are legitimately more forgetful than women, no matter how old there are.

The cross-sectional study, conducted in Noway, analyzed 37,405 men and women over the age of 30. They were asked nine questions about memory, including whether they had issues remembering dates, if they could remember things that had happened a few years before, and whether their memory had changed since they were younger. Nearly half of them — both men and women — reported minor memory issues, but on eight out of the nine items, more men than women reported memory problems.

"We have speculated a lot about why men report more frequent problems with remembering than women do, but have not been able to find an explanation. This is still an unsolved mystery," he added.

Before we jump on the highly addictive gender differences bandwagon (in 2011 alone, there were over 3,370 articles about sex differences) , let's keep in mind that the results are based on the subjects' answers — in other words, men reporting themselves as having more difficulty remembering name, dates, etc. Considering how much flack men are given (at least in the media) for forgetting, their answers could also be a reflection of how much they feel they ought to be remembering, rather than how much they are in actuality.

Either way, with another survey recently finding that millennials aged 18-34 are significantly more forgetful than those 35 and above, at least it's becoming clearer why the most common password of 2014 was "123456."

More like this
Wimbledon Alters All-White Kit Rule Amid Candid Period Discussions
By Catharina Cheung and Rachel Mantock
This Company Will Send STI Tests Right To Your Door
By Lexi Inks
Iran Has Issued A Death Sentence Over Mahsa Amini Protests
By Catharina Cheung, Darshita Goyal and Maxine Harrison
15 Ways To Deal With A Toxic Family During The Holidays
By Gabrielle Moss and Carolyn Steber
Get Even More From Bustle — Sign Up For The Newsletter