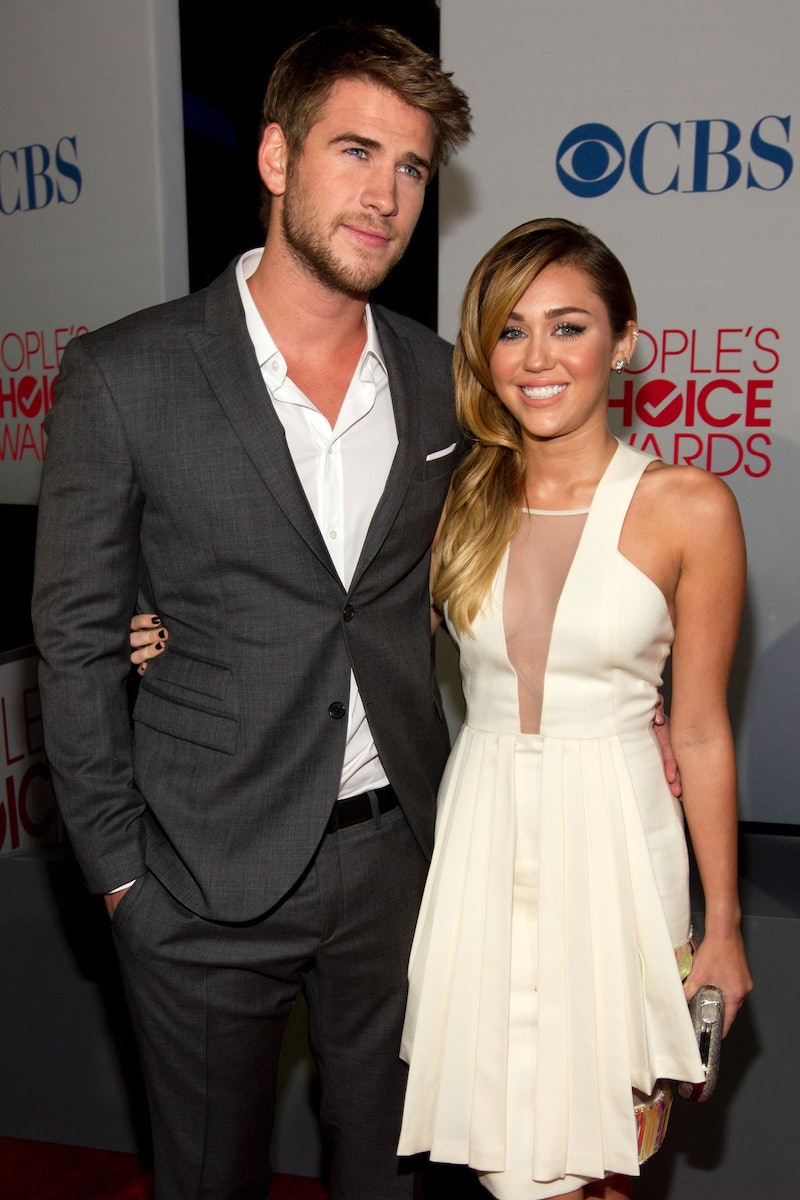 With the exciting news that Miley Cyrus and Liam Hemsworth are reportedly getting back together, it's only to be expected that Miley/Liam shippers everywhere are now brushing up on every tidbit about the couple that they can get their hands on, particularly with all of the tell-tale clues that are practically irrefutable proof that Cyrus and Hemsworth are reconciling. You know, like the fact that Us Weekly is reporting that that the two are engaged (and living together!) and Cyrus herself took not one but three selfies literally flaunting what looks very much like her old engagement ring. And with all of the hullabaloo surrounding their adorable reconciliation, it's pretty much crucial that we look back on how their whole romance started to begin with. Like answering the question: How did Miley Cyrus and Liam Hemsworth meet?

(Bustle has reached out to Cyrus and Hemsworth's reps regarding the reports they are engaged and moved in together, but has not yet heard back.)

It's pretty common knowledge that the two first met and fell in love on the set of Nicholas Sparks' The Last Song, putting the beginning of their relationship back in June 2009. While their troubled characters were falling in love in the 2010 film, Cyrus and Hemsworth were makin' it happen IRL in the sweet, sweet summertime on Tybee Island off the coast of Georgia. At the time, Cyrus was 16 and Hemsworth was 19, though they didn't go public with their relationship until March of 2010, when Cyrus confirmed their romance on the red carpet at the Oscars. She was 17 and Hemsworth was 20.

Factor in an engagement two years down the line, a breakup, and a whole lot of twerking, and here we are: 2016, and Cyrus and Hemsworth look like they're ready to take the plunge yet again. While I could delve into an entire essay about how they have a legit chance at things working out this time around — they're both older, have remained close since calling off their engagement three years ago, and have had a lot more life experience — instead I want to talk about the magic of a Nicholas Sparks movie and how that means they are now going to be together forever, just like their characters in The Last Song. It's fate, you guys. (Let's just hope everything's OK with Billy Ray.)

In fact, Cyrus and Hemsworth's real-life relationship is kind of like a Nicholas Sparks novel all on its own, if Nicholas Sparks got down and dirty with glitter and giant penises onstage and inappropriate foam fingers. And it's not like Hemsworth and Cyrus are the first couple to star in a Sparks movie and quickly become a couple, either. Like the Ryan Gosling and Rachel McAdams before them, Cyrus and Hemsworth got caught up in the romance of their characters and translated that to reality, much to the delight of their fans. (Things didn't ultimately work out for Gosling and McAdams, but let me have my moment here.)

Maybe it was the southern charm and gorgeous locale of Southern Georgia that swept them up in romance. Maybe it was the fact that they were playing the romantic leads and spending so much time together that they fell in love off-screen. Maybe filming a movie was just their meet-cute and the fact that they got engaged has more to do with who they both are as people and how much they have in common and how in love they were.

But I refuse to believe that there wasn't just a little Nicholas Sparks romance thrown into the real-life version of their relationship, just because I'm a hopeless romantic and because they were literally filming a picture-perfect Nicholas Sparks film when they fell in love. And here's to hoping that they'll get The Last Song happily ever after that their relationship deserves — even if Sparks has to write it himself.

More like this
Selena + Chef Season 4 Was Filmed At Hannah Montana's Old Malibu House
By Jake Viswanath
At 14, Rachel Sennott Had A Sexual Awakening While Reading 'Twilight'
By Samantha Leach
Jamie Foxx Revealed The Question That Got Cameron Diaz To “Un-Retire”
By Grace Wehniainen
Before 'Bullet Train,' Revisit These Brad Pitt 'Fight Club' Premiere Photos From 1999
By Grace Wehniainen
Get Even More From Bustle — Sign Up For The Newsletter