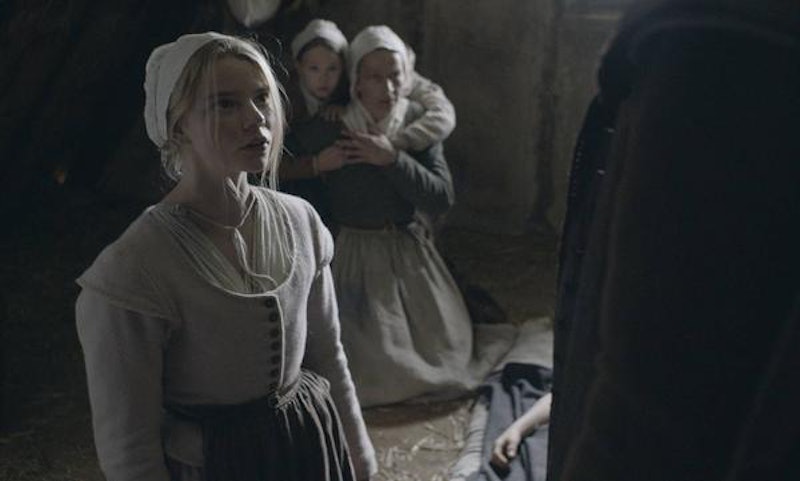 Throughout history, for some convoluted reason, female sexuality and bodily empowerment has been seen as a threat, especially within deeply religious and socially strict communities. For as long as women have been struggling for autonomy, their sexuality has been a major part of the fight, with women learning how to embrace sensuality that they’ve long been told is shameful, and by challenging the societal norms that for centuries have declared such things as a threat. Which is why it’s so interesting that two current films, The Witch and Mustang, explore how the oppression of young women is inherently connected to their sexual development and prove that despite centuries of advancement, the problems continue to persist.

The Witch first premiered at the Sundance Film Festival in 2015 and opens in theaters Feb. 19. Directed by Robert Eggers, who won the Directing Prize at the festival, The Witch follows a 17th century family who, for unknown reasons, is banished by their colonial community and lives isolated in the New England wilderness. The patriarch, William, is a pious Christian Puritan whose belief in God dictates the actions of the entire family, which consists of his wife, teenage daughter Thomasin, son Caleb, twins Mercy and Jonas, and newborn Samuel. When Samuel goes missing, the family begins to suspect Thomasin of witchcraft. The more horrific and sinister things that occur the more Thomasin is accused, though she claims innocence throughout.

The Witch is not only a satisfyingly creepy horror film, it also manages to explore Puritan ideas of female sexuality and empowerment while successfully offering a chilling story. Thomasin, being the only teenage girl in the family, is almost immediately accused of witchcraft as a result of her budding womanhood. Her pre-teen brother Caleb, coming into his own manhood, at times takes quick glances at her growing chest, exaggerating the repression these children must be experiencing as a result of their ignorance and strict upbringing. That the film's witch in question is a seductive, large breasted woman adorned in a red cape solidifies the idea that female sexuality is the result of a deal with the devil, drenched in sin and definitively unholy.

It’s now become commonly accepted among academics and historians that the witch hysteria that swept North America in the late 17th century was the result of a repressive religious society’s method of controlling women’s empowerment and female sexuality. In a literature review titled, “Control of Uppity Women Behind Witchcraft Accusations?” Intercultural Communications professor Deborah Pincon writes, “The witchcraft trials were a means by which women and particularly young girls were socialized to be sexually obedient to their husbands... women who express ‘excessive’ assertiveness, sexuality, aggressiveness, or autonomy, through verbal and nonverbal communicative behaviors, would be more likely to be accused of witchcraft than those who abide by their society's prescriptive norms for female behavior.”

Indeed, female sexuality has somehow always been considered a “frightening” concept, especially within patriarchal societies full of men who would feel emasculated by losing such power. Stacey Schiff, author of "The Witches," a comprehensive account of the 1692 Salem witch trials, asserts, “There's something about teenage girls, coming into their sexual lives and coming into their power, that Americans consider scarier than Harvard-educated magistrates who accept accounts of women flying through the Boston night.” The Witch, and indeed many artworks exploring witchcraft, successfully explores this duality of terror. To the strictly religious Puritans of the late 1600s, both the literal possession by the devil and a sexually empowered woman were equally as threatening.

Flash forward over 300 years and things haven’t exactly gotten better. Though here in America women are no longer regularly accused of witchcraft, elsewhere in the world societal pressures and adherence to religious custom are used to repress women at vulnerable ages. The Academy Award-nominated film Mustang, now playing and directed by Deniz Gamze Ergüven, tells the story of five sisters of varying ages in rural Turkey. On a hot day after school, the girls splash in the ocean with some male classmates and sit on their shoulders playing a game of chicken; a game practically every child in the world has played. When their grandmother berates them for “rubbing their private parts on boys necks,” the girls are sent to a doctor for an invasive “virginity report,” and then essentially jailed inside their own home, their uncle welding bars on all windows. “The house became a wife factory,” says youngest sister Lale in a voice over, while their aunt tries to marry them off one by one, to both happy and tragic results.

While much of Mustang is an incredibly moving and joyous look at sisterhood, female bonds, and the the power of will, it’s impossible to ignore the larger societal sexism at play. The strict expectations of the girls’ Turkish culture are rooted in Islam, and though ultimate dishonor would come from their inability to land a husband, the importance of a woman’s “purity” lies in religious expectation. One of the girls is married and doesn’t bleed upon having sex on her wedding night. The following scenes of family members demanding to see the sheet, or the resulting trip to the hospital so a doctor can locate her hymen would be hilarious weren’t it for the invasive and messed up reality at hand.

The sad part about both The Witch and Mustang is the ignorant idea that girls and women become threatening to patriarchal societies and strict religions by simply existing. For the sisters of Mustang, their childish games are misconstrued as sexually deviant, while Thomasin’s ultimate sin was simply growing up into a woman. Yet while one can experience The Witch as a genre horror film taking place in a historical time, Mustang proves that 300-year-old repression still exists. That teenage girls are subjected to ludicrous dress codes so as not to “distract” young boys, rape victims are blamed for the clothes they wear, and the importance of a girl’s “purity” pervades many religions the world over, shows that many cultures have still not accepted the idea of normal female sexual urges. Thankfully films like The Witch and Mustang exist to help us point out the problem.