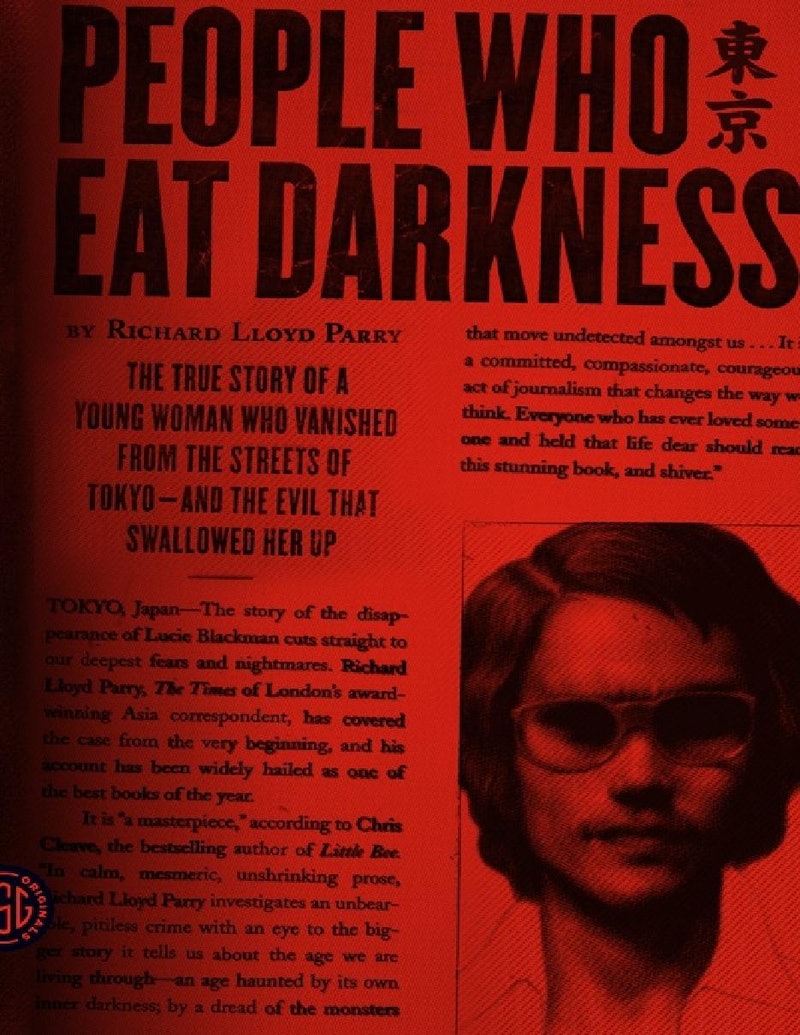 And our society's burgeoning obsession with the true crime genre continues to grow: This Thursday, Deadline reported that 20th Century Fox had acquired the film rights to People Who Eat Darkness: The Story Of A Young Woman Who Vanished From The Streets Of Tokyo — And The Evil That Swallowed Her Up. A 2010 true crime book by British author and Times foreign correspondent Richard Lloyd Parry, this lengthily-titled tome tells the story of Lucie Blackman, a 21-year-old English woman who was living and working in Tokyo when she was abducted and murdered by Joji Obara in 2000. The book is not just an examination of the murder itself, but also, as The New York Times called it, a "scorching indictment of bumbling law enforcement [in Japan]."

In the face of the recent successes of Serial, HBO's The Jinx, and Netflix's Making A Murderer , it's not surprising that film studios and television networks are jumping on the true crime bandwagon. It's fortunate, then, that there is no dearth of compelling stories to tell. While some of the more famous examples of the genre — including In Cold Blood and Helter Skelter — have already been adapted in various forms, there are plenty of stories out there that have yet to be told onscreen.

Here are 11 true crime books that should follow People Who Eat Darkness to the big — or small — screen:

1. And The Sea Will Tell

How many true crime stories take place on the high seas? This case, involving two separate couples who happen to find their way to the same remote tropical island at the same time — and only one of whom will ever return — would automatically stand out from the rest given its exotic setting.

In 2007, Joshuah Bearman published an article in Wired titled "The Great Escape." Six years later, the feature film adaptation of that article, Argo, had one the Academy Award for Best Picture. In 2014, he co-published an article in Atavist and GQ titled "Coronado High" about how a group of California high school students built a $100 million drug empire in the 1970s. Next stop, Oscars?

3. The Devil In The White City

Leonardo DiCaprio purchased the rights to this fascinating book back in 2010... but there has been little forward momentum on the project since then. It's a shame, because the book would undoubtedly make a compelling miniseries out of the parallel stories of architect Daniel Burnham and serial killer H.H. Holmes.

Before his arrest in December of 2003, registered nurse Charlie Cullen murdered at least 40 people — all his patients — and is considered one of the most prolific serial killers in American history. Given the nickname "The Angel Of Death" by the media, Cullen's life story is one that begs to be told on the big screen.

5. How To Get Away With Murder In America

6. The Incredible True Story Of The Collar Bomb Heist

Considering how many of Grisham's novels have been adapted into feature films — The Client, The Firm, The Pelican Brief, The Runaway Jury, among others — it's a wonder that this book, one of the author's only forays away from fiction, hasn't yet gotten the big screen treatment.

Since the culprit in this case — an unknown person who has murdered at least a dozen escorts on Long Island since 1996 — has yet to be caught, this true crime book can't focus on the murderer or a trial. Instead, the focus here is on the victims, a sympathetic portrait of troubled lives cut short. It's easy to imagine this format lending itself well to a gripping (if depressing) miniseries.

9. The Stranger Beside Me

Ann Rule was already a crime writer — penning articles for True Detective magazine — when she started working at a suicide hotline call center in 1971. She quickly befriended the work-study student who sat next to her, a young fellow named Ted Bundy. He would later be arrested in 1978 for the murders of around 30 young women and girls. That's the kind of coincidence you usually only see in the movies.

10. The Suspicions Of Mr. Whicher

If there's two things that our culture loves, it's true crime and period British shows. Downton Abbey and Serial collide in this story about a Scotland Yard detective investigating the death of a three-year-old boy at his family's lavish country estate in 1860. I sense our next great TV addiction...

11. Under The Banner Of Heaven

Maybe it's because I recently went to see the Broadway musical The Book Of Mormon, but there's something about this story of two Mormon brothers committing cold-blood murderer that strikes me as extra chilling. The topic of religiously-fueled violence is perhaps even more pertinent today than it was when Krakauer published this book in 2004.

Which of these will be our next true crime obsession? We may see adaptations of none or all of these sometime in the near future, but one thing is certain: our fascination with the true crime genre won't be fading away anytime soon.