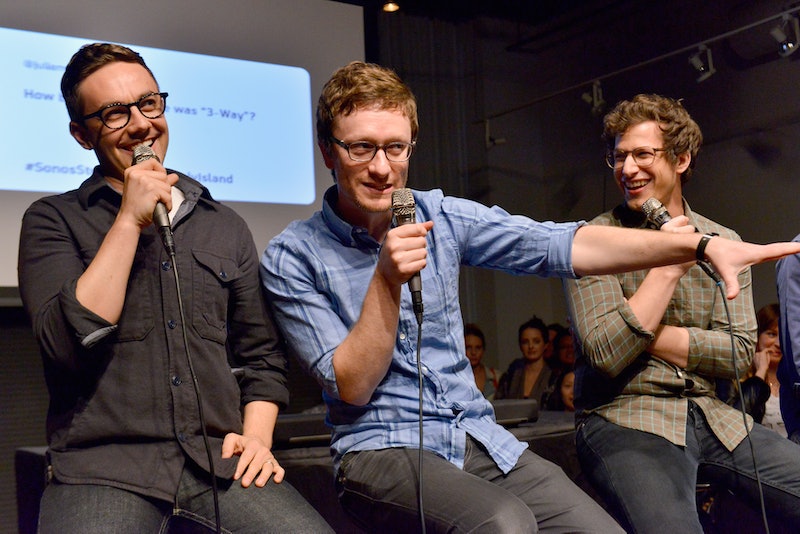 There has been plenty of press recently about the number of new males on Saturday Night Live, and some articles focus on the lack of screen time for the five new white male cast members. This is not one of those articles. After watching this week's show, I was struck by the new possibilities that these members are exploring, namely, Beck Bennett's and Kyle Mooney's emerging redefinition of all things bromantic.

Bennett and Mooney have worked together extensively outside of SNL: they co-founded the sketch comedy group Good Neighbor, which is based in Los Angeles. Bennet, Mooney, and fellow Good Neighbor member Nick Rutherford were all hired by SNL in August of 2013; Rutherford was brought on as a video director, no doubt because the group's films were already garnering popularity of the Lonely Island ilk. One of their videos, "Toast," documents three friends making a toast before a night on the town. Mooney continues to interrupt their drinking with sentimental comments about their friendship, which makes it look, from the outset, like a spinoff of Champ Kind's drunken confessions on Anchorman. Once they get to the actual toast, however, it becomes clear that they are all feeding off the same boyish enthusiasm for synchronization and ritual. Their toast routine, in fact, involves choreographed dancing and a number of miniature skits that range from surviving a robbery and a beast attack to catching up with ex-girlfriends. With films like "Toast" in mind, it's easy to see how Mooney and Bennett bring their natural chemistry to the SNL screen.

"Pranks when you're blacked out/ Jokes about roofies/ Making girls kiss/ Marry your man."

"Promise to cherish/ trust and respect him/ Crushing pussy/ Marry a man."

What fascinated me about the video was the overall message: when we consider it alongside the raucous actions of hyped up heterosexual college kids, the idea of one man taking another's hand in marriage becomes both morally and aesthetically preferable. If one is forced to choose between clogging toilets with solo cups and selecting flowers for a gay marriage, the latter wins on all counts. Also, it's delightful to watch Andy Samberg and Zach Galifianakis "charming the in-laws" and bowing their heads in reverential respect for the sanctity of their union.

Flash forward to this season of SNL, when Bennett and Mooney pick up the mantle. "Boy Dance Party" came out on October 13, 2013, and features a group of men, including host Bruce Willis, watching football on a Sunday night. As the ladies leave, however, the men break out into a full-on dance party. Taran Killam raps, "Not homoerotic, just a call for brotherly unity/ To dance our stress away without no womanly scrutiny." Bobby Moynihan follows up with, "In the olden days (way back)/ The women stayed at home while the men went to work/ But now it's time for the ladies to get out/ So the men can twerk." The dance moves are hilarious and disjointed, rather like the Bluth family's chicken imitations. This video takes the classic "male gaze" and flips it; in this reality, women are the ones who own the gender norms. It's only when they leave the house that these men can recognize their true, carefree, sack-shaking selves. Yes, "boys like dancing, too."

In the same episode, Bennett and Mooney star as Sigma frat brothers introducing freshmen to their own "house rules" for beer pong. The rules start out in a fairly conventional way, but quickly diverge from the standard script. If one team calls a cup and hits it, the other team has to whistle. Mooney explains, "It's just a chance for us to learn what makes you a very special and unique person inside of you." Other rules of the game involve creating a custom roller coaster, being assigned a pen pal, and featuring in a personalized baseball card. In this world, being in a fraternity is a way to let your character and creativity shine. The fraternity brothers chant "chug, chug, chug," as a toy train laps the table with its precious cargo of ping pong balls.

This week's episode, meanwhile, featured a skit without Bennett and Mooney that still involved men overcoming their put-on toughness to revel in the gentler side of life. In "The Hit," Kenan Thompson, Taran Killam, and Jay Pharoah pull up outside an apartment on a snowy night. They lock and load their guns in preparation for blowing away their targets. Thompson kicks off the divergence from their macho conversation, commenting, "Old Man Winter really… really outdid himself tonight." Killam jumps onto the bandwagon of childlike wonder, leaving Pharoah to play the straight man still focused on the hit. Killam and Thompson sing Carole King's "So Far Away" in harmony, and Pharoah finally becomes entranced when he notices a rabbit in the snow. He leaves the vehicle to pet the rabbit, only to be gunned down as he approaches his new friend. In this video, sentimentality can get you killed.

Finally, Bennett and Mooney revisit their bro roles in "Inside SoCal," in which they play two West coast friends describing their pal Keith's party at his dad's condo. Mike O'Brien and Brooks Wheelan make a brief, wordless appearance, Killam sums up Philomena with, "Old people are pretty tight," and Mooney helps Jonah Hill (Keith) delve into his relationship with his father after Moynihan (Keith's dad) breaks up the party. Mooney's voice makes much of the emotional exploration possible. He tends to fade off at the end of his sentences, giving each statement a somewhat wistful quality. It is his gentle earnestness, combined with Bennett's matter-of-fact pronunciations, that lights the duo with a hopeful fire that moves beyond sarcastic male banter. This is not a sketch where men are pretending to act like women for cheap laughs; this is the flexing of an often-overlooked outlet of male expression. You can be sensitive and straight, hopeful and heterosexual. You can have emotional moments with your friends without having to cross the line into full-on attraction.

Bennett, Mooney, and the entire cast of SNL still have plenty of room to explore this new outlet. In clips like "The Hit," a character dies because he forgets himself in a hyper-masculine world. In "Boy Dance Party," their carefree male bonding cannot take place in the same room as female bonding. There are still social limitations to what men say to one another and how they say it, and it is by pressing these social norms and overriding them that the new members of SNL can make us actually consider how we define male friendship.