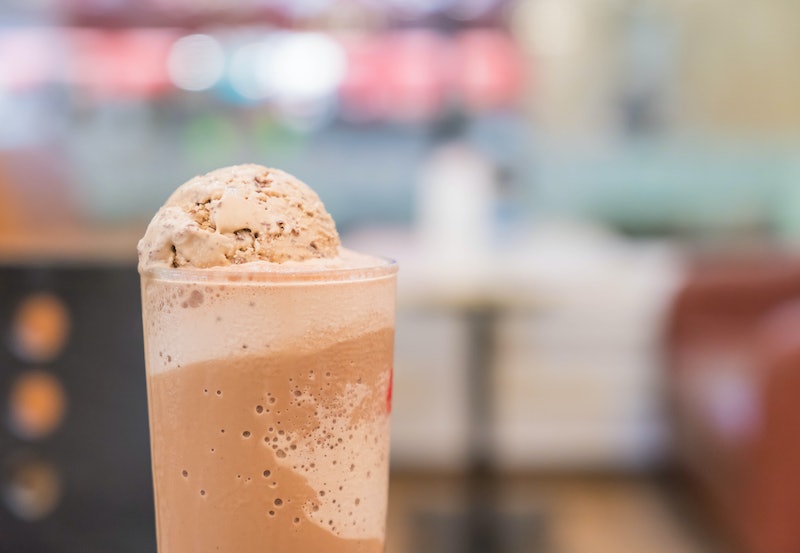 I stopped eating dairy completely about six months ago. Though I was already a vegetarian, I was still putting cream in my coffee, and enjoying the occasional pizza and ice cream. But when I learned more about the dairy industry, I realized that for me, there was no way I could ethically continue to eat milk or cheese and feel good about where my food was coming from. I decided to cut out animal products out altogether, which was actually much easier than I thought it would be — especially because I can still eat delicious vegan pizza and rich coconut milk ice cream. Yes, it's a moral improvement for me, but it's also a physical one: because milk is actually pretty bad for you.

When I eat a ton of vegan food, I just don't feel stuffed or bloated in the same way I did when I would eat dairy. I just feel ... lighter. Perhaps that's because I, like many people, was not as good at digesting dairy as I thought I was. I know my mom is lactose intolerant — she has stories about being force-fed milk in her preschool, back in the '50s — and so are most Ashkenazi Jews. And most people of color. And ... basically everyone besides certain white europeans. As it turns out, that's because dairy — especially cow's milk — just isn't very good for your health, and most of us aren't made to process it.

If you've been thinking about cutting down on dairy, or you're wondering if you're sensitive to it, read on for seven health reasons why you might want to consider eliminating milk from your diet.

1. You Probably Can't Digest It Properly

You might not be diagnosed as lactose intolerant, but an astonishing three-quarters of us actually lack the enzyme to properly digest cow's milk, and suffer digestively from the stuff. Most people begin to produce less lactase, the enzyme that helps with the digestion of milk, when they stop breastfeeding, around two years old. If our families don't come from someplace that has raised dairy cows for centuries, it's just not in our genetics to be able to process it. An estimated 98 percent of Southeast Asians, 90 percent of Asian-Americans, 74 percent of Native-Americans, 70 percent of African-Americans, and the majority of Jewish, Latino, and Indian people all suffer from lactose intolerance.

Often, symptoms might be subtle enough that you won't notice how much better you feel until you cut dairy out. But people who suffer from asthma, headaches, fatigue, and digestive problems have also been shown to experience marked and often complete improvements in their health after cutting milk from their diets. One study removed dairy from the diets of 48 people suffering from either migraines or asthma — and 33 of them reported their condition improved significantly.

2. It Actually Makes You More Likely To Have Osteoporosis & Break Bones

It sounds counterintuitive, I know: the dairy industry has done an excellent job of equating milk with strong bones and preventing osteoporosis — but the research doesn't back it up.

Studies also indicate that when it comes to preventing osteoporosis, milk may actually increase women’s risk of getting the disease. A Harvard Nurses’ Health Study, which followed more than 72,000 women for 18 years, showed no protective effect of increased milk consumption on fracture risk. Instead of promoting bone health, animal protein in dairy products can have a calcium-leaching effect. Prof. T. Colin Campbell, professor of nutritional biochemistry at Cornell University, puts it this way: “The association between the intake of animal protein and fracture rates appears to be as strong as that between cigarette smoking and lung cancer.”

You should, of course, get enough calcium — but experts say you're much better off getting it from dairy-free sources that don't carry all these risks. On average, we absorb just 30 percent of the calcium found in milk, yogurt, and cheese; but we absorb twice the amount of calcium if we eat veggies like kale, broccoli, bok choy, spinach and lots of other plant-based foods that are really good for you in lots of ways.

3. There Are Lots Of Hormones In Milk

This is true even if your milk and yogurt is organic. Because dairy cows are kept on sex hormones or pregnant for their entire lives in order to lactate for humans year-round, when you consume dairy, you're also taking in a significant amount of the sex hormones estrogen and progesterone. We know that an increased exposure to estrogen increases the risk of cancer, and dairy accounts for 60 percent to 80 percent of estrogens consumed by humans today.

"Among the routes of human exposure to estrogens, we are mostly concerned about cow's milk, which contains considerable amounts of female sex hormones," Dr. Davaasambuu Ganmaa said in a talk at Harvard. Hormones in milk might also be to blame for the rise of "man boobs": A 2010 Japanese study found that men's testosterone levels decreased after they began drinking milk.

When it comes to non-organic milk, your risks are even higher. In addition to the natural hormones and growth factors produced within a cow’s body, milk contains synthetic hormones such as recombinant bovine growth hormone (rBGH) which is commonly used in cows to increase the production of milk. Once introduced into the human body, these hormones may also affect your normal hormonal function.

4. It Increases Your Risk Of Cancer

If you have a history of cancer in your family, you might want to seriously watch how much dairy you're eating. In 2006, Harvard researchers published the results of a meta study that looked at 100,000 women aged 26 to 46. Those who had the highest intake of meat and dairy products also had the highest risk of breast cancer (33 percent more than those who consumed the least). For men, over 20 studies have established a strong link between prostate cancer and milk consumption.

A more recent study published in the British Journal of Cancer, which followed 22,788 lactose intolerant participants from Sweden, showed that low consumption of milk and other dairy products is linked with decreased risks of lung, breast, and ovarian cancers. It makes sense — less exposure to excess sex hormones, less cancer risk.

5. There Are Lots Of Contaminants In Milk

Dairy products contribute from one-fourth to one-half of most people's dietary intake of dioxins. "Dioxins" is a catchall word for any highly toxic compound produced as the result of some manufacturing processes. All of these toxins do not readily leave the body and can eventually build to harmful levels that may affect the immune, reproductive, and the central nervous systems, and have also been linked to cancer.

Other contaminants often introduced during processing of milk products include melamine, which is also found in plastics, and negatively affects the kidneys and urinary tract due to its high nitrogen content, and carcinogenic toxins including aflatoxins. When farmers treat cows for conditions such as mastitis, an inflammation of the mammary glands that's incredibly common because of the constant milking cows suffer, antibiotics are used — which means you also might be drinking those.

6. It Makes Your Skin Break Out

Dairy products and foods with a high glycemic index are the leading causes of acne, according to a review published in a 2013 issue of the Journal of the Academy of Nutrition and Dietetics. Researchers examined the link between acne and diet and have found that certain products, especially cow’s milk, produce and stimulate hormones linked with acne. This study supports previous findings from the Harvard School of Public Health and lots of other studies linking dairy and acne.

7. It Doubles The Risk Of Parkinson's Disease For Men

Another study conducted on 7,500 men showed that those who drank more than two glasses of milk a day were twice as likely to develop Parkinson's disease as those who didn't. Yikes. Researchers aren't sure why it increases the risk so dramatically — and only in men — but they think it has something to do with the pesticides present in milk.

Clearly, you're probably better off trying one of the many other milk alternatives out there. Many of these health risks apply to dairy consumption in general as well — not just milk — so if you want to do yourself, the environment, and those poor female cows a solid, it's certainly worth trying to cut back on your dairy consumption. Who knows, you might just feel a whole lot better. I know I did.