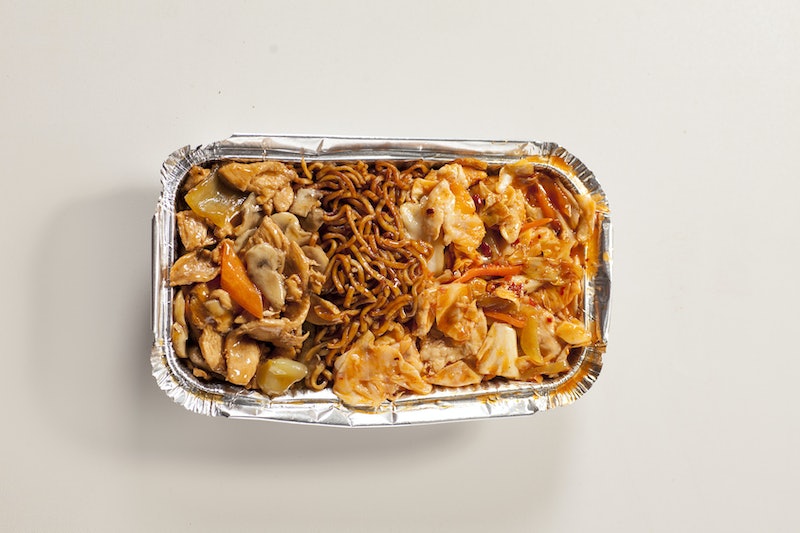 The hype surrounding Winter Storm Jonas has convinced you to hightail it to your closest Trader Joe's and stock up on peanut butter, frozen pizzas, and two-buck chuck, but that doesn't mean you're not going to be craving pad thai takeout once the snow actually begins to fall. Of course, that leads us to a very important question: what should you tip food delivery people during a blizzard? Should you even order delivery during bad weather in the first place? Sure, you feel bad asking some poor man or woman on a bike to make the trek to your apartment while Mother Nature is having her Elsa-style temper tantrum, but despite all your planning, sometimes grocery store snacks just don't cut it.

Whether or not you decide to hit up your fave food delivery apps during the midst of a blizzard is a moral matter I will let you settle for yourself. But should you decide that takeout is the only way to survive (and believe me, I hear you on that), at least be sure to tip the poor soul making the trek through the frozen wasteland that is your neighborhood. And, while you're not required to tip more than you normally would, it's a nice gesture, considering the small act of bravery this person displayed just to bring you your falafel. How much is enough? I reached out to popular food delivery service GrubHub to chime in on the matter. While there's no "official" etiquette, per se, on the proper way to tip during a storm, a GrubHub rep says that it is common to see tipping percentages go up:

If there is inclement weather, including winter storms, we usually see a high correlation with tipping percentages. When the temperatures goes down, tipping goes up. During the winter months, across the nation, we see the tipping spike to 14.1 percent, up from 13.9 percent. However, please keep in mind that our national tipping average does take into account warmer cities — such as warm Los Angeles and Miami.

It's nice to see that people's hungry hearts aren't so cold that they aren't willing to acknowledge the treachery of trudging through snow and ice and reflect that in their tips, but as GrubHub mentions, these numbers also take into consideration places that don't normally see extreme winters, which likely brings down the average. As The New Yorker reported following 2014's Polar Vortex (shudder), GrubHub Seamless found that bad weather tips varied by zip code in New York City during freezing temperatures, but rose as high as 24 percent in some neighborhoods. Adam Greenberg, a UC San Diego graduate student who helped author a study on the correlation between bad weather and tipping, told The New Yorker:

When the weather is bad, be a bit more generous by tipping 20 to 22 percent. If it's raining outside, tip 22 to 25 percent. If there's any snow accumulation, add a dollar or two on top of what you'd tip if it were raining.

My takeaway? Tip at least 20 percent, and if you can do more, you should. As an avid Seamless fan myself, I would say 25 percent to 30 percent sounds fair. If you're going to order delivery during a time when you yourself would not go outside, it's beyond important that you show your gratitude and appreciation for those who will.

However, as GrubHub points out, there are still a few other things to consider before you submit your order. For instance, in a statement to Bustle, it says that it's a good idea to check that the place you're ordering from is even open:

While the East Coast is being impacted by severe weather, GrubHub will be in close communication with restaurants in the affected areas. Restaurants will continue delivering food upon their discretion and some will amend their hours to ensure the safety of their employees. Our teams are working around the clock to ensure diners are presented with the most up-to-date information.

Also, keep in mind that it's likely going to take your food a bit longer to arrive than it normally would, depending on how bad conditions are outside. So, be patient, be generous, and make sure you have your phone on you while you wait. It's possible your delivery person might try to contact you during the trip over.

Or, you can do what I do, and just order a pizza (or two, or three) the night before, and throw it in the fridge to eat later. Leftovers are here to save your life, during bad weather and otherwise.

More like this
13 Summer Solstice Quotes To Celebrate The Longest Day Of The Year
By Sadie Trombetta
On TikTok, Orange Wine Is The Varietal Of The Summer
By Madeleine Aggeler
This TikTok Hard Seltzer Hack Involves A Milk Frother
By Alexis Morillo
Is The Insta-Famous Always Pan Actually Worth It?
By Jessica Goodman
Get Even More From Bustle — Sign Up For The Newsletter