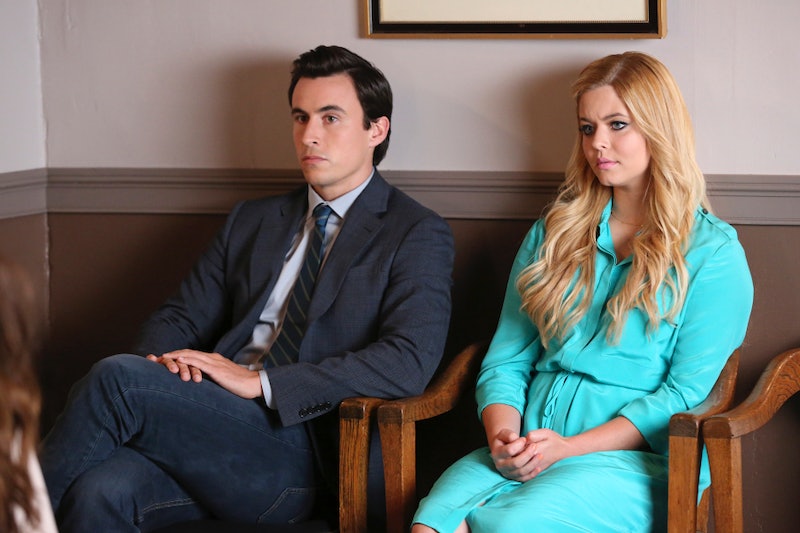 Asking someone to trust a character on Pretty Little Liars is almost as impossible as asking someone to eat just one M&M. It's practically impossible. And now that we have yet another murder mystery to solve, the suspect list is piled higher than ever. Some people think that Uber A is responsible for Charlotte's death, but I believe this new Big Bad and the killer are actually two separate entities. In fact, I think this villain emerges because of Charlotte's murder. So who exactly is Uber A on Pretty Little Liars ? That's a question I fear we'll be asking for quite some time. But thanks to a new PLL clue that's come out of the woodwork, I'm starting to wonder if Dr. Rollins is the Uber A (or "B," if you will) in question.

You see, while most of us were too busy focusing on Alison's "Mrs. Rollins" signature in the classroom flash forward scene, we neglected to notice what else was featured up on that blackboard of hers. Reddit user prettylittlecantab, however, made no such mistake and immediately recognized the quote was a passage from The Scarlet Letter : "Trusting no man as his friend, he could not recognise his enemy when the latter actually appeared."

The quote is in reference to the book's main antagonist, Roger Chillingworth, and basically means that this Big Bad would've been recognized a lot sooner had the protagonists not become suspicious of everyone out there — a sentiment most PLL fans can relate to. Just think of how paranoid this show has made us, so much so that we feel as though we can't trust any of the characters. And if you view everyone as your enemy, then it makes it that much easier for the real villain to stay hidden.

However, there could be more to this quote than meets the eye. In the book, Chillingworth seeks revenge for his wife, Hester Prynne's, infidelity after he finds that she's been branded with the scarlet "A" letter. Now, given the obvious A parallel, this could suggest that Uber A (Chillingworth) wants to exact vengeance for A's (Hester's) fate in pretty much the same way. "This Big Bad has an agenda," I. Marlene King shared with MTV News last October. "It’s to find out why this person passes away — and to seek revenge on the person responsible." So what makes me think that Dr. Rollins is our Chillingworth counterpart? Let's start with the fact that he (like Chillingworth) is a doctor and worked very closely alongside Charlotte during her road to recovery. Perhaps they grew closer than any of us realized... including Alison.

I mean, it can't be a coincidence that this quote is shown hovering right over Alison's shoulder. This show never does anything without a reason and may be a clue that Alison's new beau is Big Bad news. Maybe he decides to get close to Alison in order to figure out what happened to Charlotte. And let's not forget that King recently warned us in an interview with TVLine not to trust the Liars' new love interests. "Given the girls’ history with newcomers, it’s fair to say that they should be cautious," she teased. For all we know, she could've been talking about Rollins. He seems way too good to be true, after all, and since when has Alison ever had great luck with men? Just saying!