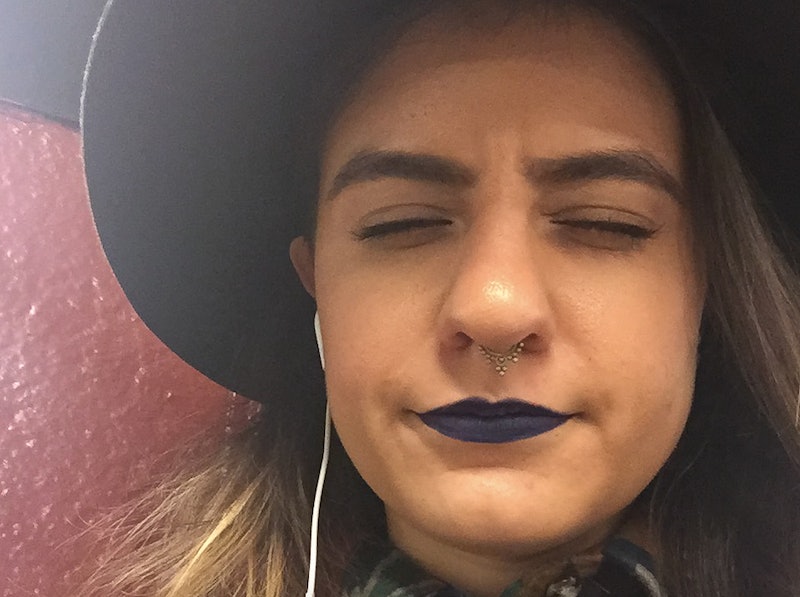 I had 20/20 vision most of my life, until six years ago when astigmatism presented in my left eye. Since my beauty blogger job requires a lot of close-up work and screen time, wearing glasses while doing any sort of work is the norm for me. Before this experiment, I'd never tried contacts. Instead, I often skip glasses altogether at night, whether I'm at home watching TV or out socializing. I don't drive much in NYC, so it's easy for me to get around with a little blurriness. In the daytime, I alternate between my decent sized collection of prescription glasses and sunnies.

My glasses prescription was working OK for a few hours, but then my eyes would get tired — and, of course, my overall vision is still blurred when not wearing them at all. I wanted more options!

Needing a prescription tune up, I stopped by the Manhattan Eye and Ear and Throat Hospital to let my optometrist and friend Marta Fabrykowski touch my eyeballs... and to try out contacts for the first time. We made sure my eyes were healthy before adjusting my prescription and measuring for trial contact lenses. A few days later, I came back to pick up my new lenses, learn how to use them, and go on my merry way, ready to give the contacts a try for a full seven days. Here's how it all went down.

I did not expect putting my contacts in at home to be so tricky. The fact that I have long, dragon lady nails probably didn't help. Since contact users are prone to a greater frequency of eye infections, OD's like Fabrykowski are all about the daily lenses which don't require the user to clean them. This lessens your chances of messing up hygienically, which I was all about.

If you're a first timer like me, your optometrist will show you how to take them in and out during that first appointment. There’s a few things you need to know before trying to prod these little cups onto your iris and pupil, like not using alcohol based sanitizers, which can eat away at the lenses. Yikes.

I took take it easy today and mostly watched TV — you know, for science — to see what this setup did to my tube vision. It was much better than usual, but my eyes were hurting from the million attempts at getting them out for the first time.

Since my astigmatism only affects one eye, I decided to dabble in only wearing a left contact for some of this experiment. The second day popping in an Acuvue into one eye was easier than the first. My right eye was certainly grateful that I wasn’t subjecting it to unnecessary torture. The discomfort I felt on the first day was greatly reduced, but my left eye spit the contact out — literally my upper lid chomped it like jaws and it was expelled — three separate times.

After the third time, I was tempted to give up my contacts-only quest, but my glasses were at the store getting upgraded with my new prescription. So, I try to focus on sending some emails, but my eyes were so irritated from putting the contact back in I just couldn't deal.

This was a day where I really was about to put contacts to the test: Today I was cutting hair and reading off a teleprompter. Those two activities are semi-regular for me and provide the chance for the lenses to perform both up close and farther away.

Alas, 'twas a big fat nope, as my eyes hated these particular lenses. I thought they would be more comfortable because they felt pretty soft, but they never quite settled. I even thought I had them in the wrong eye and/or inside out so I opened up a fresh pack and tried again. Same nope. I was able to cut hair despite blurry-ish vision that I feared I was too used to.

By the end of the day I felt so out of it from cloudy vision that I just yanked out the left one (the right had fallen out hours ago) and did the teleprompter read sans vision enhancement. My eyesight isn’t so horrible that I couldn't read, but to be quick, clear, and efficient, I usually rely on my glasses. These ones let me down real hard. Maybe tomorrow’s left eye only experiment will be better.

Today I did something that I used to hate until I discovered my need for glasses: going to the movies. I went to see Star Wars: The Force Awakens (for the second time), and it was one of those days where I wanted to reach for my glasses for lazy comfort. Because I typically wear my glasses while working from home in my sweats, they feel like a comfy hoodie, and wearing them out to run errands always felt like a way to go incognito about the streets. Without my glasses, I was lacking that comfort. Plus, my eyes spat out the contact lenses about halfway through the movie, so I couldn't see the screen as clearly as I would have liked. Safe to say, I am not sold on contacts as a viable substitute for glasses.

Day 6: Dailies Aquacomfort Plus In Both Eyes

By this point, I was finally getting the hang of putting these babies in — and I think I found a brand my eyeballs wouldn't reject. Dailies are 69 percent water, about 10 percent more than most other brands. Dailies have a printed indicator to let you know you’re putting them on correctly, so this takes out some of the guesswork. Since I can actually see out of these lenses, this was the first day I actually felt I was able to operate better than when I would wear my glasses. Thursday was a major cleaning day at my house, and though I was able to find every single piece of dust to attack with my vacuum, I didn’t have protection from errant dirt that I get wearing my glasses while tearing it up.

I wore them to shower, to put on a full face of makeup, and get all cutesy cute to check out the new Urban Decay x Gwen Stefani collab. For once since Monday I didn’t feel disoriented while outside at night, I wandered without that “off” feeling I’d been dealing with while trying the other contacts. I even read on the train! I was starting to feel more optimistic about my future as a contacts wearer... even though I still find taking them out pretty tricky.

Today I had an epic sew-a-thon, made all the simpler by being able to pop the daily lens into my one eye and be done with it. On day five, I started to understand the appeal of contacts over glasses. No smooshing them back up to the bridge of my nose 12 times an hour, no more breakouts if I forget to clean them every day, no headaches from them sitting on my face during a long workday. Project after project, I was able to see more clearly. The drawback remains that my eyes are drying out much faster than I ever thought possible. I ended up buying some BS 17 dollar eyedrops that only work if I use them every hour like crappy lip balm. However, I don't think I blame this on the contacts as much as my mega dry apartment.

Day 6: Acuvue Both Eyes, The Dailies Both Eyes

Annnnd we're back to stage nope. Within an hour my eyes spit out both Acuvue contacts and sang a happy song while I fished the goopy folded lens out of my venus fly trap lashes. I switched back to the Dailies today so I could keep on reupholstering chairs, my Sunday project.

At this point, I could put these babies in my left eye in about five seconds, but the right eye is harder. It almost feels like a waste to even put a contact in there... and maybe it is. Within minutes, again, it got chomped out by my eyelid. I continued on with the rest of my day thinking the left one was in, but at some unknown point, it too had popped out. Rejection!

Today I reached out to my optometrist to tell her I'm going with the Dailies, and I went shopping on 1-800-Contacts. The futility of putting the contacts in both eyes settled upon me as I ordered. Why would I pay my hard earned dollars to wear a lens in my right eye unless strictly necessary? I’d rather have the cash than annoy my right eye for no good reason.

Today should have been smooth sailing, but felt like combing the desert. The contact stayed in after a long day of typing and reading, but it burned like heck. I later discovered a hair on the lens when I took it out, so I guess that means it's important to remove and clean if things get too uncomfortable instead of just ignoring it. In fact just one small lower lash can make wearing the lens pointless, I couldn’t see most of the day and now know that human error: Another part of learning the contact lens tango.

Will I Ever Be A Contacts-Only Woman?

Even though this experiment wasn't free of painful trial and error, I’m excited to keep going with my left-eye-only method to hopefully get my correct vision on around the clock. I'm pretty over the partially impaired "dealing with it" thing that I do when I’m trying to be fashionable by not wearing glasses, which is dumb. I think because I accessorize heavily, people assume my glasses are fake, and it’s one more annoying appearance related question I’m tired of from strangers. So, I'm happy I finally tried contacts. Once I started to get the hang of it, it was just so much easier to wash my hands and stick in a lens in the morning than pushing my frames up my nose all day. Being able to wear cheapie, non-prescription sunglasses again is another huge perk. Though they cost roughly 75 cents per day, per eye, contacts can be really convenient if you need pristine vision in your waking hours.

If you're considering making the switch to contacts, just know that it'll be a lot of trial and error. You'll probably have to test out a couple brands before you find the ones that work for your eyes. They'll probably fall out a bunch at first. You'll experience the unique pain that is having a tiny hair stuck behind your lense. But, in the end, I think it's worth it.

More like this
M.A.C. Cosmetics’ Newest Collection Celebrates Whitney Houston's Legacy
By Audrey Noble
12 Party Makeup Looks That Are Perfect For The Holidays
By Jessica Willingham and Olivia Rose Ferreiro
8 Nail Art Trends That Will Be Everywhere In 2023
By Jordan Murray
Selena Gomez’s Rainbow Nails Added A Perfect Pop To An All-Black ’Fit
By Audrey Noble
Get Even More From Bustle — Sign Up For The Newsletter