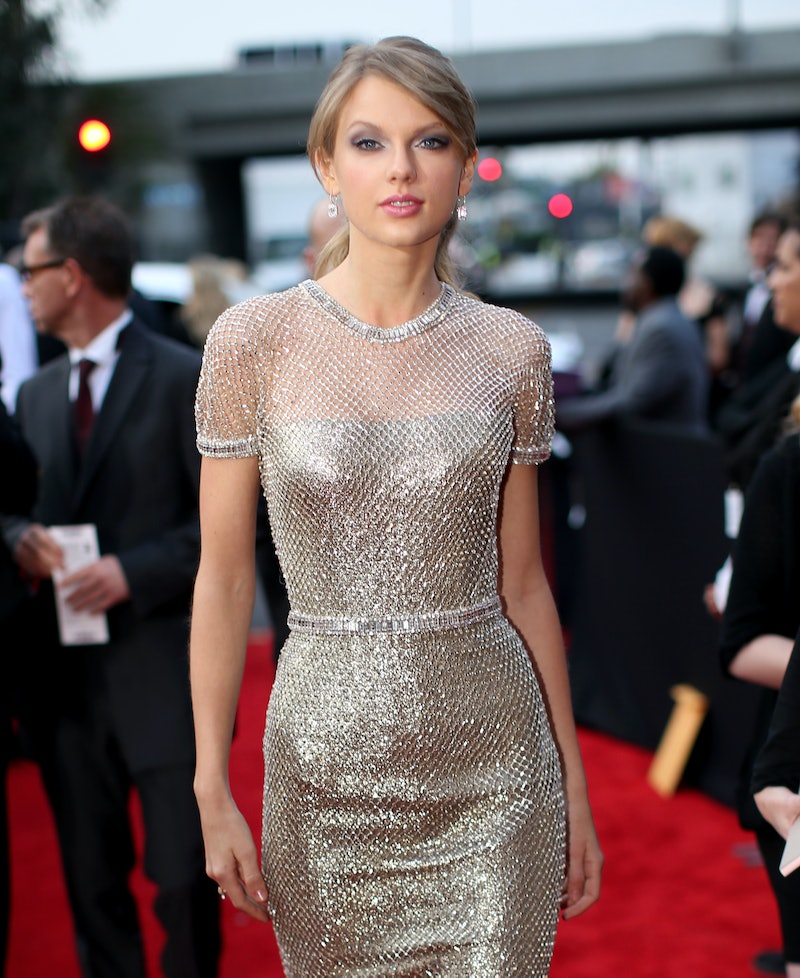 Chances are, if you're a female celebrity between the ages of 15 and 30, you're best friends with Taylor Swift. The singer, as shown through interviews and Instagrams, has a loooong list of close friends, having buddied up to everyone from Lena Dunham to Emma Stone over the years. Yet one person Swift probably won't be hanging out with anytime soon? Jennifer Lawrence, who, despite also being a young, well-liked celebrity, is as different from Swift as can be — and judging from their red carpet interactions, at least, it seems the singer is intent to keep Lawrence far, far away from her inner circle.

During a 2014 Grammys red carpet interview with Ryan Seacrest, Swift was shown footage of her Golden Globe run-in with Jennifer Lawrence, in which Lawrence photo-bombed her mid-interview. Swift's reaction to the footage was amused, at best; watching Lawrence excitedly explain the photobomb to a reporter, Swift's expression was less "she's so funny!" and more "she's so loud."

Swift's reaction makes sense; Lawrence is known for her kooky, loud-mouthed word vomits, the polar opposite of Swift's classy, carefully cultivated sentences. It's hard to imagine the two of them being close friends, sharing secrets and having girls' nights. The awkwardness between the two stars first became evident at the Globes, when Lawrence interrupted Swift's interview after creating the meme seen round the world. When Lawrence approached, she joked, in typical Lawrence fashion, that she wanted to push Swift down the stairs, saying "I was like, 'She'll crack up. She would really love that.'" Swift didn't seem to be as enthusiastic about the idea, though, giving a tight smile and saying "that's so funny." Subtext: She did not find it funny.

Seacrest, either not noticing the awkwardness or smartly capitalizing on it, then asked Lawrence if she'd ever gone to a Swift concert. Lawrence exclaimed, "She's never invited me!" and, although Swift insisted she had, it seemed more like a save than a fact. The awkwardness continued when Lawrence professed her love for Swift's music, saying that she "freaked out" over the CMAs" and sent Swift "a text message that was like six inches long." Swift's response? "I don't remember [what it said]."

Ouch. Sure, Swift did say that when she saw Lawrence's nominated film, American Hustle, she "wanted badly to send a novel text message," but unlike Lawrence, the singer apparently wasn't moved enough to follow through. It seems Swift, much to our shock, is perhaps the only person in the world who isn't dying to be best friends with Lawrence. We're probably more upset about it than Lawrence is; the actress has said that she prefers to hang out with non-celebrities, anyway. Still, could you imagine a friendship between Swift and Lawrence, two of the world's most beloved — and talked-about — female celebrities? It might just break the Internet.