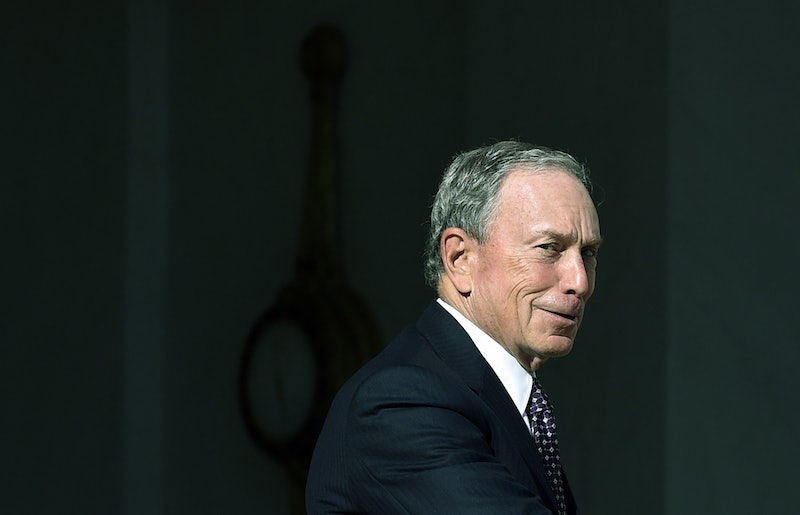 Former New York City Mayor Michael Bloomberg is considering a 2016 presidential run on a third-party ticket — a possibility that could radically shake-up the current political theater unfolding on both sides of the aisle. According to a New York Times report, the one-time Republican would run as an independent, and has already asked his political advisers to create plans for his campaign. Where does Bloomberg, who switched from Republican to independent during his tenure as New York City mayor, stand on women's issues, and how would his policies stand up to the likes of Hillary Clinton, Sen. Bernie Sanders (D-Vt.) and Republican front-runner Donald Trump? While he would be the more feminist choice than the Donald, Michael Bloomberg may need to change some of his women's rights policies if he wants to win over female voters.

Bloomberg has long been known to be progressive on so-called social issues, and has even taken the lead on some issues in direct opposition of the modern-day Republican party, including gun control. While mayor of New York City, Bloomberg co-founded Mayors Against Illegal Guns with then-Boston mayor Thomas Menino. The gun-control coalition eventually merged with Moms Demand Action for Gun Sense in America, and renamed itself Everytown for Gun Safety.

But gun control — which is often considered a feminist issue — is not the only issue where Bloomberg aligns well with progressive candidates like Sanders and Clinton. Bloomberg is staunchly pro-choice, and has called "reproductive choice...a fundamental human right."

"We can never take it for granted," the former New York City mayor has said. "On this issue, you’re either with us or against us."

In 2014, Bloomberg — who's one of the richest people in America — put his money where his mouth is, donating $2 million to Women Vote!, a super PAC ran by the pro-women political group Emily's List. The organization works on getting pro-choice Democratic women elected into legislative office.

Bloomberg also expressed his support for abortion access in a 2012 editorial, published on Bloomberg View, on why he was voting for President Obama over Mitt Romney:

When I step into the voting booth, I think about the world I want to leave my two daughters, and the values that are required to guide us there. The two parties’ nominees for president offer different visions of where they want to lead America.

One believes a woman’s right to choose should be protected for future generations; one does not. That difference, given the likelihood of Supreme Court vacancies, weighs heavily on my decision.

But would Bloomberg support repealing the Hyde Amendment, which bars federal Medicaid funding from covering abortion procedures for low-income women? It's hard to say if Bloomberg would join Democratic candidates Clinton and Sanders on efforts to repeal Hyde, but considering Bloomberg's strong pro-choice stance and protection of abortion access in the past — New York is also a state that allows its own state Medicaid funding to go towards abortion procedures — it seems likely that the former mayor may run on a repeal-Hyde platform.

Yet Bloomberg's policies are not as pro-women as they could be. In 2013, Bloomberg vetoed a bill that mandated paid sick leave for workers employed at businesses with more than 20 employees. Bloomberg's veto was eventually overrode by the New York City Council. His initial veto, however, was a big blow to women, who overwhelmingly benefit from paid sick leave and other family-oriented workplace policies.

Bloomberg also sparked some controversy with his 2012 breastfeeding initiative, which encouraged new mothers to breastfeed their children instead of using breast-milk alternatives such as formula. The "Latch on NYC" initiative removed pamphlets and other information on breast-milk alternatives from most New York City hospitals in an effort to promote breastfeeding. But as many women pointed out at the time, it should be a woman's choice to breastfeed or use formula, and some new mothers may not be able to breastfeed at all. In the end, Bloomberg's misguidedly feminist initiative ended up being, well, not very feminist.

When it comes to reproductive justice, Bloomberg's policies put him on top, but the former New York City mayor still has a ways to go if he wants to be considered a pro-women candidate. Perhaps Bloomberg should start by acknowledging that "choice" is not just tied to reproductive rights, but to all aspect of women's lives.