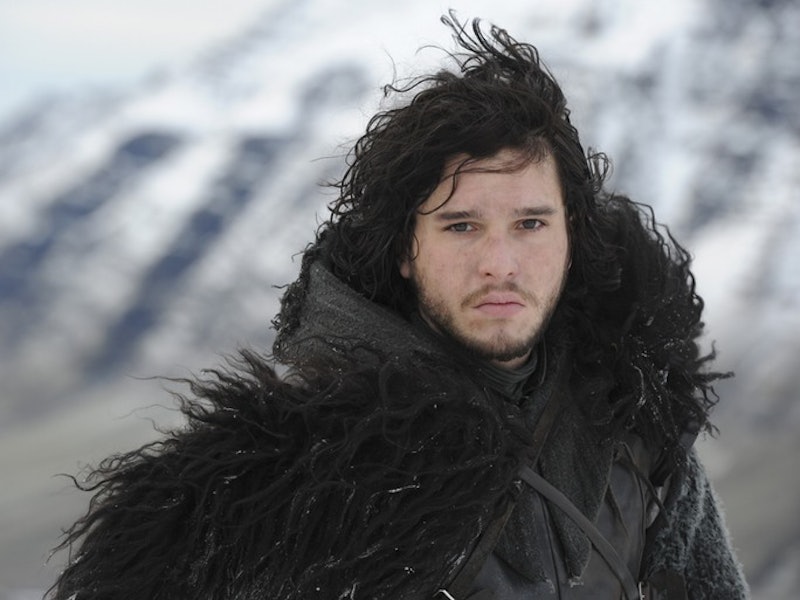 I am pretty sure we can all agree that some way, somehow, Jon Snow is going to survive his brutal Season 5 stabbing to live a prosperous and happy life in the sixth season of Game of Thrones. Well, not exactly a happy life — this is Game of Thrones after all — but in Westeros, if you are still alive, then you are doing better than most of the other characters. While I am ecstatic that everyone's favorite bastard will live to fight another day, I can't help but wonder, though: What would Game of Thrones be like with Jon Snow dead?

I feel like mentally preparing for Jon Snow's death is a good idea. While all signs point to Jon being poised to return for Season 6 (whether he died during the stabbing or not — he could be resurrected, after all), he's known for his poor decision-making skills — and this probably won't be his only brush with death in the near future. Ygritte hit the nail on the head when she said Jon Snow was stupid but brave. And you know what happens to stupid and brave people? They usually end up dead. Just look at Oberyn Martell, Robb Stark, or even Ned Stark: Brave men don't have a habit of doing well on Game of Thrones.

Because Jon Snow's death is an inevitable event at some point — whether in the near future or far future — I have allowed my mind to wander. Here's what Game of Thrones would be like if Jon Snow was truly dead forever:

It Would Be The Saddest Thing Ever

Not gonna lie: I cried a lot when it seemed like Jon Snow had died for good. Like, Catelyn Stark's Red Wedding reaction ain't got nothing on me. If Jon Snow had really died, my sadness would hang over Season 6 like the Greyscale plague. Colors would be less colorful, Tyrion would be less funny, and Jon-less Westeros would be the saddest place ever.

He Would Never Get To See Winter Come To King's Landing

We've been prepping for Winter's arrival since the series's very first episode. For Jon Snow to die before winter arrives would seem like a waste. Poor Jon Snow is always getting the short end of the stick.

Arya Would Be The Only One Seeking Revenge

First Robb Stark said he was going to avenge his family's honor, then Jon took up the banner. If Jon were truly dead, that would leave only Arya to fight the good fight. Yes, there's Sansa and the brothers Bran and Rickon, but those three aren't quite up to the task just yet. While I applaud the chance to see Arya kick even more butt on-screen, that seems like an awful lot to put on the shoulders of a teenage girl. With Jon Snow dead, things would be even tougher for Arya.

We'd Never Find Out Who His Parents Are

There a some mysteries that have haunted the human race since the dawn of time. Like: What happened to the dinosaurs? How do magnets work? And lastly, who are Jon Snow's parents? With Jon Snow, this would probably never be answered. Thank God, Jon Snow is probably not dead.

Westeros Would Be A Lot Less Sexy

I love Jon Snow for many reasons, but mainly I adore that, no matter the situation he finds himself in, Jon Snow's hair is always on fleek. I cannot imagine a world where his curly head didn't grace my television screen on a weekly basis.

There are a lot of contenders for the Iron Throne and the dark horse in the race is easily Jon Snow. His death would even further narrow the number of possible throne successors. Like the race for 2016 Presidential Republican nomination, the more candidates the merrier in my opinion. #JonSnowForTheIronThrone2016

Jon Snow spent most of the fifth season trying to broker peace between the Night's Watch and the Wildings. With Jon Snow out of the way, these two groups would simply fight each other into oblivion. This would spell major trouble for everyone, because with those two fighting, there would be no one to watch as the White Walkers make their way towards Westeros.

What Would Happen To Sam?

With Jon by his side, Samwell Tarly went from a cowardly bookworm to a ladies man with a heart of gold. I simply cannot imagine what would happen to Sam without Jon. It would be like a PB&J sandwich without the peanut butter, and by that, I mean it would be very pathetic.

By the grace of George R. R. Martin, Jon Snow better be back during Season 6 — I like most fans, would be eternally grateful.