If you've been on Facebook in the past month, you've probably come across the latest Internet obsession, the "Be Like Bill" meme. A simple stick figure, most often seen on a computer or wearing a simple winter hat, Be Like Bill serves as a reminder of just how obnoxious our social media practices truly are, with the added note that we should probably stop. Bill's message: try to be more like him, and shut down all of your Candy Crush invites, while resisting your baseless urge to over-share all of your latest vacation photos. The irony in all of this? Bill has become the most annoying, overly-shared meme currently on the Internet.

So where did Mr. Judgy come from in the first place? According to Know Your Meme, Bill's origins aren't exactly definite, but we do know he popped up on the scene around October 2015, appearing on forum sites like Reddit, and Funnyjunk. Eugeniu Croitoru, a man from Moldova currently living in Milan, Italy, claims to have created the meme as a passive aggressive jab at the overly opinionated, serial sharers on social media. Croitoru has also started a Facebook page for Bill, which currently has 1.5 million likes.

And Bill's online reach is only growing. Along with his own memes, Bill has a female counterpart known as Emily, who is also "smart" and declines posting gym selfies, or too many pictures with her boyfriend. Bill's even got friends like Jose, a Spanish language complement who's ready to police your posts in another language. 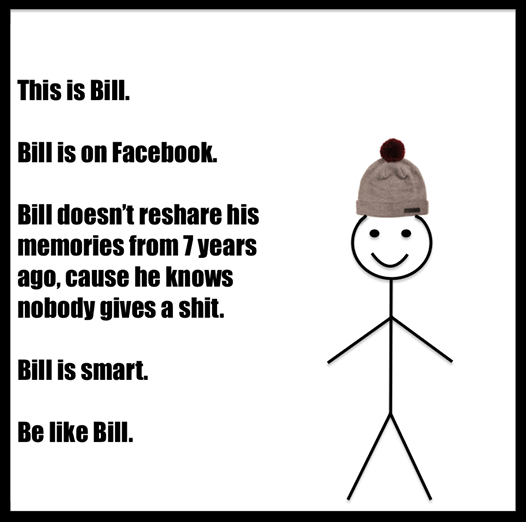 For what it's worth, Bill does have a point. There's no greater social media nuisance than that one friend who feels the need to chronicle every aspect of their lives, no matter how dull. But isn't that what social media is about in the first place? The ability to share our meaningless proceedings for the sake of connections and the strange need to be validated by the Internet?

But just when you were starting to feel good about the 50 likes you got for last night's dessert, here comes Bill to tell you that you're not being smart by falling into the traps social media platforms deliberately laid out for us. Well, I hate to break it to you Bill, but the exact forum that you're policing is the same forum with which you're being shared. And at the rate you've been popping up, it's likely that your words of wisdom will soon become what you've decried this whole time: an annoying post.