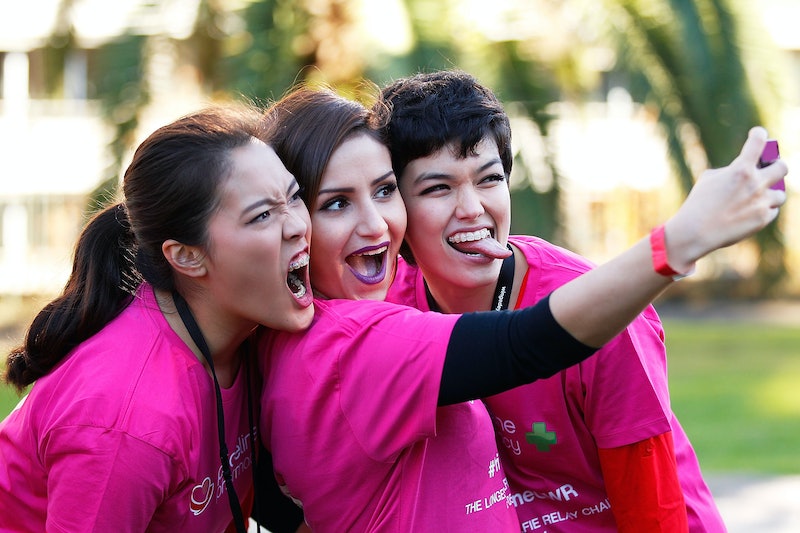 New research released by Albright College finds that couples who post their every cutesy-wutesy move on social media share a certain personality trait (besides being annoying). They also score very high on what is called relationship contingency self-esteem, which means that their self-esteem tends to rise and fall depending on the fluctuations of their relationship. It makes sense: Those who depend on their relationship for validation will also seek that validation from social media.

Ironically, the research also found it's introverts — not extroverts — who are most likely to post about their current relationship on social media. (Though extroverts are likely to have more "friends" or "followers," naturally.)

We all know that social sharing has its socially acceptable limits. And we all know who the worst oversharing offenders on our feed are. But what does each type of overshare reveal about the Facebook or Instagram poster?

I chatted with a few clinical psychologists about all the people you love to hate on social media and what their adorable tics says about their inner worlds, Freud-ly speaking. Here are seven types of oversharers — and their potentially deep-rooted motivations. Get ready to take your judgment of them to new heights.

Everyone has a few of these wince-worthy friends on their newsfeeds. There’s the girl who caught her boyfriend cheating and wants us to know every gross and grisly detail. There’s the guy who suffered a horrible accident, but somehow found the time to immediately post an Instagram selfie from his hospital bed. Then there's . . . this.

Dr. Joseph Cilona, a Manhattan-based clinical psychologist and star of the new show Married At First Sight , says behavior like this is often indicative of someone who suffers from impulse control. These folks, he tells Bustle, often do an overall poor job of managing their emotions and have a “limited insight into [their] self and others.” (Which might be why they often find themselves in dire straits while the rest of us are left shaking our heads over our breakfast cereal the next morning.)

Enough already with how Bobby handcrafted an engagement ring made from the diamonds he mined himself in South Africa. Haven't we all suffered enough?

“These individuals are likely to associate their self-worth and self-image with their romantic and social relationships,” Dr. Cilona says. “Their identity as a member of a couple might also be very central to their identity as person, or even more prominent in some cases.”

Before you hate too hard, remember that the study out of Albright College found that most of these couples are actually indeed happy. That said, these updates can "create a self-perception of more happiness and contentment … whether that actually exists or not," confirms Dr. Cilona.

This guy always seems to be jetting off to Bali or getting a hefty promotion and being awarded Most Talented Person On Earth. He’s probably hidden from your feed, but if not, be comforted by the fact that the bragger probably “suffers from poor self image.”

People who are constantly puffing themselves up on social media have “low self-confidence, and an excessive need for approval, validation, and recognition,” Dr. Cilona says.

The selfie addict posts so many boob-tastic selfies you could pick her cleavage out of a lineup. When drifting off to sleep at night you find yourself lulled into dreamland by the ripples of Jeff’s rock hard abs.

This one isn't so hard to understand. Narcissism, says Dr. Larry Rosen, author of iDisorder: Understanding Our Obsession With Technology and Overcoming its Hold On Us, runs rampant on social media. "In one study, we found that those who use Facebook [and post] more and have more Facebook friends show more signs of narcissistic personality disorder," Rosen tells Bustle.

Say you just started dating someone and they friend you on Facebook. Normal, right? Until you find yourself breezing through their timeline . . . every day. Things get super weird when you start doing exhaustive research on every person of the opposite sex on their timeline. Suddenly, you're suspicious. Very, very suspicious. Who is this person?

This is indicative of an “anxious” relationship style, writes Dr. Jesse Fox, an assistant professor at Ohio State University School of Communication. People with anxious relationship styles are often insecure and possessive in their relationships. While this type may very well have trust and intimacy issues, using social media as a way to affirm your innate suspicions may spell the end to your relationship, she cautions.

“It’s important to keep in mind,” Fox writes, “that for every person who caught a significant other cheating on Facebook, there are probably 100 other instances where partners fought about or got unnecessarily jealous over nothing.”

This is the guy or gal whose own newsfeed is a gust of tumbleweeds, but always seems to provide an endless supply of likes and comments. This person is most likely “shy and sensitive” says Dr. Cilona. “This kind of behavior can be associated with marked emotional sensitivity … [these people] are very attentive to and remember the information they encounter online.” Aww.

Everyone has a friend or 20 who posts endless pictures of warm cronuts, glistening pizzas, and anything with ranch dressing. But why?

"Posting decadent, unhealthy, and indulgent foods can be an attempt to alleviate guilt," says Dr. Cilona, who adds that these people want others to "relate, identify, or condone."