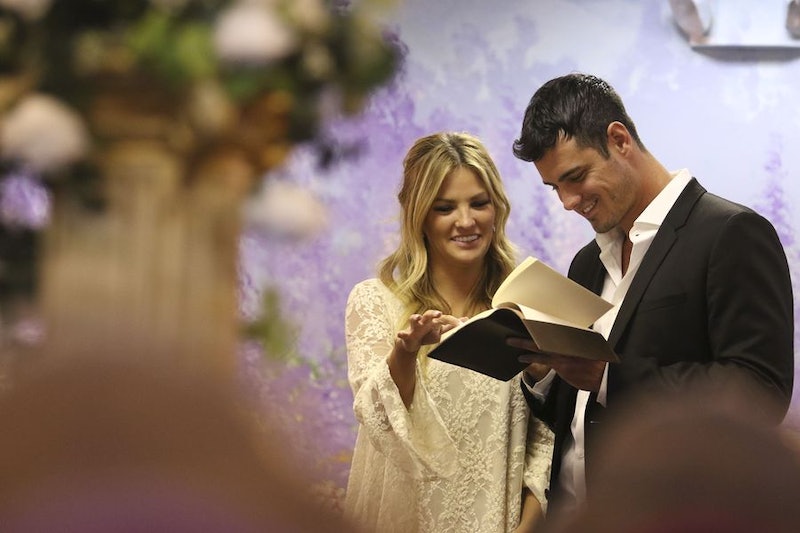 The women of Ben Higgins' season of The Bachelor may not have been too thrilled to see Becca Tilley walk into the hallowed Bachelor mansion doors on night one, but I definitely was. Ever since she became Chris Soules' runner up — and TBH, should have been his first choice — last season, I've really loved Becca. Whereas contestants on The Bachelor tend to let the experience of sharing a guy with two dozen other women get to them, Becca always remains calm, cool, and collected, and the fact that she's so low key is really refreshing amid the drama all around her. So, what has Becca been doing since The Bachelor wrapped this season? It looks like she's been pretty busy since finishing her second lap!

In fact, since leaving The Bachelor, Becca has been keeping her followers updated on Instagram and Twitter, and if you aren't already following her, you need to be. Her posts are usually funny and really relatable, especially if you are obsessed with Grey's Anatomy like Becca is (and that totally applies to me, too).

Here's what she's been doing since The Bachelor finished filming. And, if these posts leave you wishing she was your BFF, don't worry — I feel the same exact way.

She's Been Live Tweeting The Bachelor

And, that includes defending herself and her actions, like when she explained how she got caught up in the whole Jubilee hating party the contestants threw after they caught her giving Ben a massage at the cocktail party. If you're interested in what goes on behind the scenes, Becca's always filling her followers in — photos and videos included.

And By Videos, I Mean This

Does anyone else suddenly want to become a Bachelor contestant, not for the guy but for the moments like this?

As if this girl wasn't lucky enough to have a shot at marrying Ben?! And yes, that is her sister, and yes, their entire family really is that beautiful.

She Went To Tahoe

And, she managed to pull off one of those beautiful blanket scarves flawlessly. How pretty is all that snow?! You know, if you didn't get buried in it yourself this winter.

She's Been Freaking Out About Grey's Anatomy

Same, Becca. What is the deal?! Hasn't Meredith been through enough?! When the show comes back in February, my hope is that she live tweets Grey's Anatomy like she does The Bachelor.. I need to know what she thinks!

She's Buddying Up With Her Fellow Contestants

Just like Becca left The Bachelor round one with lifelong BFFs in Whitney Bischoff, Kaitlyn Bristowe, and Ashley Iaconetti, it looks like she's made fast friends with this season's JoJo Fletcher. Actually, from everything we know about JoJo so far, it makes total sense that they'd be friends!

Her Car Got Broken Into

And, She's Been Super Concerned About Quicksand

But, honestly, who isn't?

Dear Becca, please never change. And, um, what are the chances we'll see you in Paradise this summer? If she doesn't end up with Ben, BiP needs to happen!