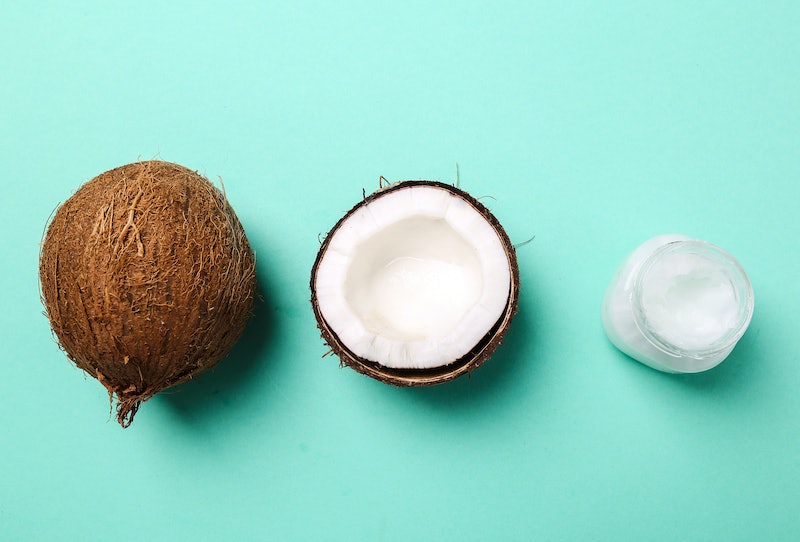 In my book, coconut oil is one of those few health products out there that actually lives up to its hype. Sure, it's still annoyingly referred to as a "superfood," but there are quite a few reasons so many people are singing its praises today. When eaten, it can speed up the metabolism, boost the immune system, and even out your bowel movements. But that's just the start. You can have a little jar of coconut oil throughout the house for external uses, and each of them would have its use, from moisturizing the skin to treating chafing.

A study performed on an indigenous Sri Lankan population called the Veddas showed us how fascinating the connection is between coconut oil and robust health. Two-hundred and seven Veddas were followed; 39 percent of them were regular smokers, yet only 3.8 percent had high blood pressure in their adult years. Out of the whole community, not one person was diagnosed with heart disease. Each Vedda on average consumes 120 coconuts a year, and the rest of their diet only consists of fruits, yams, and game they hunt. The majority of the fat they get from food comes from the coconuts, as they don't get the chance to eat that much meat. Experts believe their lack of heart disease is directly linked to all the good fats from the coconuts.

Even if coconut oil isn't exalted as a champion miracle food by every doctor in the world today, there is certainly enough evidence for us to know that it's good for you — in many different ways. If you choose to give coconut oil a chance, though, don't succumb to the refined products just because they're cheaper or packaged prettier. It makes a big difference if you choose a product that is organic, raw, and cold-pressed. Even better if you can get your hands on something that's fair trade and least-labor intensive.

Here are eight reasons you should add coconut oil into your health routine.

1. It's One Of The Best Sources Of Good Fat

Hopefully we've all realized by now that consuming fats is part of a nutritional diet, and our bodies need them to thrive. Before you run for a serving of French fries, though, remember that it matters what kind of fat we're talking about here. The natural saturated fat found in coconut oil is definitely the good kind, and it may even be the best option we've got.

It's a rich source of medium-chain fatty acids (MCTs), which your liver quickly burns for energy without resulting in a dangerous rise of insulin. Instead of just sitting in your system idly, MCTs boost your metabolism and encourage your body to burn fat — the kind you don't want, that is. Studies have shown that the regular consumption of the MCTs found in organic, raw coconut oil can also make you lean, as well as improve your athletic performance.

2. It's Good For Your Heart

All-natural coconut oil contains two powerhouse antioxidants called flavonoids and polyphenols, both of which are known to keep your heart happy by reducing inflammation in the body and decreasing the levels of oxidative stress. The unsaturated fats also act as little warriors that fight off mean cholesterol (LDL) while boosting the nice cholesterol (HDL). They also prevent blood from coagulating, resulting in better flow through the arteries around the heart.

Combined, these incredible benefits point to reduced risk for heart disease over time. While there no hard scientific evidence to prove this, experts claim it's not so far-fetched to believe that there is a direct correlation between balanced diet that includes coconut oil and a strong heart.

Naturally, coconut oil is antimicrobial, meaning it's good at warding off bacteria and fungi in your body. This prevents digestive problems from worsening, and it even soothes irritable bowel syndrome. These antimicrobial properties also make it easier for your system to absorb all the vitamins and minerals it needs, which will help your bowel movements become more regular.

4. It Boosts Your Immune System

Lauric acid is one of the star medium-chain fatty acids (MCTs) in coconut oil, and it's both antiviral and antibacterial. It's utilized to treat all kinds of ailments, including the flu, bronchitis, and parasites. What it's especially known for is its ability to strengthen the immune system. The body turns lauric acid into something called monolaurin, which beefs up the body to fight illnesses and viruses.

5. It Can Help Treat Yeast Infections

Some of the most powerful natural ingredients that fight yeast infections are lauric acid and caprylic acid, both of which are found in coconut oil. Applied directly to the vagina or eaten, coconut oil can kill the bacteria that comes along with a yeast infection and tend to common symptoms, such as itchiness and irritation. The antimicrobial effects discussed above can also kill candida (the fungus that causes yeast infections) in the digestive tract before it goes any further, decreasing your risk of even contracting one in the first place.

That said, coconut oil should only be used alongside whatever primary treatment you've been given by your OBGYN. As always, speak to your doctor before deciding anything for yourself. If they don't have much experience with patients who are interested in using holistic treatments like coconut oil for a yeast infection, ask around until you find a medical professional who does.

6. It's A Healthier Way To Fry & Bake Things

You can fry eggs in coconut oil just as easily as you can make crispy sweet potato fries or bake brownies with it. I even spread it on toast in the morning sometimes instead of butter. It's an incredibly versatile ingredient that can be used for just about any dish, meaning there are endless ways to get all those benefits without sacrificing taste.

Skeptical about it? I get it. I was too when I first started flirting with the idea of using coconut oil in my daily routine. Round up a few low-key recipes first, such as fluffy muffins or a stir-fry. It's unlikely that the taste of coconut will overpower your taste buds, and you can slowly get used to substituting it for butter and other oils. Eventually, you'll be a pro at tossing it in just about anything you create in the kitchen.

Having a big jar of coconut oil around the house definitely won't go to waste. You can use it in your hair as a conditioner or an anti-frizz product. It's also fantastic as a face moisturizer — I think it makes the perfect night creme and makeup remover; it makes a mean lip balm as well, and it can even protect you from the sun. Then, there are the oddball benefits, like how it can prevent chafing.

Just make sure you're separating the coconut oil you're consuming and the one you're using on your body into two separate places. Also, be cautious in general that your DIY products are being made the right way. You could be facing nasty infections if you're careless about the creation process.

8. It Gives You More Money To Spend On Other Healthy Things

If you look in the right places, coconut oil won't break your bank. There are some incredible deals on big jars of the raw, cold-pressed, organic products, which will save you a significant amount compared to what you would pay at the corner market for a little container of it. Expeller-pressed coconut oil is good for 18 months, and other virgin coconut oils are good for two years, so you don't need to worry about going through it so quickly.

More like this
Kim Kardashian On The Beauty Hack That “Changed My Life, My Skin, My Confidence”
By Taylor Jean Stephan
TikTok's "Damp" Lifestyle Is All About Mindful Drinking
By Carolyn Steber
Try These 3 Manifestation Rituals To Feel Healthier Than Ever
By Brittany Beringer
11 Health & Wellness Gifts Any Fitness Devotee Will Appreciate
By Rachel Lapidos
Get Even More From Bustle — Sign Up For The Newsletter