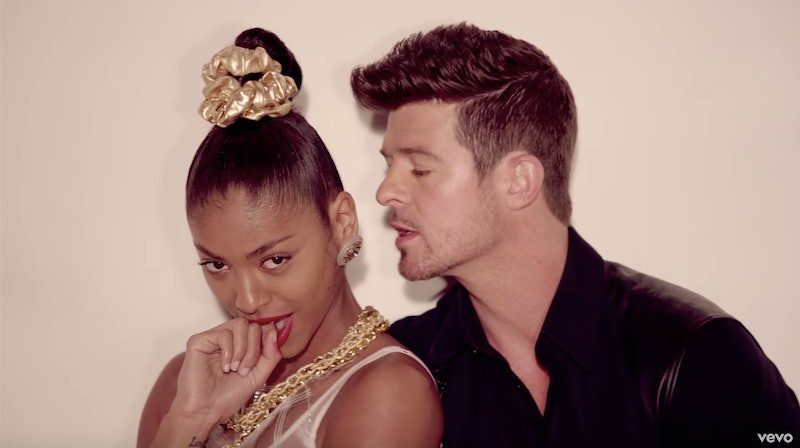 Sometimes when you're too busy dancing to a catchy beat, you tend to lose sight of what is actually being said in a song. And, more times than is socially acceptable, those lyrics might actually be holding some pretty misogynistic messages — from artists where it may be expected... or maybe not so much. While, yes, it is possible to be a feminist and still listen to music with misogynistic messages, can an artist's celebrity status and success ever really be an excuse for promoting misogynistic messages? Not in my book. But, nevertheless, that hasn't stopped the production of songs that cross that line.

But what actually makes a song misogynistic? Well, it could be a number of different things. It could be just the way a few of the lyrics are worded, the overall topic that the song is focused around, or even the title of the song itself. Basically, if a song is talking about women as merely sexual objects, glorifying the ideas of nonconsent, or shaming a woman for her own sexuality, then it can be put under the category of general misogyny. And here are just a few songs that hold hidden (or not so hidden) misogynistic messages — whether the artists actually knew that's what their lyrics were hinting at or not.

In 2013, Robin Thicke dominated the No. 1 spot on the iTunes with his hit song "Blurred Lines." However, as fun as the song was to dance to, lyrics such as "Okay, now he was close / Tried to domesticate ya / But you're an animal / Baby, it's in your nature" and more starting to spark a controversy on whether or not the song was actually promoting nonconsent. While Thicke did respond to the claims about the song, calling them "ridiculous" and saying, "Even very good girls have a little bad side. You just have to know how to pull it out of them," the lyrics and video remain questionable, at the very least.

While Jay-Z's popular song, "99 Problems," may have steered clear from any controversy regarding its lyrics, it was Eminem's take on the song in his own tune, "So Much Better," that seemed to have caused the real issue. As the 2013 song extended the lyrics from "I got 99 problems and b*tch ain't one" to "I got 99 problems and a b*tch ain't one / She's all 99 of 'em; I need a machine gun." I don't think I need to explain this one. Why, Eminem? Just... Why?

OK... at a first listen, might not think much of it. However, considering that the term "Gold Digger" is a very gender-oriented, one-sided concept, it does bring the overall message of the song into question. It's still pretty catchy though. Damnit, Kanye.

Yes, a Taylor Swift song made this list. Unfortunately, the queen of girl power and squads may have given off quite a different impression with some of the lyrics in one of her songs. In fact, as one Her Campus writer pointed out, "Part of Taylor Swift’s shtick is to slut-shame in her lyrics. In 'Better Than Revenge,' she takes a swipe at a girl who apparently stole her boyfriend, 'She’s an actress/But she’s better known for the things that she does on the mattress.'" Shaming your romantic opponent for being sexual is not OK, Taylor.

Nothing says misogyny quite like referring to a woman as an inanimate item that can be purchased, like, well, fine china. The song includes such lyrics such as, "It's alright, I'm not dangerous / When you're mine, I'll be generous / You're irreplaceable; Collectible / Just like fine China." While I do understand what he was attempting to go for here, it is never OK to think of a woman as a possession.

As a feminist, it can be hard to even click play on the song above. Obviously, Snoop Dogg has had a reputation over the years for referring to women as "b*tches" in his music — and, oftentimes, he describes them as sex objects. However, this song took things to an all time low.

There's really no way to get around the lyrics: "Put Molly all in her champagne, she ain’t even know it/I took her home and I enjoyed that, she ain't even know it." Yep, that is actually a sample of some of the words used in this song. And, as expected, it sparked major controversy regarding the song's overall promotion of date rape culture.

Guns 'N Roses were a serious force of the '80s with their hit album, Appetite for Destruction. However, as The Guardian pointed out, when looking back at the album today, "the misogyny is just infantile posturing." And with the lyrics in this song like "Turn around b*tch I got a use for you / Besides you ain't got nothin' better to do / And I'm bored" there's really no getting around the issue with this one.

While this song may be fun to dance to in the club, the song did come under fire for its use of the lyrics, "Been around the world, don't speak the language / But your booty don't need explaining / All I really need to understand is / When you talk dirty to me." However, Jason Derulo's response was simply that he tries "to be conscious of offending anybody, but not that much. I really just try to do my thing and of course there is going to be backlash on every song that I do, so I don't worry myself too much on that. People saying things like 'objectifying women.' I'm like, 'What are you even talking about?'" Sorry, Jason, but not understanding what we mean by "objectifying women" doesn't make it OK.

Well, if the title of this song wasn't clear enough, Dr. Dre's 1992 hit song states in the chorus, "B*tches ain't sh*t but h*es and tricks / L*ck on these n*ts and s*ck the d*ck / Get the f*ck after you're done / And I hops in my ride to make a quick run." I mean, if that doesn't scream misogyny... I honestly don't know what does.

This song off of his 2013 album contains graphic descriptions such as, "Snatch the b*tch out her car through the window, she screamin’ / I body slam her onto the cement, until the concrete gave and created a sinkhole / Bury this stink h* in it, then paid to have the street re-paved." Um... not OK in the slightest. In fact, with continuous lyrics holding themes of violence and abuse, the Washington Post even argued that Eminem's success has largely revolved around misogynistic ideals.

This is just one of the many songs helmed by Ice Cube and Dr. Dre that have come under fire for being misogynistic — and it's pretty clear why with a single listen.

More like this
'Traumazine' Has Megan Thee Stallion Twitter Dancing Through Their Feelings
By Grace Wehniainen
Lauv Is No Stranger To Taylor Swift, Drake, Ed Sheeran, & Fame
By Alyssa Lapid
The Real Meaning Behind Marcus Mumford’s “Cannibal” Is Actually Really Dark
By El Hunt
Beyoncé & Madonna’s “Break My Soul” Remix Honors A Group Of Black Icons
By Stephanie Topacio Long
Get Even More From Bustle — Sign Up For The Newsletter