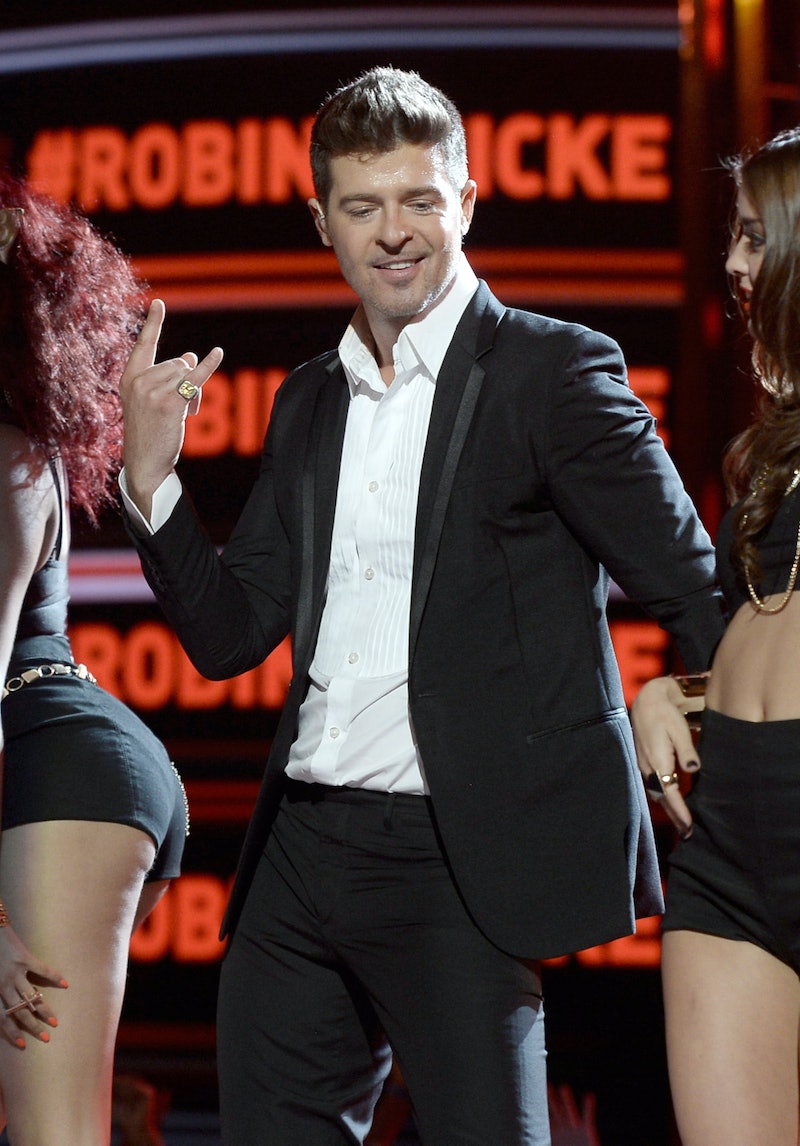 Robin Thicke's summer jam "Blurred Lines" — you know, the one that is never not on the radio? — has been getting some serious flack. The song, which features a chorus of "I know you want it" — and comes with a totally NSFW music video of naked models fawning over Thicke — has been accused of condoning sexual violence against women. Well, Thicke has finally responded to the criticism, saying, "I can't even dignify that with a response; that's ridiculous."

Fortunately, that's not all Thicke has to say about the controversial tune. When asked about the lyrics of the song, Thicke said that the "blurred lines" he sings about refers to the line between men and women, and the line between a "good girl" and "bad girl." "Even very good girls have a little bad side. You just have to know how to pull it out of them," said Thicke. Still, that doesn't exactly scream "willing participant."

And then there are those naked women in the music video. But Thicke insists that, if it were up to him, he wouldn't have made the NSFW version of the video in the first place. (Two versions were shot — the models are dressed in the video that is currently available for viewing on YouTube.) Apparently, we can thank the female director of the video, Diane Martel, for that idea. "I don't want it to be sleazy," Thicke said. "I've always been a gentleman. I've been with the same woman since I was a teenager. So I don't want to do anything that's inappropriate." It wasn't until his wife, actress Paula Patton, and her friends "insisted" that he put out the naked version of the video that Thicke thought it might be a good idea to do so.

While it's good to see Thicke acknowledge that the video may have been a bad idea from the start, we can't exactly ignore some of the other comments that Thicke made about "Blurred Lines." In an interview with GQ, Thicke said, "We tried to do everything that was taboo. Bestiality, drug injections, and everything that is completely derogatory towards women. Because all three of us are happily married with children, we were like, We're the perfect guys to make fun of this. People say, Hey, do you think this is degrading to women? I'm like, Of course it is. What a pleasure it is to degrade a woman. I've never gotten to do that before. I've always respected women. So we just wanted to turn it over on its head and make people go, Women and their bodies are beautiful. Men are always gonna want to follow them around."

Doesn't exactly seem like Thicke was all that interested in keeping it classy. In fact, based on his previous comments, Thicke's M.O. seemed to be more about making his song as edgy as possible than celebrating the wonders of a woman's body.

While Thicke may think that his public persona as a "good guy" who has been loyal to his wife all these years can trump his sleazy video, that's not exactly how things work — if a video is degrading to women, it's degrading, regardless of who is in front of the camera.

So, Robin Thicke, while "Blurred Lines" may still be bumpin' on every radio station, we hope that your next song and video reflect more of the respectful guy you claim to be.