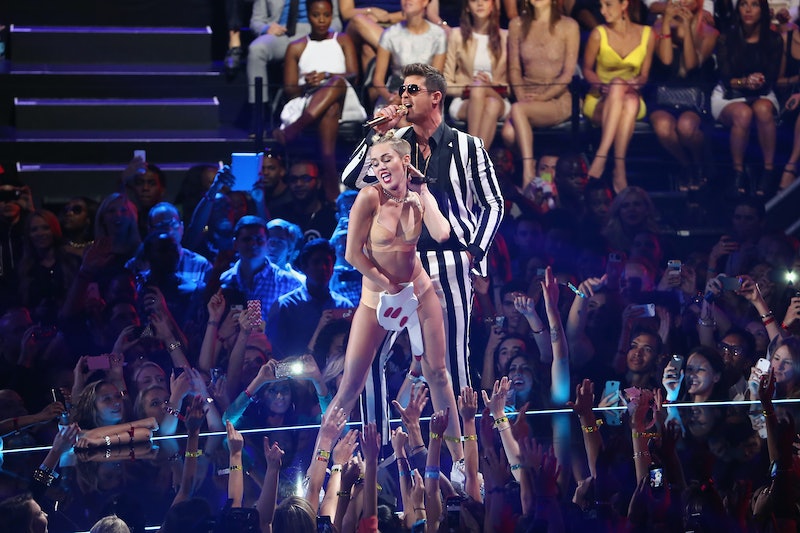 I have a confession to make: I'm a feminist in the streets and a lover of misogynistic music in the sheets. Sexist music is my dirty little not-so-secret pleasure, and many of my favorite songs are liberally peppered with gender-based epithets — songs that define a woman's worth by her willingness to bend over backwards (literally) for a man, only to be discarded like a used candy wrapper. The lyrics to Guns 'N Roses' "It's So Easy" come to mind, when Axl Rose growls, “Turn around, bitch, I got a use for you, besides, you ain’t got nothing better to do, and I’m bored.”

There are the songs that paint women as disposable playthings, and then there are the more violent tracks threatening murder and rape — written both by lesser known noise, punk, and metal bands, and by more popular acts, like, say, Eminem. "Kill You" was on constant rotation in high school and I'd always sing along. "Slut, think I won't choke no whore 'til her vocal chords don't work in her throat no more?" Yes, those words are unquestionably vile. And yet, that is not an underground song by any stretch of the imagination. Millions of women listen to it and others like it. So what's our damage? How can we espouse feminist views and sing along with such misogynistic lyrics? Is it patriarchy envy? Internalized misogyny? Straight up ignorance? It's not an easy answer.

The main reason I love the songs that I do is because of the music itself, and oftentimes the lyrics are a nasty afterthought that I try to ignore. That begs the question: why not find music that has a similar-sounding beat or hook or tune but with a better message? Believe me, I love great music with a great message, but, unfortunately, great music with a terrible message appeals to me, too. In part, I look at it as a kind of aural rubbernecking — forcing myself to stare deep into the abyss of rape culture and everyday sexism. It's repulsive, but I derive some kind of sick pleasure from "knowing the enemy," so to speak. That, and sometimes a track just appeals to me in a visceral way, as gross as it may be. Sometimes, there is no real explanation.

“Turn around, bitch, I got a use for you, besides, you ain’t got nothing better to do, and I’m bored.” - Guns 'N Roses

Since I'm not the only one who wrestles with these issues, I decided to reach out to a variety of women who listen to sexist music — most of whom happen to be in creative fields. I asked them what music they listen to that is misogynistic, what makes them consider that music misogynistic, how they reconcile their beliefs with their tastes, and if they draw the line when it comes to certain lyrical messages.

The answers I received provided a welcome moment of solidarity in our "hypocrisy." These women are all strong proponents of women's rights, and yet, when it comes to music, they don't always practice what they preach — or feel the need to. The genres they singled out ranged from dancehall, reggaeton, and mainstream hip hop to noise, punk, and metal (Kanye West, Vybz Kartel, Odd Future, Cannibal Corpse, and The Misfits were just a few of the artists name-dropped), and the rationale for listening to this music varied from woman to woman.

"I reconcile it the same way I do with anything else," explained fundraiser Olivia Webster, who cited "guilty pleasure top 40," reggae, hip hop, and country as the questionable music she listens to. "Most mainstream entertainment that is available for consumption is misogynistic and heteronormative to some degree. When I hear or read something problematic it definitely registers with me, but I compartmentalize so that I can enjoy things," she said. "Almost every feminist I know does the same thing from time to time."

"Slut, think I won't choke no whore 'til her vocal chords don't work in her throat no more?" - Eminem

This idea of having to shut down a part of your analytical faculties to enjoy questionable art was a major theme in the answers I received, as was the assertion that most feminists listen to some degree of sexist music. Culture writer and editor of 4U Mag Caitlin Donohue said that simple sexual objectification doesn't rank very high as far as problematic song tropes go. "There are so many inherent forms of sexism in the music industry in ALL genres, and slavish admiration for the female body is pretty much at the bottom of my list of things I'm worried about," she noted, referring to the reggaeton she enjoys.

But what about when the music goes beyond body worship, when it gets violent? Comedian, artist and rapper Suzy Mae suggested that we need to draw the line between what an artist says and what they sing about, listing Evil Nine, Death Grips, Snoop Dogg and Eminem as some of her favorites. "I create fantasies of murdering men, tales of being sexually explicit (that I’ve never experienced in real life), and generally create a persona that I would not want to run into in real life," she explained. "I understand that some artists draw a line between their personas and their real life selves — but we have a responsibility to clearly make that difference known."

To me, authorship does not equal approval, just as listenership does not equal approval. It's important when analyzing this type of music to not draw a connection between lyrical statements and the personal views of an artist "just because." Oftentimes a bad boy persona is just that — a persona — so when is a sexist message ironic or subversive, and when it is a hateful call to action? Since I'm not interested in digging into a stranger's psyche (and I know the futility of such an exercise), my engagement with an artist's intentions only goes so far. Once a piece of music is released into the world, it's my belief that each listener can imbue a work with his or her own meaning, too. That doesn't erase the original impetus for a song, but it can change it, if only for the individual listener.

Of all the women I interviewed, none were in favor of censoring sexist music. "I think if one bans one thing, they can ban everything," affirmed photographer Bianca Alexis who listens to T-Pain and industrial noise band Con-Dom, among others. "It's just best that if you like something, just like it and never have to explain yourself to anyone." This sentiment was echoed by many. The prospect of having to explain one's tastes didn't sit right with the women surveyed, although that doesn't mean they all could justify their own tastes to themselves. "I call myself out constantly" for listening to misogynistic music, admitted Julie Alvin, Deputy Editor at Bustle, who points to her enjoyment of OFWGKTA and The Misfits as particularly problematic. "I fully believe that our sexual desires can be divorced from our feminism, as Emily McCombs at XOJane suggested, but I don't feel I can make the same rationalization for my musical tastes, even though I would like to."

"I know you want itBut you're a good girlThe way you grab meMust wanna get nastyGo ahead, get at me." -Robin Thicke

While there is no goddess overlord of feminism to which any of us owes an explanation, that doesn't make this see saw of rationalization, guilt, and confusion any easier when you actually sit down and analyze why you like something that can perpetuate misogynistic mindsets in the world. And lest you think I am making light of men singing or rapping about treating women like garbage based on how they're dressed or how they act (or for no reason at all), I am all too personally aware of what sexism inspires in the wrong people. I have endured multiple acts of sexual assault in my life because I appeared to look like I "wanted it," but I still don't blame "Blurred Lines."

For this reason, I am against censorship of any kind. There can be Parental Advisories for minors, sure, because when you're younger you can misconstrue fantasy for reality and think an artist is advocating what he sings or raps. And feminists should definitely call out sexism where and when they see it. However, squashing artistic and creative expression through censorship laws or restrictions will not make violence against women disappear, nor will it foster a free-thinking society. So what can you do, as an individual, if you still stubbornly refuse to stop listening to these nasty songs?

As most of my survey-takers were artists, some mentioned that they used their day-to-day creative work to challenge sexism, so it's far more about what they're putting out into the world than what they're listening to. "As a black woman feminist in a white supremacist capitalist patriarchy, I am constantly walking this tight rope of racism and misogyny," said artist Damali Abrams, who indicated Kanye West as her "favorite misogynist." "It is extremely difficult because most things are racist and sexist and also homophobic/heteronormative. I hope that my own work provides an alternative to some of that," she affirmed. Artist Carol-Anne McFarlane agreed, recounting the misogynistic hip hop acts and dancehall artists she listens to. "I think that there is a lot of room to talk about these lyrics and how they affect us as a society. That discourse is what I strive for in my work," she concluded.

For me, handling the hypocrisy of loving sexist metal, punk, and hip hop was easy as a teenager — just don't think about it, right? — but I'll admit that as I've got older, it's gotten a bit harder to ignore. However, if there's anything I take away from my exercise of asking other women about their misogynistic musical tastes, it's an affirming reminder that there is no "correct" way to consume music and culture, just as there is no "correct" way to be a feminist — and what you put out into the world is more important than what you take in. People (and especially artists) are complicated, messy, cross-sections of contradictions. You are not necessarily complicit in a message because you choose to mindfully consume it. And while it would be far easier to only listen to empowering songs by Beyonce or Bikini Kill and live in a feminist-friendly bubble, I wasn't built that way. I'm just as intrigued by rage, by misogyny, by turmoil and by lyrics that provoke me and make me question and confront my own demons. And if they happen to be set to a sick beat? Even better.

More like this
Woodstock Co-Founder Michael Lang Faced Several Lawsuits After The 1999 Festival
By Brad Witter
Beyoncé & Madonna’s “Break My Soul” Remix Honors A Group Of Black Icons
By Stephanie Topacio Long
Anthony Templet Wants To “Live Normally” After Killing His Father
By Brad Witter
10 Must-Read New Books Out This Week
By K.W. Colyard
Get Even More From Bustle — Sign Up For The Newsletter