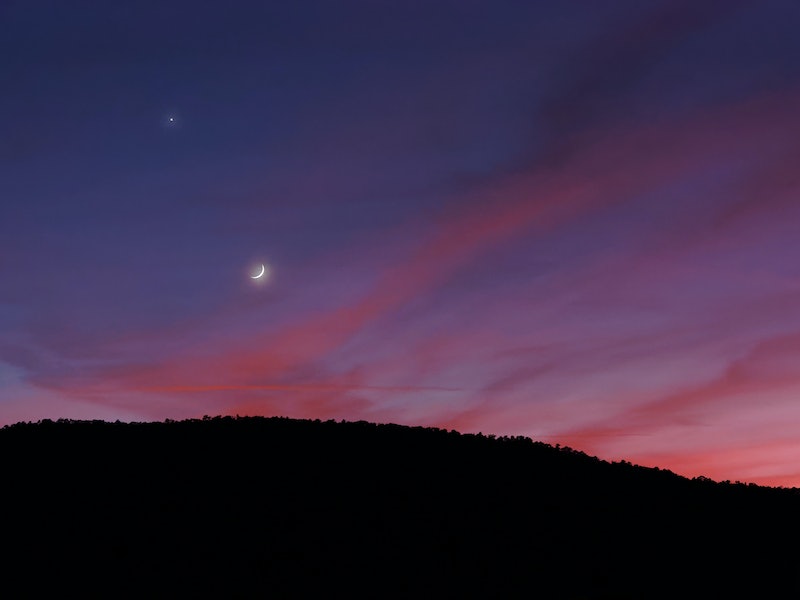 Even though I live in a very urban area (meaning, I can barely see the stars most nights), I still have a big interest in astronomy — there are few things I enjoy more than catching a glimpse of an extra pretty moon or planet. If you're an astronomy buff, you probably already know the planets are aligned right now. That's right: Right at this very moment, Mercury, Mars, Venus, Jupiter, and Saturn are in alignment for the first time in 11 years. This leads me to wonder: how long will the planets be aligned in 2016? How much time do we have to witness this glorious sight for ourselves?

First, let me fill you in on the planets currently in alignment. Yes, you can see the planets align from Earth; to catch it in action, the key is to wake up really early, about an hour and a half before the sun rises. Meteorologist Brian Lada explains, "Earlier than that, some of the planets will not be above the horizon and any later, the light from the sun will drown out the glimmer of the planets as daylight approaches."

This is pretty fool-proof, so long as you look southeast (if you're also bad with directions, have no fear — your phone can probably guide you) you should be able to see the planets. And no, you don't even need a telescope or any fancy equipment! Unfortunately for me, I live in an area with a decent amount of pollution, so my odds are not as good. However, many of us in the Northern Hemisphere should be able to see the alignment pretty well, especially if you're in area that's not very lit up. And here, of course, is the answer to our initial question: This time round, the planets will be aligned from Jan. 20 to Feb. 20. That means you've got not quite four weeks left to see it for yourself, as of this writing.

But let's say you completely miss seeing the planets this time around (or you're in the North Pole, where they apparently are not visible). Fear not! You are not entirely out of luck for 2016. The planets are likely to align again in August 2016. The predicted date for visibility is Aug. 13, 2016, and will last roughly a week. This will actually include the same five planets; however, scientists predict Mercury and Venus may "sit low" in the horizon, making it harder for us in the Northern Hemisphere to view them. Womp, womp. Fair is fair, though, right?

In total, this gives us about five weeks full of chances to witness the planets in alignment during the course of 2016. As of right now, it appears the planets won't be in alignment for a long time after this year: Apparently, the five planets aren't predicted to align again until the year 2040. While it's safe to assume many of us will still be alive and well at that point, that's still a long time to wait, so if you value star-gazing, definitely prioritize getting up and catching a glimpse of those lovely planets. Plus: The planets will be aligned over Valentine's Day. Sure, waking up early in general isn't the most romantic activity, but to catch a pretty glimpse of something so rarely visible? That, plus breakfast in bed, seems like the perfect start to Valentine's Day at home.