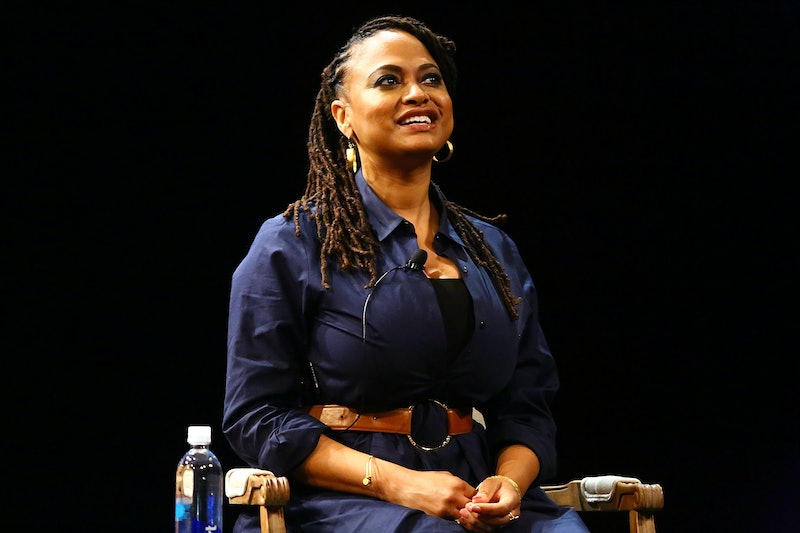 By now, it's no secret that the 2016 Academy Awards are so white — the whitest since the 2015 nominations, that is. The Saturday Night Live writers skewered #OscarsSoWhite on the most recent episode, and just about everyone in Hollywood put in their two cents on the fact that the nominations this year egregiously and systemically failed actors, directors, producers, et. al. of color — especially the black community in Hollywood. At Sundance Film Festival on Sunday, Ava DuVernay spoke about the Oscars diversity issue, saying part of the debacle lies with the use of the word "diversity" itself. DuVernay thinks the D word doesn't adequately represent just how urgent and pervasive the exclusion of minorities in Hollywood is, and she's right: the language needs to change, along with the members of the Academy (which of course, the Academy pledged to do over the coming years).

DuVernay, who was famously snubbed for her direction of Selma at the 2015 Oscars (along with star David Oyelowo, who somehow did not receive a nod for his portrayal of Dr. Martin Luther King, Jr), talked about the failure of the word "diversity" at a lunch hosted by her film collective Array along with IndieGogo. "We're hearing a lot about diversity," DuVernay said. "I hate that word so much." Speaking to the New York Times, DuVernay went on to explain:

I feel [diversity] is a medicinal word that has no emotional resonance, and this is a really emotional issue. It’s emotional for artists who are women and people of color to have less value placed on our worldview.

As usual, DuVernay hits the nail on the head. Yes, it's good and productive that conversations are happening about the Academy's "diversity" problem, but with so much talk, the word loses meaning. It's like when you say a word over and over again, to the point where it sounds wrong and looks wrong spelled on paper: it becomes meaningless. That's not to say that the diversity problem itself is meaningless; DuVernay offered more potent and indicative synonyms to replace the D word — inclusion or belonging.

“There’s a belonging problem in Hollywood. Who dictates who belongs? The very body who dictates that looks all one way," DuVernay said.

If you replace diversity with belonging or inclusion even in casual rhetoric, the problem immediately sounds more urgent. "The Oscars Have An Inclusion Problem" or "The Oscars Have A Belonging Problem" more accurately convey a sense of exclusion and place the onus on the Academy itself for deliberately overlooking or excluding "inclusion" implies there is definitely exclusion in a way the word "diversity" does not do so directly.

Yes, diversity is the issue here, but that word doesn't point fingers where they need to be pointed. And the Academy has finally seemed to have taken note, what with their monumental (though quite late in the game) decision on Friday to change its voting and membership.

But what really strikes true about DuVernay's statement is the fact that "diversity" has become a word devoid of emotion. It's the kind of emotion that led Academy President Cheryl Boone Isaacs to issue a massive overhaul of the Academy's membership and voting processes, the details of which were sent out in a letter to Academy members. She pledged to double the number of women and minorities in the Academy by 2020. DuVernay tweeted the letter she received detailing the changes, saying it was a small step in the right direction, and echoed these sentiments on Sunday. That emotion came through in Isaacs' address:

I’d like to acknowledge the wonderful work of this year’s nominees. While we celebrate their extraordinary achievements, I am both heartbroken and frustrated about the lack of inclusion. This is a difficult but important conversation, and it’s time for big changes.

"Heartbreak" is much more poignant and potent that "diversity problem." The words from Isaacs and DuVernay's proposal of using "belonging and exclusion" call to mind some triumphant, emotional speeches from Lupita Nyong'o and Viola Davis. Nyong'o's acceptance speech in 2014 for Best Supporting Actress for 12 Years A Slave elicited a wave of emotion, when she said: "When I look down at this golden statue, may it remind me and every little child that no matter where you’re from, your dreams are valid. Thank you."

Davis delivered a similar, gut-wrenching and beautiful truth when accepting her Emmy Award for Lead Actress in How to Get Away With Murder: "The only thing that separates women of color from anyone else is opportunity. You cannot win an Emmy for roles that are simply not there," Davis said.

Now that is the kind of language that needs to be in every Oscars' conversation, so that the "diversity problem" doesn't just become another meaningless set of buzzwords.