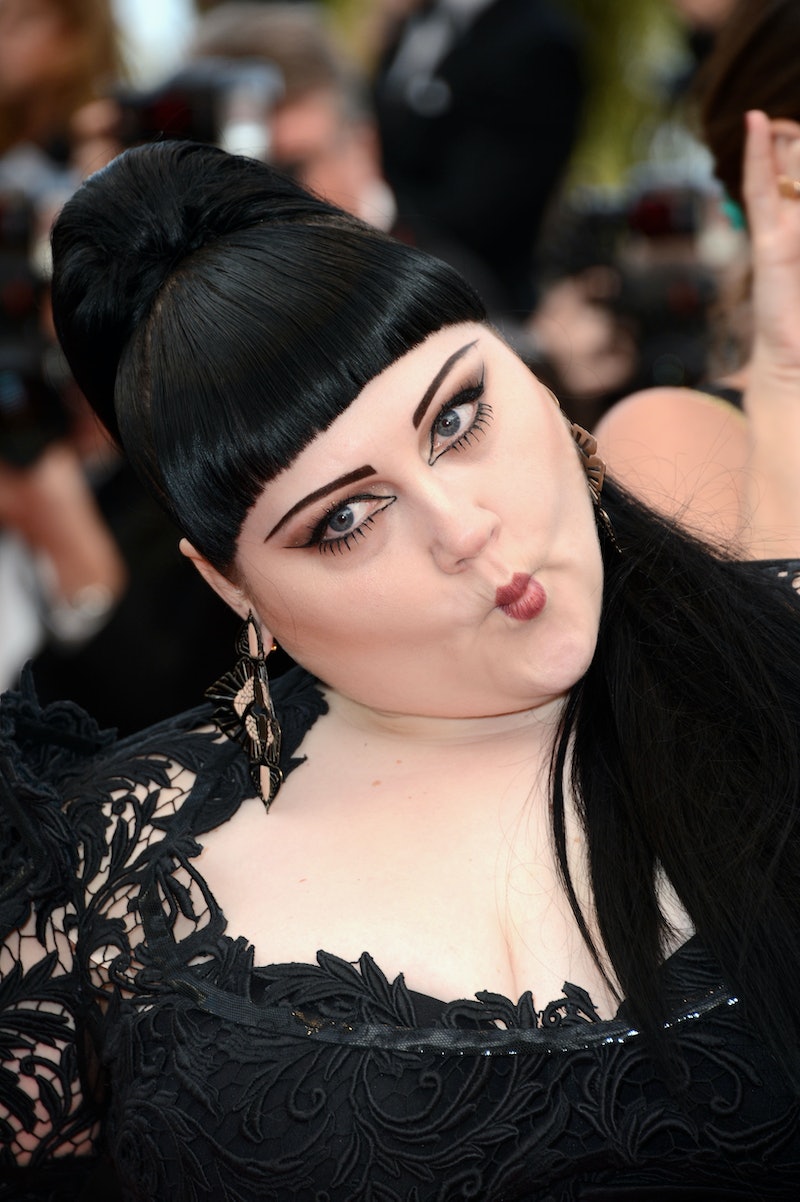 I can't remember much of what I was doing at 15 besides trying to perfect the too-much-eyeliner look while screaming at The CW every time Peyton Sawyer and Lucas Scott broke up. But I do remember the moment I first saw Beth Ditto. Her appearance in my life came during one of my bouts of thinness experienced after compulsively exercising for months on end and throwing out my lunch in the bins outside school so no one could see me do it.

A friend of mine had Internet on his Nokia phone (a rarity for small town 15-year-olds in 2006), and for whatever fateful reason, an image of Beth Ditto performing with The Gossip came up on the screen while we were waiting for the bus. She was in a royal blue bodysuit that looked to be made of lycra or faux leather. She was sweating — moisture visible in her short, cropped hair. She had tattoos. And she was fat. What's more was that she wasn't hiding this fact. The cellulite on her legs and arms was totally visible, and she was reveling in herself. Years before "body positivity" would become a mainstream catch phrase, it was the first time I saw a fat woman embracing her body so publicly, and with not a hint of apology.

Fast forward to a year later, when her op-ed "What Would Beth Ditto Do?" hit The Guardian. This was five years before I'd discover plus size bloggers; six years before I'd write my first Bustle essay about loving my fat — an essay that feels almost young and foreign now; six years before Gabi Gregg would design a plus size swimsuit that'd change the face of an industry. Yet it was the first piece of fat positive writing I ever came across. "Reclaiming the word fat was the most empowering step in my progress," she wrote. "I stopped using it for insult or degradation and instead replaced it with truth, because the truth is that I am fat, and that's OK. So now when someone calls me fat, I agree, whereas before I would get embarrassed and emotional."

The thought had never occurred to me. "Fat" was supposed to be a whole heap of wrong. It was unhealthy. It was unattractive. It was an epidemic. These were the things people accepted as fact. Yet here was Beth Ditto, telling me to "start [a self love journey] by wearing clothes with the intention of reclaiming your self esteem, clothes that make you feel good, confident, sexy even, instead of clothes meant to hide your body. You can also look at your body more. A lot of us ignore our bodies. Connect with your body instead, especially when naked."

In her 10+ years on the scene, there has always been a theatricality to Ditto. In her Notes On "Camp" circa 1964, Susan Sontag wrote, "Indeed the essence of Camp is its love of the unnatural: Of artifice and exaggeration." That's what Ditto was to me. She was unnatural, in that she was a fat woman refusing to hide regardless of social dogma. She was exaggeration incarnate, unafraid of a dramatic makeup look or almost unbearably kitsch outfit. At first, she was even artifice: A deceitful personification of the misguided premise that fat people shouldn't be trying to "fix" their fatness.

In time, however, I realized this latter part was wrong. She wasn't artifice at all. She was truth. She just knew the truths before a lot of the rest of us did. When I first heard her sing "I'm doing this for you because it's easier to lose; and it's hard to face the truth, when you think you're dying," in 2006, I had no idea what those words meant. Years later, I can't help but perceive their correlation to existing as a fat person. Maybe she was on that stage for us — for me. Maybe she was stripping down to her knickers because the rest of us didn't think we could. For whatever reason, becoming conscious of a society that lies and financially feeds off shaming people over their bodies is a lot harder to do than giving in and listening to that society.

As far as I can tell, Ditto has never publicly identified as "body positive." There aren't any interviews where she self-describes as an ally to the movement or anything of the sort. I do know that, in a moment that led to pure bliss on my end, she once liked my Instagram photo, and that the photo in question was tagged #BodyPositive. But that's about it.

Although I don't believe in assigning the BoPo label to people simply for doing one good deed or sharing a picture of their size 2 self eating a cheeseburger, Ditto's actions and entire public persona have reigned of the core principals of body positive politics for over a decade. When she posed nude for LOVE Magazine in 2009, she became one of the only fat women besides myself I had ever seen (almost) naked. And she was glorious. In what I still believe is one of the most brilliant profiles of a celebrity I've ever read, she also told Advocate in 2012 that she welcomes people to "talk about her body as much as her music."

"I think it’s great. I feel like it’s just like taking one for the team. I think it’s really cool that there are people like Adele on the cover of Vogue and Rolling Stone, and like I think it’s really important that people are talking about your body, because if they don’t, then you’ll never be able to break that barrier,” she told the publication. She added that when a 200-pound girl wants to be a singer in a band these days, “It’s going to be a lot fucking easier [...] I know [some musicians] are like, ‘Oh, it’s all about the music.’ But I come from riot grrrl, where it’s not just about the music, it’s about the political message, and that’s just as important as the music to me. I don’t mind being a guinea pig.”

In a world obsessed with beauty — "beauty" in the most mainstream, supposedly aspirational sense of the word — Ditto's lack of apology over existing in the way she deems fit is radical. "Thanks to capitalism, the importance placed on beauty has never been so manipulated," she wrote in her Guardian editorial. "We are [...] force-fed ads that tell us how pathetic we are: That we will never be loved, happy, or valuable unless we have the body, the face, the hair, even the personality that will apparently be ours, if only we buy their products." Here she touches upon the intersection of beauty standards and corporations. It's an intersection some would argue is at the heart of most beauty standards. And it's an intersection she defies with her every move.

Even when Ditto is participating in what some might call "mainstream fashion," like walking the runway shows of couture brands like Jean Paul Gaultier or Marc Jacobs, or designing a T-shirt for Gaultier, she is being subversive. She is questioning every so-called rule, be it that lipstick must be only red or pink, or that women must wear shapewear if they are fat, or that non A-line silhouettes are exclusively off limits when you're above 160 pounds and female. She's throwing away every guideline that says "fat women can't" or "this is what a woman looks like" or "queer women should," and she's cultivating her own narrative of indie rock and glam and alternativeness and VBOs and sexual agency.

Ditto has been just about every "bad" thing you can be by American standards. She grew up poor. She has struggled with both physical (sarcoidosis) and mental health (depression). She is a lesbian. And she is fat. Yet she is irrevocably bold. It's not even that she fits into the "what a hero for overcoming adversity" trope. It's that she never makes it seem like she's been victim to adversity at all. She never plays the "love me, I'm an underdog" card, because there is so much more to her existence than that. Despite ticking all the boxes of "reasons to hate yourself," as defined by a fucked up culture, her love for herself is tangible.

And in a world that also says that loving yourself is vain, shallow, and wrong — especially if you are a fat or queer person — that self love becomes a tool. It's a tool that inspires not just body positivity, but fat positivity. We've been seeing a hell of a lot of the former as of late infiltrating mainstream conversations, but the latter could still use some elevating. And Beth Ditto has always helped us do just that.

More like this
Instagram & Facebook May Finally Lift Their Notorious Nudity Ban
By Allie Fasanella
Selena Gomez Dismissed Trolls' Comments About Her Body After The Golden Globes
By Stephanie Topacio Long
Phoebe Dynevor Serves ‘Bridgerton’ Underboob In Stunning Floral Gown
By El Hunt
9 Valentine's Day Hairstyles For 2023 That Look So Dreamy
By Audrey Noble
Get Even More From Bustle — Sign Up For The Newsletter
From hair trends to relationship advice, our daily newsletter has everything you need to sound like a person who’s on TikTok, even if you aren’t.