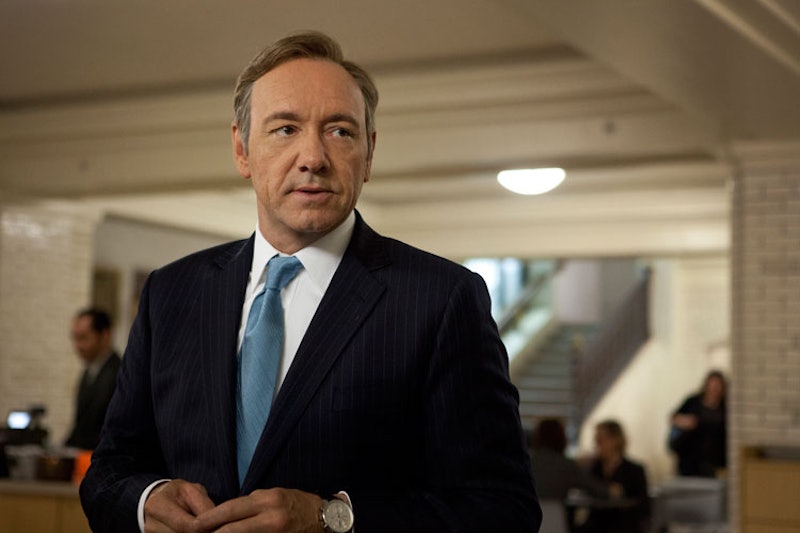 If you were Frank Underwood, chances are you’d be shoveling like crazy to hide all of the dirt in your past too. In fact, covering up all of your secrets might even become your full-time job. And that’s just what we find Frank doing in the latest promo for House of Cards Season 4. The clip is brief, but in it we find Frank Underwood and his ever-loyal Chief of Staff, doing his dirty work. As the camera pans out, the audience sees that Doug Stamper's shoveling is really a publicity stunt, a public tree planting with a number of people standing around to watch and applaud politely. But for fans of the show, that sound of the shovel hitting dirt is unmistakable. For viewers, that sound is reminiscent of all the dirt Frank has tried to hide in the past and all the dirt Frank will most likely keep hiding in Season 4.

The new season premieres on Netflix on March 4, and, aside from the well-placed teasers and trailers, there is little information out there on Season 4. But given that Season 3 left fans in the lurch, with Frank Underwood’s wife, Claire, walking out of his office and leaving him before his New Hampshire primary, the world is dying to know whether or not Frank is going to be able to keep all of his secrets under wraps, especially without the help of Claire and with the spotlight of a national election shining brightly upon him.

But what do I mean when I say dirt? Well, all of Frank Underwood’s sins, of course: The affair with Zoe, murdering Peter Russo and making it look like a suicide, killing Zoe to cover up the Russo murder, and completely disrespecting his dutiful wife. And those are just to name a few, because this is one politician who has a lot of dirt to disguise going into Season 4, especially with the attention of the election spreading his life wide open.

There’s no hiding from the truth, but, from the looks of this promo, that is just what Frank is going to try to continue to do in Season 4: Keep up appearances while all of his dark and dirty secrets linger threateningly below the surface. Check out the full promo below.